Those who Lust and those who Lack: Tyranny and Passivity in Early Modern English writing on the Ottomans

In A Voyage into the Levant (1636), Henry Blount creates a number of stereotyped images of Turkish people he encountered during his travels through the Ottoman Empire by stating that they were ‘addict[ed] to sodomy’ (Tiryakioglu, 2015, p. 134).  Blount, according to Rosli and Omar (2017), travelled to the Levant and stayed there for 52 days.  He then made a five-day stop in Constantinople before making his way to Egypt.  Blount even goes as far as to circulate false information about the Prophet Muhammad (PBUH).  He claims that the Prophet himself thought those who followed his teachings were ‘rude and sensual’ (Blount, 1636, p. 121) and that he wished to trick them into believing in the false paradise for which they were fighting (for example, when the Ottomans invaded the Levant in 1516): ‘Mahomet [...] made not his Paradise to conflict in Visions, and Hallelujahs; but in delicious fare, pleasant Gardens, and Wenches with great eyes [...] he promises that their Souls shall suddenly have given them young lusty bodies, and set in Paradise, eternally to enjoy those pleasures [...]’ (p.122). 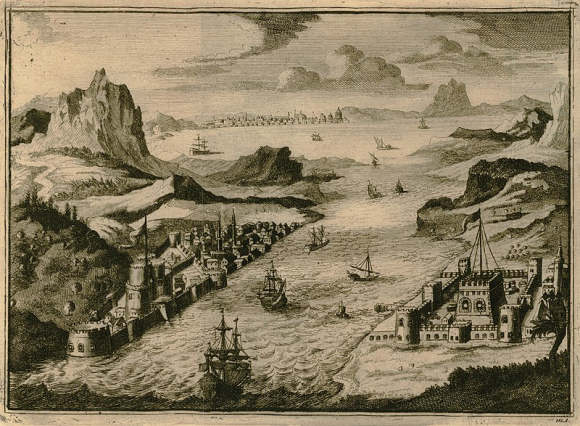 Thus, it appears that Blount was attempting to demonise the Ottomans in the minds of his reader due to English anxieties about increased Anglo-Ottoman trade at the start of the 17th century (Ágoston, 2013; Erkoç, 2016).  This attempt to demonise the Ottomans as self-indulgent and barbaric also recurs in The Totall Discourse of the Rare Adventures and Painfull Peregrinations (1632) by William Lithgow.  Lithgow recounts what he witnessed of the Ottoman slave trade whilst visiting a market in Constantinople and, as a result of his experiences, warns his reader that Turkish people are ‘extremely inclined to all sorts of lascivious luxury ... besides all their sensual and incestuous lusts, unto sodomy, which they account as a dainty to digest [with] all their other libidinous pleasures’ (Lithgow, 1632, p.105).

The stereotyped cultural Ottoman figure that features in Blount’s and Lithgow’s writing also affected early modern dramatic portrayals of Ottomans as violent, lustful, and, politically corrupt.  The theatrical Turkish type may have generally encouraged early modern resurgences of crusading rhetoric, whereby the First Crusade in 1095 was seen as a means to relieve the Orient from what European Christians perceived as barbarism.  However, the endorsement of English crusading rhetoric against Ottomans in early modern writing are a point of contention for Roger Boyle in his play, The Tragedy of Mustapha (1665).  Boyle depicts his Sultan Solyman’s killing of Mustapha, not as being driven by violent impulse but instead, as being driven by the Sultan’s fear that his throne—and therefore, the safety of his subjects—is at risk of being disrupted by Mustapha.  Mustapha is also humanised by Boyle because, in submitting to his death sentence without retaliation, Mustapha fulfils his political duty to his father.  Thus, Boyle represents the disastrous consequences that occur (in the form of Mustapha’s death) when a ruler forces their actions to align with, or to conform to, the expectations of the stereotyped violent Ottoman.

Aisha Hussain
Doctoral researcher at the School of English, University of Salford

Further reading:
Ágoston, G. (2013). ‘War-Winning Weapons? On the Decisiveness of Ottoman Firearms from the Siege of Constantinople (1453) to the Battle of Mohács (1526)’. Journal of Turkish Studies, 39 (1), pp.129-143.
Blount, H. (1636). A Voyage into the Levant. London: Andrew Crooke.
Erkoç, S. (2016). ‘Dealing with Tyranny: Fulke Greville's Mustapha in the Context of His Other Writings and of His View on Anglo-Ottoman Relations’. The Journal of Ottoman Studies, 47(1), pp.265-90.
Boyle, R. (1665). The Tragedy of Mustapha, the son of Solyman the Magnificent. In: The Dramatic Works of Roger Boyle, Earl of Orrery: Volume One, ed. by William Smith Clark II. (1937). Massachusetts: Harvard University Press.
Lithgow, W. (1632). The Totall Discourse of the Rare Adventures and Painefull Peregrinations of Long Nineteene Yeares Travailes from Scotland to the Most Famous Kingdomes in Europe, Asia and Affrica.
Rosli, U.N.B.M., (2017). ‘References of Sexuality in Relation to the Prophet Muhammad (pbuh) in 17th-19th Century Selected French and English Orientalist Travelogues’. Arab World English Journal, 1(4), pp.68-82.
Tiryakioglu, N. O. (2015). The Western image of Turks from the Middle Ages to the 21st century: the myth of 'terrible Turk' and 'lustful Turk’. Published Doctoral Dissertation, Nottingham Trent University.

This blog post is part of a collaborative series with Medieval and Early Modern Orients (MEMOs).  On the last Monday of every month, both Untold Lives and MEMOs' own blog will feature a post written by a member of the MEMOs team, showcasing their research in the British Library collections.  Follow the conversation on Twitter with the hashtag #BLMEMOS.