Rescue at Sea of a Man Overboard

On 30 October 1879, the Government of India forwarded to the India Office an extract from a letter written by Captain Methven of the P&O ship Kaisar-i-Hind.  Captain Methven wished to notify his employers and the authorities of the gallant act of bravery on the part of one of his officers in rescuing one of his shipmates from drowning.  Correspondence in a file in the India Office Records described the rescue. 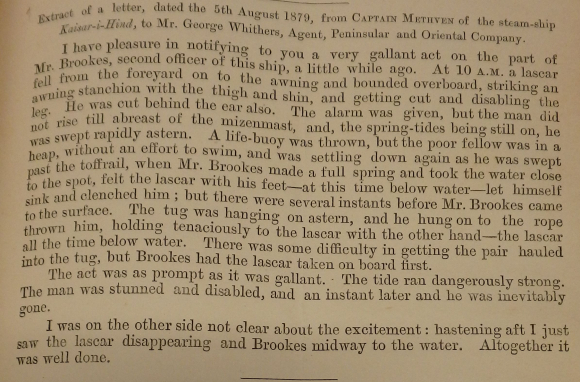 This occurred at 10 am on 5 August, when an Indian seaman fell from the foreyard (the lowest yard on a ship's foremast) on to the awning and then overboard, striking an awning stanchion on the way and sustaining several injuries in the process.  The alarm was raised, but the seaman was quickly swept astern of the ship.  A life-buoy was thrown to the stricken man but he was too weak to hold on to it.  As described by the Captain, the second officer G C Brookes ‘made a full spring and took the water close to the spot, felt the lascar with his feet – at this time below the water – let himself sink and clenched him; but there were several instants before Mr Brookes came to the surface’.  A rope was thrown, which Brookes was able to grab while holding tightly to the Indian seaman, and both men were pulled aboard the ship.  Of the rescue Captain Methven wrote: ‘The act was as prompt as it was gallant.  The tide ran dangerously strong.  The man was stunned and disabled, and an instant later and he was inevitable gone…. Altogether it was well done’. 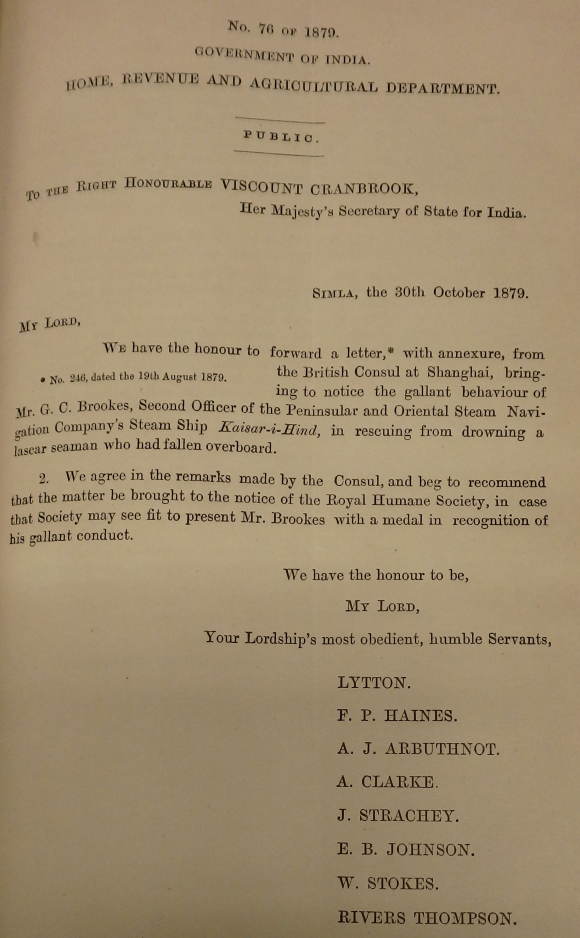 The Government of India agreed with this, and recommended that the India Office bring it to the attention of the Royal Humane Society.  The incident was widely reported in the newspapers of the time, but tragically the Shipping and Mercantile Gazette reported on 29 September 1879 that the Indian seaman had died the same night from the injuries he received in the fall. 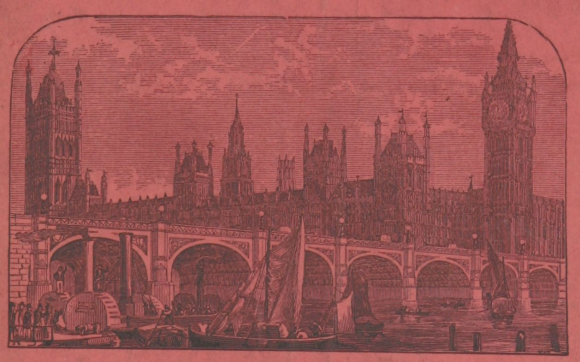 Newspaper reports indicate that Brookes had been involved in another rescue four years previously in London.  On 7 August 1875, the South London Chronicle reported that a man named Nicholas Socoloff, a chiropodist who worked at the London Bridge Turkish Baths, had ‘purposely fallen’ from a boat into the Thames at Westminster Bridge.  Brookes had jumped into the water and supported Socoloff until help arrived to pull him from the water.  Sadly, it was reported that three days later Socoloff hanged himself at his lodgings while in a state of temporary insanity.

The Royal Humane Society was founded in London in 1774 with the purpose of granting awards in recognition of acts of bravery in saving human life.  For the rescue of Socoloff in 1875 the RHS awarded Brookes a bronze medal, and in 1879 he was awarded a bronze clasp for the rescue of the Indian seaman.

Further Reading:
Recommends that the gallant conduct of G C Brookes, Second Officer of the Peninsular & Oriental Steam Navigation Company's Steam Ship Kaisar-i-Hind, in rescuing from drowning a lascar seaman who had fallen overboard be brought to the notice of the Royal Humane Society, 1879, Shelfmark: IOR/L/PJ/3/1124 No.120.