The Archive of the Hakluyt Society

The Hakluyt Society is a subscription organisation whose aim is to advance scholarship by producing scholarly and academic editions relating to historic voyages, travels, and works of geographical interest, from both printed and manuscript sources.  The Society was founded in 1846 and is named in honour of Richard Hakluyt (1552-1616), the Elizabethan collector, writer, and editor of geographical literature who is particularly remembered for works relating to the exploration of North America.  Originally the Hakluyt Society published works relating to travel before 1700, but over the years the Society has expanded its scope beyond that date and extended its work to conferences, lectures, and the award of grants and prizes. 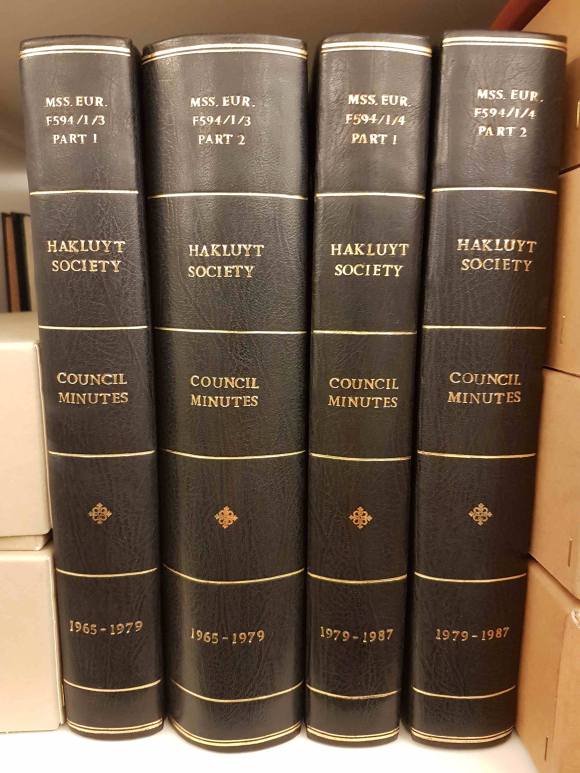 Mss Eur F594/1/3-4: Hakluyt Society Council Minutes, 1965-1987. These minutes have been conserved and rebound with the financial assistance of the Hakluyt Society.

We are pleased to announce that the archive of the Hakluyt Society is now catalogued as part of the India Office Private Papers and available to researchers.  Descriptions can be found via the British Library’s Explore Archives and Manuscripts catalogue, and researchers can consult material in our Asian and African Studies Reading Room.  The Hakluyt Society has had many links with the India Office and its predecessor the East India Company over the years.  Its Presidents Sir Henry Yule, Sir William Foster and Sir Gilbert Laithwaite all served at the India Office, Foster being one of the Hakluyt Society’s longest serving Officers as President from 1928-1945, and Vice-President from 1945-1951.  The Society has also had long-term connections with the Map Room and the Department of Printed Books first at the British Museum and subsequently at the British Library.  Hakluyt Presidents with British Library connections include Edward Lynam, Charles F. Beckingham and Sarah Tyacke.

The archive contains papers relating to the running of the Society, including signed Council Minutes, Committee papers, administrative records and financial papers, and correspondence and other papers generated by the work of the Society's various Honorary Secretaries.  These include Raleigh A. Skelton - known as Peter (who worked in the Department of Printed Books and then the Map Room at the British Library), the geographer Eila Campbell (Birkbeck College, University of London), and the geographer Terence E. Armstrong (Scott Polar Research Institute, Cambridge University).

The bulk of the archive relates to the Hakluyt Society's activities in the 20th century, and particularly in the period after the Second World War.  Some 19th century materials do survive, including the Society's Record Book from 1846, Council minutes from its first meeting in 1847, printed Annual Reports from 1849, and some correspondence with contributors from the 1890s.  A significant amount of the later material relates to proposals for volumes (not always completed or published) together with correspondence with the Society's contributors.  These include significant publications for the Society, such as The Journals of Captain James Cook on his Voyages of Discovery… (Cambridge: Published for the Hakluyt Society at the University Press, 1955-1974).  Other material relates to the relationship between the Hakluyt Society its publishers and distributors.  There is only limited material relating to individual members of the Society, and these include published membership lists, and subscription accounts.  The Hakluyt Society archive also contains some manuscript and original material collected by or deposited with the Society.