Sarah Biffen was a celebrated Georgian painter.  At the height of her career, she was patronised by royalty and commended by the Society of Arts.  She was self-taught, and her achievements are all the more laudable in consideration to the circumstances of her birth: born to a Somerset farming family with no arms nor hands, and only vestigial legs. 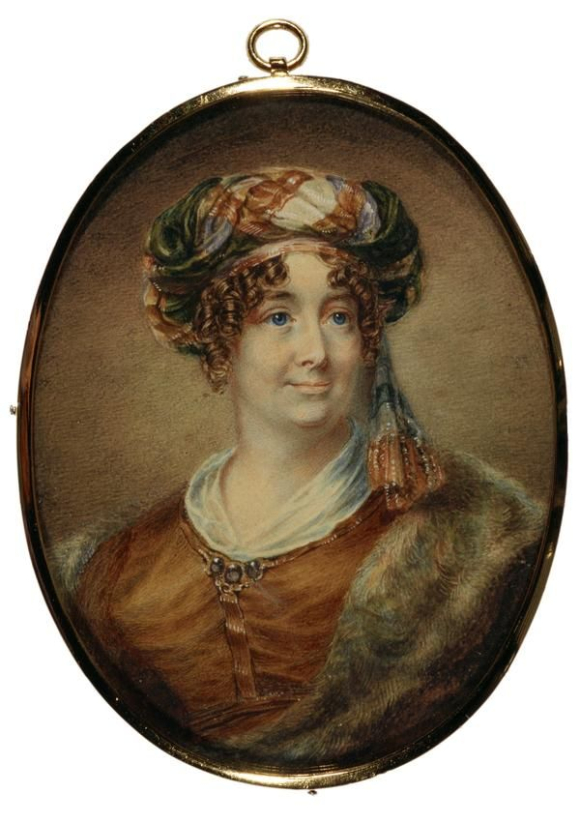 At the will of her parents, Biffen spent her formative years travelling from town to town as the subject of public exhibition.  She was bound to her ‘conductor’, Emmanuel Dukes, with whom she toured fairs where curious punters would pay to watch her sew, draw and paint using her mouth.  The young artist’s life during these years is chronicled by handbills and ephemera, many examples of which survive in the British Library collections. 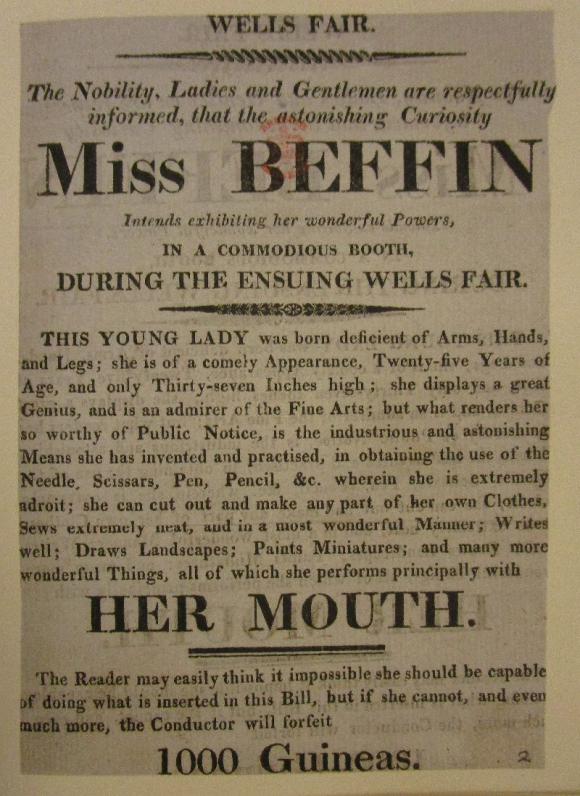 The greatest density of this material can be found among Lysons’s Collectanea, several scrapbooks compiled by the antiquarian Daniel Lysons during the early 19th century.  Lysons was fascinated with a variety of topics including the people whom he encountered at fairs and exhibitions, and he accumulated a wide selection of printed ephemera on this subject.  Lysons’s Collectanea offers a glimpse into the touring life of Sarah Biffen, providing handbills from Tetford, Sheffield, Wells, Rochester, and Lyson’s own hometown, Gloucester.  These handbills advertised the opportunity for members of the public to observe Biffen for an admittance of 1s or 6d for children, servants and ‘working people’.  These advertisements highlight Biffen’s exceptional artistry as a selling point, and challenge doubting readers with a wager: ’if she cannot [do as claimed], and even much more, the Conductor will forfeit one thousand guineas’.  Touring the fairs was big business and there was money to be made.  Her miniatures often sold for three guineas each. However it is believed that Dukes compensated Biffen as little as £5 a year. 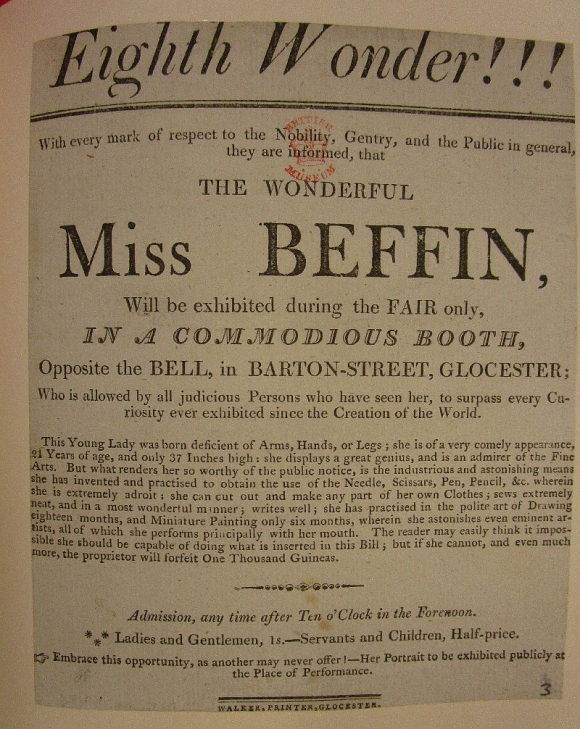 Handbill for Barton Fair, Gloucester in 1810, where Miss Beffin was advertised as ‘the eighth wonder!!!’

Lysons most likely met Biffen at the Barton Fair, Gloucester in 1810, where she was advertised as ‘the eighth wonder!!!’.  This encounter sparked a correspondence between the two, which Lysons pasted alongside his printed ephemera in the Collectanea.  The letters illustrate that Lysons wrote to Biffen, asking questions about her life and experiences.  Biffen subsequently provides Lysons with a short biographical note.  Interestingly, in one of her responses, dated 25 March 1810, she explains: ‘I feel wonderful pleasure in being exhibited and will go so far as to say I think it my duty’.  Yet sixteen years later, her sentiments are changed.  In 1826, Lysons received a proposal for a new print of Biffen’s work.  In the printed matter, she recounts her time on tour with Dukes unfavourably: ‘the result was by no means equal to the expectations raised, and fourteen years of my life thus passed away without any substantial benefits to me’.  Between those years Biffen’s life had changed considerably, and so too had her opinion of her early life as a touring exhibition.

Lysons’s collection of printed and manuscript materials relating to Biffen opens a unique insight into how the artist lived and felt during her early life, and also how her own opinion of her early life changed.  It is rare to gain such an intimate glimpse into the life of one such as Biffen, yet countless similar stories can be uncovered throughout the rich pages of Lysons’s Collectanea.