In December 1880 thirteen-year-old Ada Rose Mills was removed from the Soldiers' Daughters' Home at Hampstead because she had started to suffer from frequent epileptic fits.  Girls applying for a place at the Home underwent a medical examination and only those judged to be in good physical and mental health were accepted.  If, after admission, a girl was found be afflicted with ‘a malignant, infectious, or incurable disorder’, ‘any bodily or mental defect’, or subject to fits, she was returned immediately to those who recommended or placed her in the Home.  Poor Ada Rose was sent to her widowed mother in Ireland. 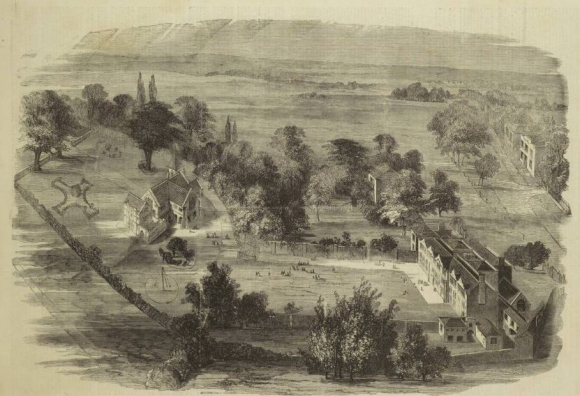 The Soldiers' Daughters' Home at Rosslyn Hill, Hampstead was founded in 1855.  Its object was ‘to nurse, clothe, board, and educate the destitute female children, orphans or not, of Soldiers in Her Majesty’s Army, born during the service, or subsequent to the honourable discharge, of the father’.  The Home aimed to instruct the girls in ‘industrial habits’ fitting them for domestic service.  Scholarships were granted to the ‘most industrious’ to support them whilst training as regimental or parish schoolmistresses.

There were two classes of admission: by election with places supported by the Foundation, and by payment of fees.  This was the order of preference for admission when destitution was proved:
• Total orphans
• Motherless daughters of soldiers
• Fatherless daughters of soldiers
• Girls whose parents were still alive, with the father on active or foreign service.
Two sisters could not attend at the same time unless there were exceptional circumstances.

Girls were taken in from under three years of age up to thirteen, and they could not remain after they reached sixteen.  The Home’s Committee tried to find a suitable situation for each girl, and presented her with an outfit including a Bible and prayer book.  Ex-pupils were considered to be under partial guardianship whilst they remained unmarried and they could return to live at the Home temporarily if seeking a job.

Ada Rose Mills entered the Soldiers' Daughters' Home on 14 June 1877 as a scholar paid for by the Secretary of State for India.  She was born in Bangalore on 21 June 1867, the daughter of Sergeant William Mills of the Madras Sappers and Miners and his wife Annie née Hopkins.  Five siblings were also born in India.

William Mills died of a brain tumour at Secunderabad on 5 September 1873.  His widow Annie was living in Dublin when her son Archibald George enlisted in the Royal Engineers in July 1879 aged fourteen.  He had previously attended the Royal Military Asylum Chelsea for nearly three years as an apprentice.  Annie later moved to Gosport in Hampshire.

The India Office gave Annie Mills payments amounting to £32 0s 6d to support her daughter after she left the Soldiers' Daughters' Home.  Sadly Ada Rose died on 16 February 1885 aged seventeen and her mother was paid £4 for her funeral expenses.