According to his first biographer, Walter Thornbury, Turner had four illegitimate children, at least one of whom was a boy.  He provides no evidence for this, except for this piece of hearsay.
“‘I once,’ says a friend, ‘heard Mr Crabb Robinson (the friend of Wordsworth) casually mention a remark dropped by the late Miss Maria Denman, when the two were out for an excursion with Rogers (I think), and had put up at an inn in a village near London. ‘That’, said the lady, pointing to a youth who happened to pass, ‘is Turner's natural son.’” In his 1938 book about Turner’s hidden life, Bernard Falk says that there were, in fact, only three children, two girls and a boy named Hugh; all the result of Turner’s relationship with Sarah Danby. Turner acknowledged his daughters, Evelina and Georgiana, but never made any mention of a son, which, if he had had one, would have been unusual, given Turner’s general attitude towards women.

So, who was Hugh Danby?  Falk suggests that he was seen from time to time helping Turner’s father 'Old Dad' at the Queen Anne Street studio but, although some of Turner’s friends reported seeing a girl who resembled him, I can find no mention of a boy.

Falk also says that Hugh’s name appears in the list of people who contested Turner’s will in 1852 but not in the list of benefactors when the will was finally settled in 1856, because he had died in the interim.  However, I can find no record of a Hugh Danby who died between those years nor of a Hugh amongst the family of Sarah Danby’s husband, John. 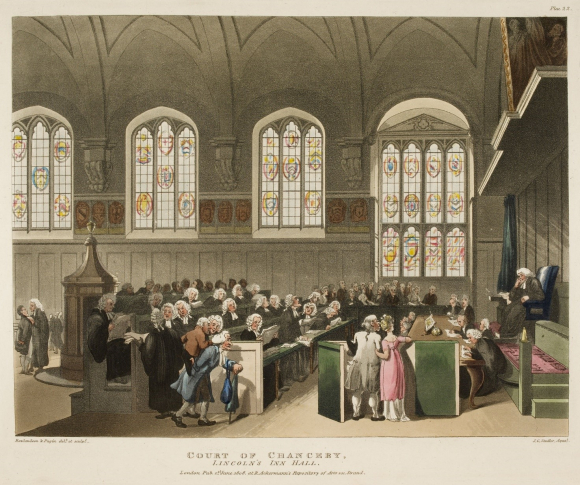 I think that the answer lies in the litigation documents for the original case in the Court of Chancery.  In the list of claimants, the only Danby I can find is Turner’s housekeeper, Hannah Danby, who is then mentioned in the final settlement as ‘since deceased’.  However, immediately preceding Hannah’s name is that of Turner’s executor, Hugh Andrew Johnston Munro.  I believe that someone transcribing the list, possibly for a newspaper report, elided the two names, thus creating Hugh Danby.  Again, some later reports just refer to H. Danby (since deceased), making it possible to assume, erroneously, that this refers to Hugh Danby. 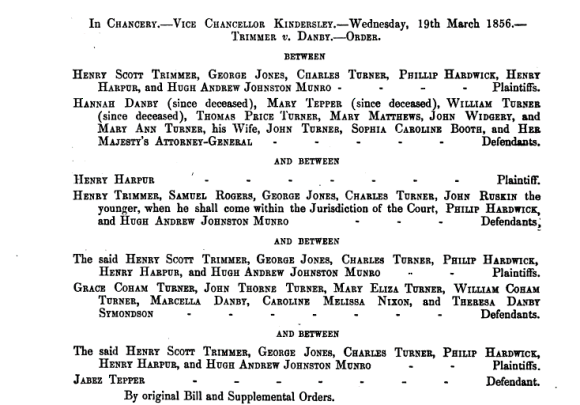 List of cases relating to the will of Mr. Turner, R.A. showing the names of the parties involved - Return to an order of the House of Lords 11 July 1861

It is my strong belief that Hugh Danby never existed.

Further reading:
Bernard Falk, Turner the Painter: His Hidden Life (London 1938).
Franny Moyle, The Extraordinary Life and Momentous Times of J.M.W.Turner (London, 2016).
Anthony Bailey, Standing In The Sun – a life of J.M.W.Turner (1997).
Walter Thornbury, The Life of J.M.W. Turner R.A. founded on letters and papers furnished by his friends and fellow Academicians (London, 1862).
Documents for the case in the Court of Chancery are held at The National Archives

Turner’s restored house in Twickenham is open to visitors.