By the summer of 1917, the British Mesopotamia Expeditionary Force had been in Mesopotamia for three years.  It had fought the armies of the Ottoman Empire and occupied territory stretching from Basra to Baghdad.  British officials had every reason to feel triumphant.  But then they met an opponent they could not defeat -– a French diplomat determined to be Consul of Baghdad.

A French Consulate for Baghdad
On 20 July 1917, the British authorities in occupied Baghdad were warned that a ‘Mons. Roux’ was en route to Mesopotamia, intending to establish a French Consulate.  The British authorities were bewildered.  They had not been informed about this new Consulate, and were worried that it might complicate efforts to impose imperial control in Mesopotamia. 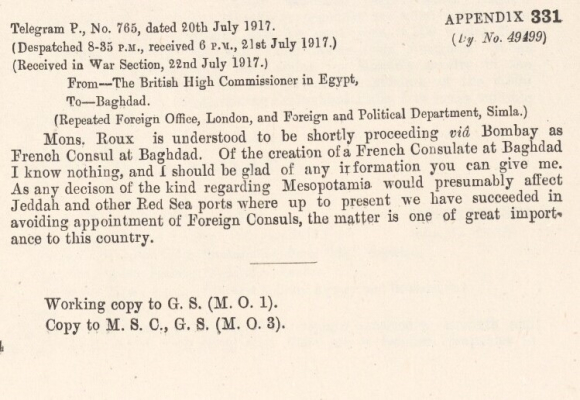 It was too late to prevent Roux reaching Bombay; the Foreign Office ordered that Roux be kept there while they decided on a response. 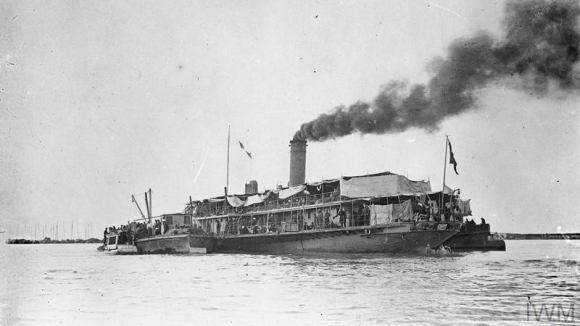 From Bombay to Basra
The British did not reckon with the determination of Monsieur Roux.  On 4 August, an embarrassed telegram from Bombay reached Baghdad. Roux had requested that the Government of Bombay let him leave for Basra.  The Government refused, stating that he would have to wait until they received permission from Basra.  Roux- clearly well-versed in the arts of diplomacy- ‘expressed extreme astonishment’ at this delay, and warned of ‘diplomatic complications’ if he was hindered.  Bombay allowed Roux to sail for Basra.  Shortly after his ship had left, a telegram belatedly arrived confirming that under no circumstances was the Frenchman to be allowed to leave.  Monsieur Roux was one step closer to Baghdad - and had left a gaggle of humiliated British administrators in his wake. 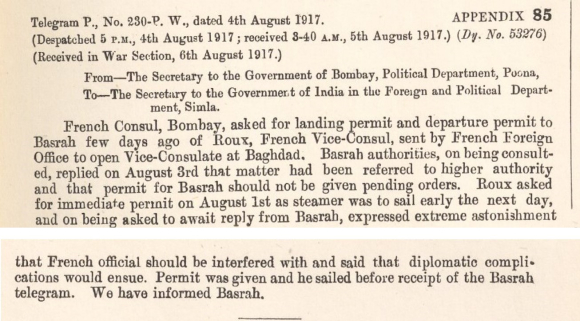 Bombay reports that Monsieur Roux has left for Basra, against the wishes of Basra’s British authorities in the occupied port city. Crown Copyright, IOR/L/MIL/17/5/3282, f. 128r.

Diplomatic Privileges
By 16 August, Roux had arrived in Basra and was causing more issues for the British.  Roux expected permission to use a locked diplomatic bag and a telegram cipher. However, his British hosts were reluctant to allow him to keep his communications secret.  On 28 September, the Chief of the Imperial General Staff telegrammed that the French Ambassador had complained about an ‘unfriendly and suspicious attitude towards Consul Roux, which may create bad impression in France’.

The ‘unfriendly and suspicious’ treatment of Roux drew the attention of the French Ambassador and prompted an official warning from the Imperial General Staff. Crown Copyright, IOR/L/MIL/17/5/3284, f. 487r.

The Chief ordered that this be investigated and that Roux, as ‘official agent of French Government’, be permitted to send cipher telegrams.  The threat of political consequences allowed the Frenchman to get his way again. 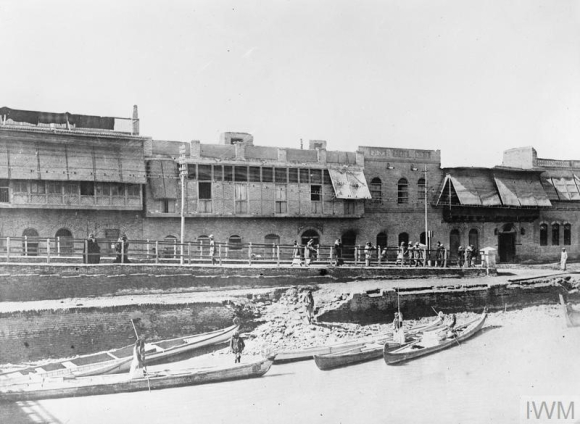 The Belgian Consulate at Basra, 1917. Roux is likely to have occupied similar quarters during his stay in the city. © IWM Q 25679

Consul Roux
Roux’s status remained unsettled for over a year. By October 1918, the British Political Resident in the Persian Gulf had changed his approach, suggesting that Roux should come to Baghdad ‘where he… can be more efficiently influenced and controlled’.  Roux himself was now more interested in events beyond Baghdad.  The oil-rich northern region of Mosul was at the time claimed by both the British and the French.  The commander of the Mesopotamia Expeditionary Force, Sir William Marshall, recalled in his memoirs that Roux spent November 1918 requesting permission to go to Mosul.  Marshall refused to allow the visit, suspecting that Roux planned to improve French influence in the region by handing out money.

The story of Monsieur Roux illustrates the smaller-scale realities of imperial rivalry.  The presence of a Consul allowed France to exert authority in a territory the British were determined to control.  Roux thus became a cause for concern, and relatively inconsequential incidents of interpersonal tension became part of a broader struggle for post-war imperial supremacy.