The Society of the Double Cross

In the archives of the Hakluyt Society at the British Library, I found a letter from 1963 sent by Philip Swann to the Honorary Secretary R A Skelton.  Swann had worked as a cartographer in Venezuela in the 1930s and was now living in retirement in New Zealand.

In Venezuela, Swann was introduced by a Scottish mining engineer to a family who produced a curious bundle of documents from a secret society known as La Socied de la Doble Cruz.  The papers referred to hordes of booty hidden across a multitude of exotic hideaways.  They mentioned legendary figures such as Montezuma and Henry Morgan and promised, should the strange hieroglyphics throughout the document be understood, potential lost fortunes might be recovered.  ‘The papers were found in the shape of a ball covered with (bitumen) fastened with two gold pins. There was also ten small bars of gold, one semi-precious stone, four minted coins very poorly done… four or five weights (presumably for weighing gold) a bundle of papers wrapped in a sort of wax…’ 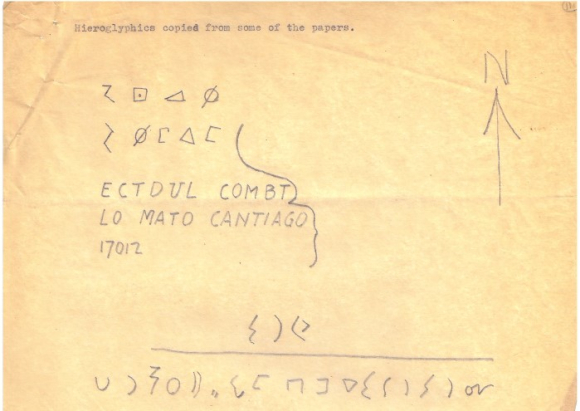 Swann said he had been sworn to absolute secrecy and, even 30 years later, felt obliged to ask that the matter be treated as confidential.  He asked the Hakluyt Society for advice on who might take up the research: ‘Even now, I still feel there is a glimmer of truth in it all, and it is worthy of investigation’.  He attached a list of sixteen things which should be explored, including the Booty of Mexico, activities on Lake Maracaibo, the Secrets of the Vulgate, and buried treasure on the Island of Cuanacoco.

Some of the events Swann writes about can be traced in other collection items at the British Library.  Morgan’s raid on Maracaibo was well documented in the 1678 publication Bucaniers of America by Alexandre Exquemelin, which is littered with enticing clues connected to the papers. 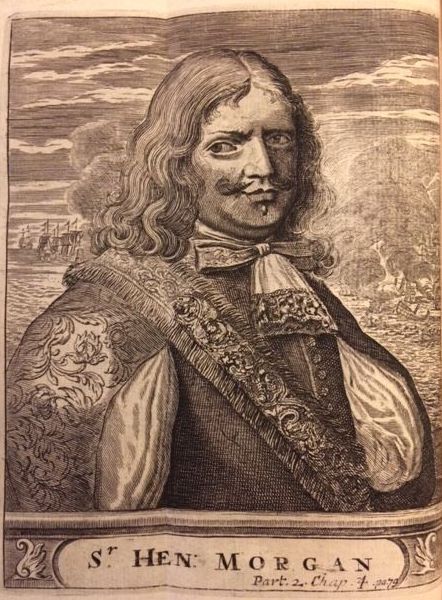 Captain Henry Morgan from A. O. Exquemelin, Bucaniers of America, or, A true account of the most remarkable assaults committed of late years upon the coasts of the West-Indies by the bucaniers of Jamaica and Tortuga, both English and French (London, 1684)

Elsewhere I discovered further tantalising leads.  Famed shipwreck salvager and treasure hunter Arthur McKee had a history of success discovering riches of bygone eras.  In his journals, McKee documented a curious excursion: ‘I was contacted by two men from Venezuela who stated they wished to discuss with me some strange markings found on some old documents. These documents were discovered at an old house in Venezuela which had been torn down’.

McKee described manuscripts inscribed on a skin-like material and leather, dated as early as 1557, which referred to ‘The organisation of the Doble Cruz’.  He spoke of the same strange hieroglyphs mentioned by Swann.  His translations mirrored those of Swann in a fashion beyond mere coincidence, with just enough translation discrepancies to suggest this wasn’t a copy of earlier research.  He appeared to be witnessing the same original documents.

In 1976 McKee organised an expedition.  The Forte La Tortuga was a supposed pirate fortress located 110 miles off the Venezuela coast.  McKee and two academics were transported to the deserted island by helicopter.  The expedition was doomed.  Injury and disorientation led to a very real fight for survival.  Rescued by the army ten days later, the quest was abandoned.

La Orden de la Doble Cruz still exists.  Based in Venezuela, a branch of the Knights Templar Illuminati Order fly the flag of the Double Cross, their legitimacy ‘evidenced by authentic ancient documents that rest in this city of Maracaibo, in our beloved country Venezuela’.

Further reading:
MSS EUR F594/5/1/3 Correspondence addressed to the Honorary Secretary of the Hakluyt Society, R.A. Skelton. ff 108-111 Letter from Philip Swann. 1963.
British Library Add MS 36330 Venezuela Papers. Vol. XVII. (ff. 345). 1653-1680. ff. 317, 332 Captain Henry Morgan: News of his design to surprise Cartagena: Madrid, 18 Mar. Spanish. 1676.
British Library Add MS 12428-12430 A Collection of Tracts relating to the Island of Jamaica, from 1503 to 1680. Journal kept by Col. William Beeston, from his first coming to Jamaica, 1655-1680.
British Library Sloane MS 2724 Charles Howard, 1st Earl of Carlisle: Collection of his papers and letters: 17th cent. f. 1 Lieutenant-General Sir Henry Morgan, Deputy-Governor and Commander in Chief of Jamaica: Proclamation conc. the Royal African Company: 1680/1
British Library RB.23.b.6178 Bucaniers of America: or, a true account of the most remarkable assaults committed of late years upon the coasts of the West-Indies, by the bucaniers of Jamaica and Tortuga, both English and French… London : printed for William Crooke, at the Green Dragon without Temple-bar. A. O Exquemelin, (Alexandre Olivier) 1684.

Posted by India Office Records at 09:00:00 in Americas , Journeys , Manuscripts