In August 1720, the East India Company’s Council in Bombay received a letter from their factors and merchants based in the city of Mocha.  They had expected this letter for some time.  It was the practice for the factory’s staff to report on their activities regularly as Mocha was the entrepôt for the coffee markets of Yemen, in which the Company had invested heavily.  The letter contained the expected business news of the factory and the shifting political situation in Yemen, which had been growing more and more fraught in the preceding few years.  Despite all this, the Company’s investment in coffee was yielding good results and the Council could feel comfortable in the knowledge that their men in Mocha were managing their affairs well. 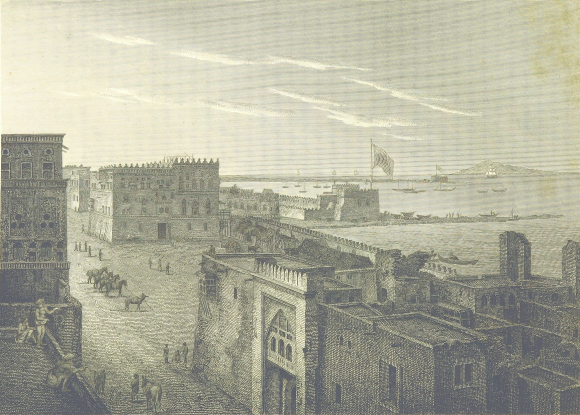 View from the factory at Mocha by Henry Salt from Voyages and Travels to India, Ceylon, the Red Sea, Abyssinia, and Egypt (London, 1809) British Library Digital Store 10058.l.13 BL flickr

With this letter came a list of the factory’s expenses, the salaries of guards and domestic servants, the pay given to the Company’s four merchants, and the costs of running the factory itself.  One of the largest of these was the expenses incurred in maintaining the factory’s ‘Table’ which amounted per month to nearly 300 Spanish dollars (the famous piece of eight).  This was a considerable sum to feed the factory’s 22 residents, including the Eurasian ‘topas’ and ‘peon’ guards.  Access to the table was also open to visiting English merchants and ships’ officers when they were present in the port, making it a space for social interactions in addition to eating and drinking.

The records kept by the Mocha factors tell us a great deal about what the table would have been laden with.  For the most part it seems like fairly standard fare for an early modern English kitchen: greens, salt, beef, onions, limes, beef, mutton and fresh fish appear regularly, as do fowls, chickens, pigeons and eggs.  To this menu was added some local flavours, with limes, ‘spice’ and ‘temper’.  This latter is particularly interesting, as a temper, Tadka or Tarka, is a distinctive feature of South Asian cuisine, where spices are mixed with oil or ghee then strained, leaving a flavoured medium.  So, while some of the factory’s inhabitants may have been happy to stick to familiar flavours, others were regularly sampling local ones.  Additionally, the factory regularly received shipments of Persian wine, along with beer produced on the Cape.  Wine was so important to the factory that the letter received from Mocha protests that it had been two years since they had received any from the Company.  Instead, they had been forced to buy their own, rather than face doing without it.

The contents and habits around the Company’s table can tell historians a lot about the merchants’ attitudes to sociability.  The table was a forum for maintaining relationships with the factory’s staff, while also inviting travellers and visitors to make new connections.  Company pay may have been poor, but service in Mocha, as in other factories, came with significant benefits.  Studying the details of conditions in the factories beyond India can provide a great deal of texture and depth to our understanding of the lived experience of Company service, while giving an impression of the daily routines of the merchants themselves.  The factory was a place of commerce, but also a domestic space.

This blog post is  part of a collaborative series with Medieval and Early Modern Orients (MEMOs).  On the last Monday of every month, both Untold Lives and MEMOs' own blog will feature a post written by a member of the MEMOs team, showcasing their research in the British Library collections.  Follow the conversation on Twitter with the hashtag #BLMEMOS.

Posted by India Office Records at 10:47 AM