Letters from the Garrod children to their father

Among the private papers collections donated to the British Library, the Garrod Family Papers present a very special archive ranging from 1867 to 1990.  They include correspondence, files, maps, printed papers and photographs of William Francis Garrod (1893-1964) and Isobel Agnes Garrod (formerly Carruthers) (1898-1976) relating to their family life in India, Garrod's career in the Indian Ecclesiastical Establishment 1930-1946, and his service in World Wars One and Two.

A great number of letters were exchanged when William and Isobel got engaged, then married and had four children.  Among lockets of hair, newspaper cuttings and postcards, one can see them overcoming the challenges of family life, household and financial issues while keeping close family ties despite the distance between them. 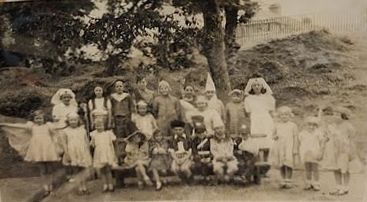 Children in costumes as the cast of a play - India Office Private Papers Mss Eur F730.

As William spent long periods of time away from home so the children grew up observing their mother write to their father and became interested in writing to him as well.  They took up this habit at a very young age, before even being actually able to write. 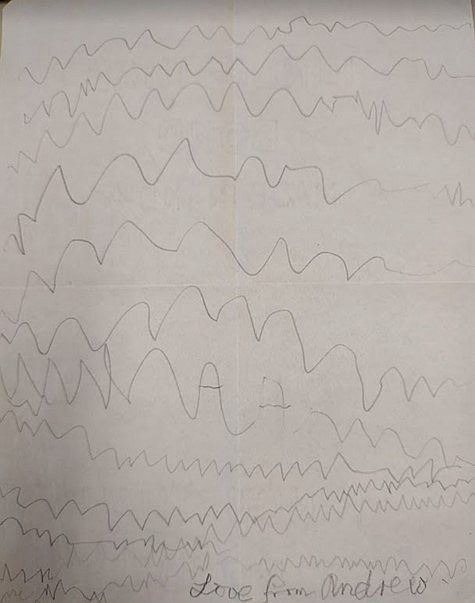 The children report frequent visits to the cinema, social and academic updates from school, sickness and all the social events their father is missing such as Christmas and birthdays. 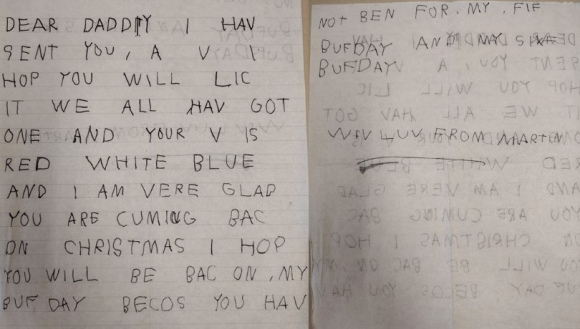 Letter from Martin hoping that his father will be back on his birthday because he had not been for his fifth and sixth birthdays - India Office Private Papers Mss Eur F730. 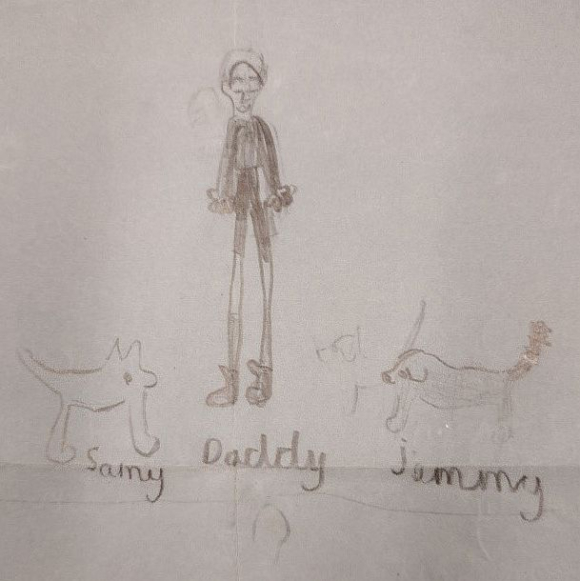 They do not often mention the war besides hoping their father is well and can come home soon. 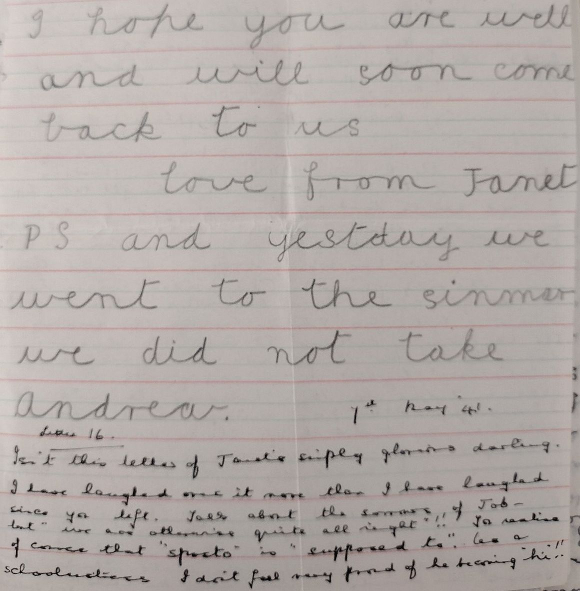 Letter from Janet - ‘we are quite alright and I hope you are well and will soon come back to us’ - India Office Private Papers Mss Eur F730. 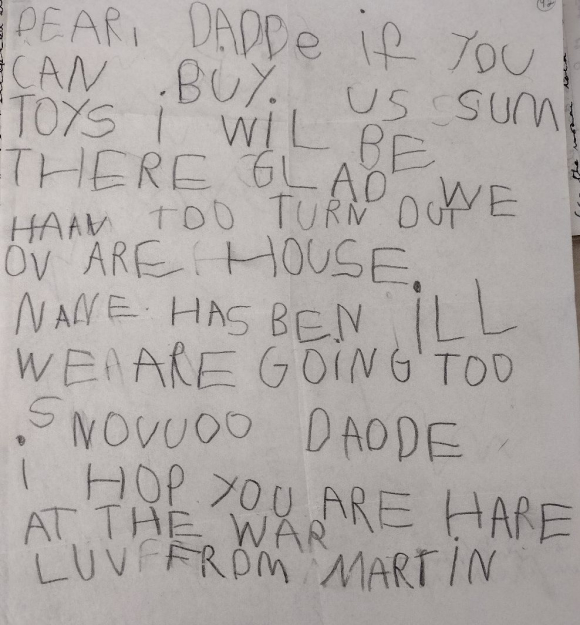 However, they do show in drawings how they imagine it to be. 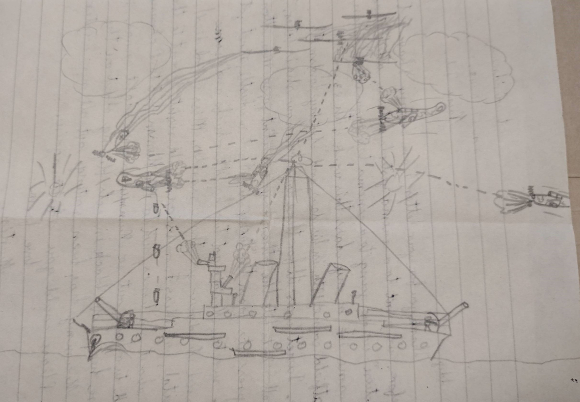 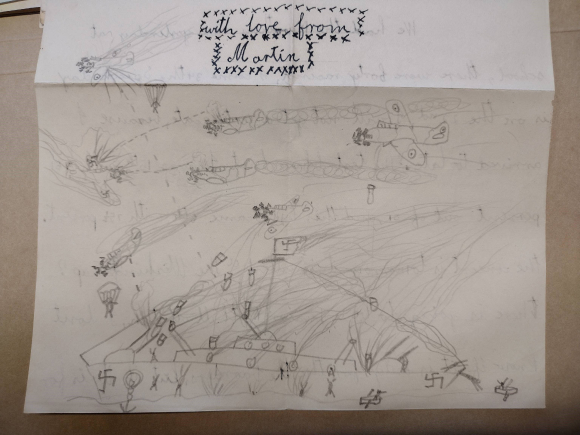 They also depict their image they have of their father’s role in it and the dangers he faces being away from home. 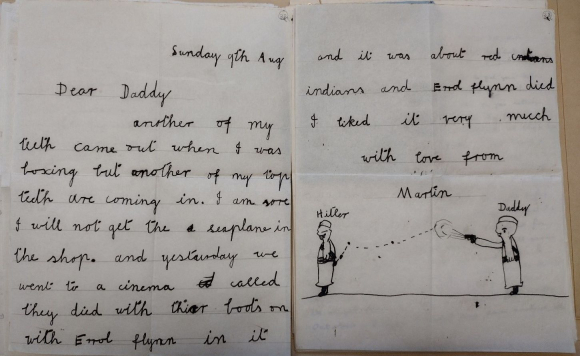 Luckily, those drawings are also often accompanied by captions sometimes composed by the children themselves, sometimes by thoughtful Isobel to make sure the drawings would be understood on the other end. 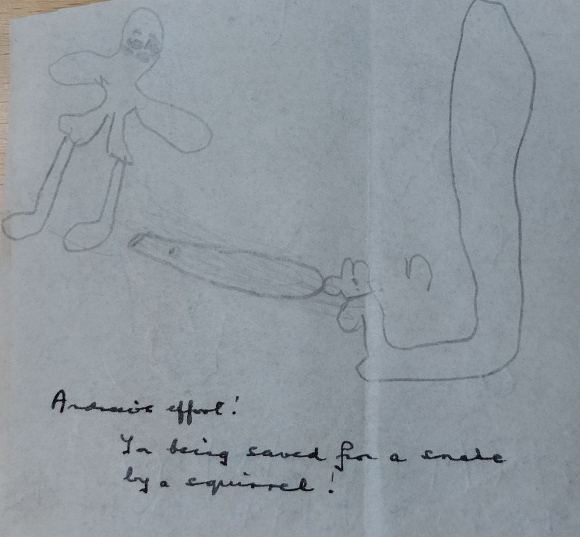 Daddy being saved from a snake by a squirrel  - India Office Private Papers Mss Eur F730.

Isobel is also very careful in numbering the letters in case they get lost, delayed or get to William all at once. In some of the letters one can imagine how frustrating it must have been to not have control over that and to be aware there was an inevitable delay between sending a message and it reaching William.

Letter 53 from Isobel – ‘I wonder when I am going to hear from you again and where you are’- India Office Private Papers Mss Eur F730.

Not only does the collection give a fascinating glimpse into the life of a British family living and working in India at the end of the British Raj, it also provides the very rare perspective of children.