Sensationalism on steroids: The London Monster

Between 1788 and 1790, a sensational news story hit the headlines: a monster was stalking the streets of London.  The mysterious culprit picked women at random and stabbed them in the thigh or buttocks with a plethora of sharp objects, from knives to pins.  Sometimes he invited his victim to smell a small bunch of flowers and stabbed her with a weapon hidden in the blooms.  He always escaped before help arrived.  The press soon gave him the notorious nickname ‘The Monster’. 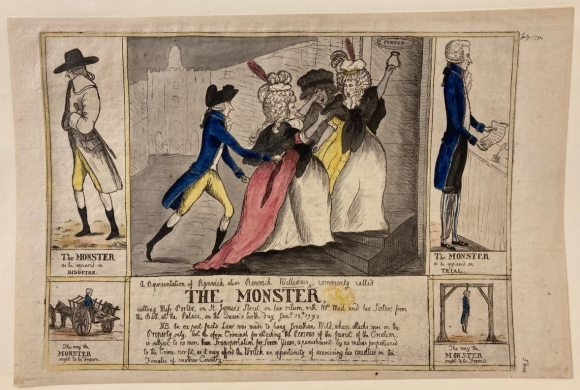 The attacks mounted up but the authorities had no leads.  The press reports grew more and more hysterical and, soon, it became a full-on public scare.

Sarah Sophia Banks, sister of botanist Sir Joseph Banks, was as swept up in the Monster hysteria as anyone.  She hoarded newspaper cuttings, prints, posters and notices about the attacks and stuck them in one of her many scrapbooks.

The London press refused to let the case drop, covering each sensational incident in gory detail.  They dropped heavy hints that the culprit must be an outsider – no doubt a foreigner – whipping up outrage and hostility despite having no evidence or proof of any kind.  Sensationalism of this kind has a tendency to drive sales.

The panic-stricken public formed vigilante groups to roam the streets of London and hunt for the Monster.  Rich businessmen and merchants promised hefty records for his capture.  They pasted up sensational posters across London alerting the public that a ‘bloodthirsty’, ‘dangerous’ monster was on the prowl and attacking young women.  One poster even suggested there might be more than one suspect: 'there is great reason to fear that more than one of those wretches infest the streets'.

The mass hysteria got so crazy that satirical posters sprung up across London in response.  Sarah Sophia Banks collected one with the over-the-top claim that the Monster 'attempted to cut up his own children' and was back in London to 'devour all editors of newspapers, book-sellers, engravers and publishers of satiric prints'.

Proto-police force The Bow Street Runners soon joined in the poster craze in their desperation to make an arrest.  Printed in red for maximum impact, one such poster encouraged servants 'to take notice if any man has staid at home without apparent cause, within these few days, during day light.  All washerwomen and servants should take notice of any blood on a man’s handkerchief'. 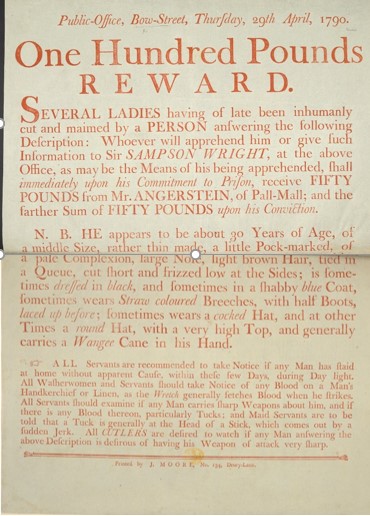 The attacks continued for months before the Bow Street Runners finally made an arrest in 1790.

Their suspect was Rhynick Williams, a young unemployed man from Wales.  The mob threatened to lynch him when the Bow Street Runners brought him in for questioning.  Williams was eventually charged – although the judges struggled to pinpoint (excuse the pun) what exactly he should be charged with – and sentenced to six years in Newgate Prison.

The attacks stopped after this.  Coincidence?  Who knows.

Historians today question whether Rhynick Williams really was the Monster.  Descriptions of the culprit varied wildly and Williams had an alibi for at least one of the attacks.  The case was further complicated by some reports of attacks being faked, and it was suggested at the time that there might be more than one person carrying out the attacks.

Some historians go even further: was there ever a Monster at all?  Or was the entire scare a case of mass hysteria and sensationalism on steroids?  We’ll probably never know.

See these original posters about the London Monster in our Breaking the News exhibition, open until 21 August 2022. Explore 500 years of the news in Britain and discover more era-defining headlines and news stories.