The Cost of Living Crisis, Part 3: The Price of Whale Oil

For hundreds of years the British hunted whales for their oil, blubber and bone.  Whales provided lubricant for machinery during the industrial revolution, fuel for lamps, and their baleen could be used as parts for everyday items such as corsets and umbrellas.  Traditionally the British whaling grounds lay to the north where Northern Right whales and Bowhead whale were hunted, but the prized sperm whale oil called ‘spermaceti’ would see the expansion of the trade into the southern seas.

Ink drawing of a sperm whale from ‘A Voyage for Whaling and Discovery’ by James Colnett, f.141, Add MS 30369

The expansion of British whaling grounds is intimately tied up with the history of Empire and oil prices were often impacted by the gains and losses of colonies.  The eruption of the American Revolutionary War had a massive effect on the British whale oil trade, depleting output and raising prices.  Much of the whale oil trade had come out of the British colonies in North America, but with the advent of the war this was almost completely shut down.  At the end of the war the British wanted to create more self-sufficiency in terms of oil supply.  The American trade bounced back and the British wanted to compete in a buoyant market, so Britain imposed import duties on US oil and created the Southern Fisheries trade, focusing British whaling on the mid and south Atlantic, the Pacific and Indian Oceans. 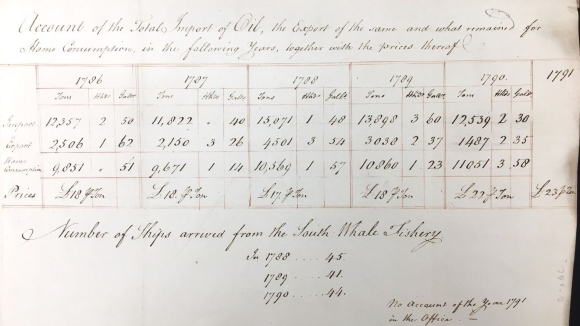 Accounts of Imports and Exports of Whale Oil showing a heavy trade deficit at the beginning of the Southern Fisheries Trade, Add MS 38352, f.123. 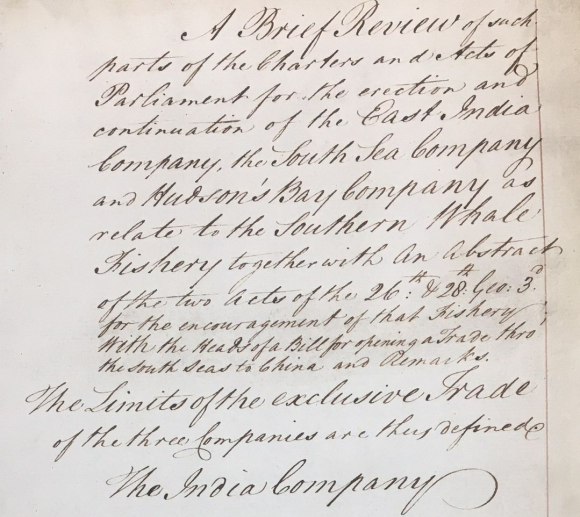 British Guiana, Madras, South Africa and Australia in the early 1800s further contributed to the whale oil trade.  They introduced landing points for ships working along the tropical latitudes pursuing the more lucrative sperm whale with its more valuable oil.  British whaling became a global enterprise and those staffing whaling ships were multinational and multi-ethnic.  Crews encompassed employed and indentured sailors, as well as enslaved and free African men.  Given the arduousness of the work, employers could not afford to refuse whalers whatever their background, therefore whaling ships were a popular destination from those escaping or freed from slavery during the 18th century.

However the War of 1812 interrupted the trade and temporarily sent the price of whale oil upwards again.  It was not until the end of the war that whaling returned without obstacles.  Production sky-rocketed to the point of over-supply, causing a glut and a fall in its value in the late 1830s.  The home-grown British whaling trade started to decline as more and more colonial oil was bought in from Australia and the government decided against further propping up the London-based trade.

A combination of free-trade policy with the Americans and the colonies decreased investors' interest in British-based whaling, and, as well as this, whale stocks were failing after hundreds of years of hunting.  The British began to import the majority of oil and so were liable to market shocks in America, such as that caused by the American Civil War.

Extract from letter from Charles Enderby to Robert Peel lamenting the decline of the Southern Whale Fisheries and the dominance of the American industry, 1846, Add MS 40458, f.307.

British whaling would return in the 20th century and a global, mass-commercialised whaling would cause far more devastation to whale stocks than the London and Nantucket-based industries of previous centuries.

Ink Drawing of a Sperm Whale from ‘A Voyage for Whaling and Discovery’ by James Colnett, f.142, Add MS 30369

Posted by India Office Records at 09:00:00 in Commerce , Manuscripts , Science and environment , War