In the autumn of 1860 the staff of the India Office moved from East India House in Leadenhall Street in the City of London to temporary accommodation in Victoria Street whilst new premises in Whitehall were being purpose-built.  The India Office was the department of state which had taken over from the East India Company in 1858.  East India House was sold in June 1861 and demolished soon afterwards. 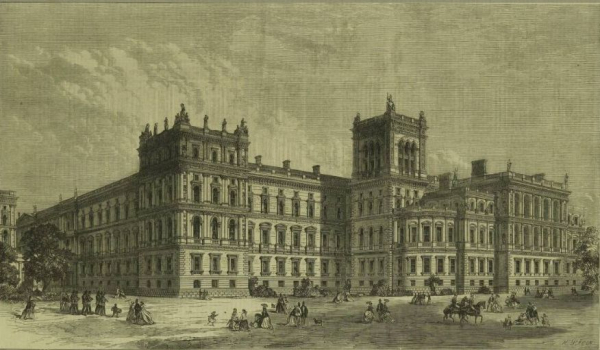 In the second half of 1867, the move from Victoria Street to Whitehall gradually took place.  Decisions were made about the arrangements for maintaining and staffing the new India Office building, which was described by the Homeward Mail as ‘a grand new palace of administration’.

The contract for cleaning the windows, skylights and bookcases was awarded in February 1868 to Alfred Henry of Vauxhall Bridge Road who submitted a tender for £250 per annum.  This was considered a very low rate given the vast quantity of glass to be cleaned.  Henry had previously been employed for plumber’s work at Victoria Street and he had given satisfaction.

Architect and surveyor Matthew Digby Wyatt, wrote a memorandum stating that the numbers sanctioned in 1861 for male indoor and outdoor messengers, and for female servants were not sufficient in Whitehall.  Nineteen additional men were needed to service the messengers’ boxes situated at fixed points throughout the building, using bells and speaking tubes to communicate.  The ‘great extent’ of the new premises meant that nine extra housemaids would be required to keep clean the rooms, passages, staircases, and furniture.  Wyatt also recommended the appointment of an assistant to the housekeeper.  Eight women and the housekeeper should live in the India Office.

The duties of the female servants were:
• Cleaning and dusting thoroughly each room every day.
• Keeping all the linen in order.
• Scrubbing every set of stairs once a week.
• Lighting all fires.
• Keeping the stoves, fenders, coal scuttles and fire irons clean.
• Scrubbing all the uncarpeted wood flooring once a week, and wiping over the Kamptulicon floor covering with a wet cloth and drying it immediately.
This list was expected to occupy the women fully, but Wyatt said that there was plenty of ‘easy’ dusting and cleaning if they had spare time. 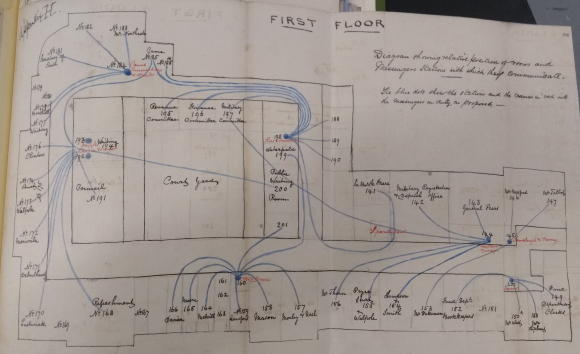 A list of all the rooms in the new India Office was drawn up in December 1867 with accompanying plans – offices, book rooms, strong rooms, kitchens, luncheon room, refreshment room, stores, closets, washing closets, bedrooms, lumber rooms, coal cellars.   These showed who occupied each room and the messenger post with which the room communicated.  Staff spoke through metal speaking tubes fitted with bone whistles and mouthpieces. 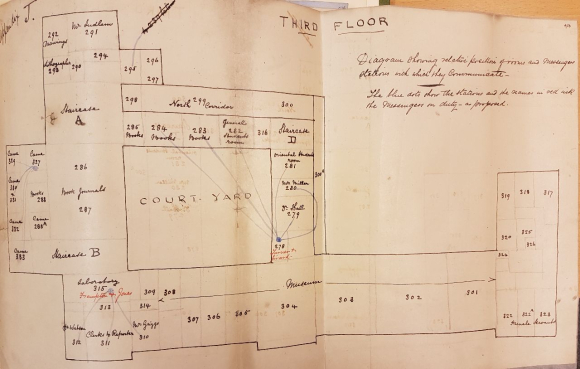 The female servants’ bedrooms were on the third floor.  Mrs Sally Moore, the housekeeper who supervised them, had rooms in the basement near the women’s kitchen and workroom.

At the time of the 1871 census, Sally Moore and eighteen others were living at the India Office.  As well as female domestic servants, there were four resident male employees with their wives and families: Head Office Keeper William Badrick, Office Keeper Joseph John Hope, Office Porter Henry Vincent, and Private Secretary Horace George Walpole.