Luncheons at the India Office

In May 1867 newspaper advertisements invited tenders for the supply of luncheons at the new India Office in Whitehall.

The tender of Frederick Eneas Nicholes was accepted in July.  Nicholes signed an agreement on these terms:
• The purveyor would be provided with a kitchen, coals, gas, and furniture, but not with plate, linen, glass, cutlery, earthenware, or cooking utensils.
• A room would be set apart for ‘the exclusive use of gentlemen on the establishment of the India Office’ where they could be supplied with refreshments instead of in their own rooms.
• The purveyor would have use of the kitchen and luncheon room between the hours of 9am and 5pm, checking that the fires and gas were put out before handing the keys to the housekeeper.
• A tariff of prices was to be hung in the luncheon room.
• Items supplied were to be of the best quality, well cooked, and served with 'civility, cleanliness and punctuality'.
• No smoking was permitted in the luncheon room and kitchen.
• Everything was to be paid for at the time of delivery.  No charge was to be made for waiters, but an additional penny could be charged for the use of the tray, cloth etc where luncheons were supplied in officials’ own rooms.
• The purveyor was to supply a luncheon for every meeting of the Council of India at a charge of 4s a head, exclusive of wine, beer etc.
This contract could be terminated by either side at two months’ notice. 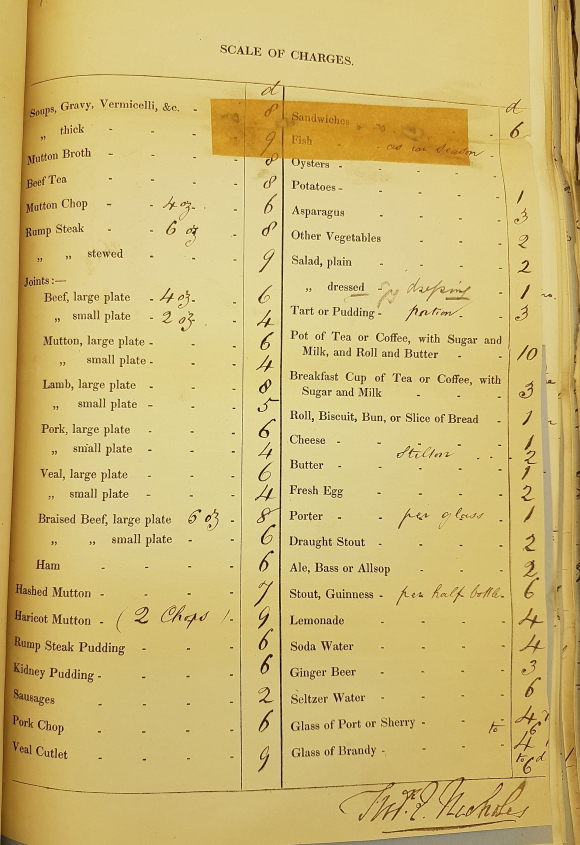 Nicholes started work as purveyor on 1 September 1867, but  unfortunately the refreshment rooms had not been finished in time.  In October Nicholes submitted an account of his losses totalling £104 – provisions spoiled and having to be destroyed by the lack of a larder; lack of income because the coffee room was not completed; wages for extra staff; breakages and loss from the non-completion of the pantry; extra washing.  The India Office decided that his claim was fair and granted him £100 in compensation.

However Nicholes said he was unable to continue as purveyor on that allowance.  The India Office would not sanction an increase and in September 1868 gave notice that Nicholes’s engagement as purveyor would end on 25 March 1869.  Nicholes appealed for the decision to be reversed, but to no avail.  He was given a testimonial that his services had been very satisfactory. 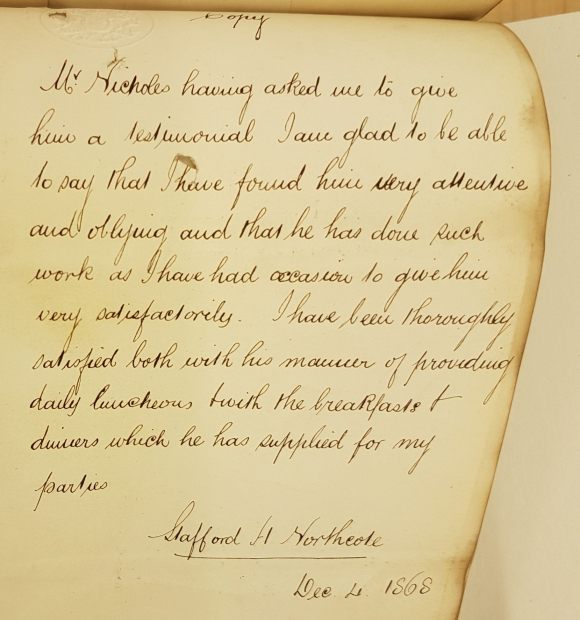 Nicholes went on to be purveyor in the refreshment rooms at the Houses of Parliament. 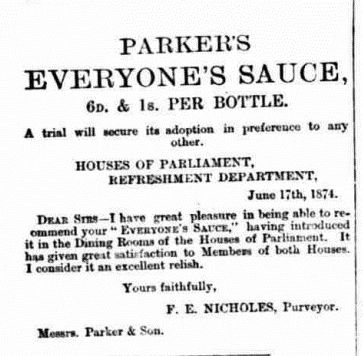