Sanitation at the Fort William Garrison

The Garrison at Fort William was not a particularly healthy place in 1860.  The proportion of its inhabitants sick in hospital was the highest for any station in Bengal, save for Dum Dum.  ‘Offensive smells’ were rife, and living quarters below rampart level were particularly noxious in the hot and rainy seasons due to poor air circulation.  A Sanitation Committee, which included the Deputy Inspector General of the Hospital, the Garrison Surgeon, and the Garrison Surveyor, had been looking at the issues for a number of years.  Fort William suffered from a number of structural problems due in part to an insufficient fall in elevation for drainage.  The privies leaked, the drains mainly opened into the ‘cunette’ or wet ditch, which had a propensity to silt up (but not with silt), and the Fort’s water supply was insufficient. 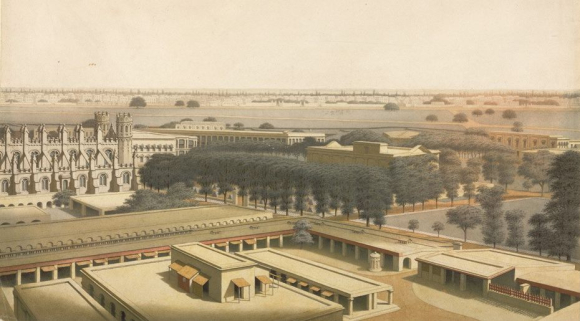 The Committee also viewed the behaviour of the men themselves as a problem – there were too many ways in which alcohol could be brought into the Fort, and too many ways in which the men could sneak out to the local grog shops at Hastings and Kidderpore Bridges.  The Medical Officers were of the opinion ‘… that almost every fatal case of cholera has been immediately traced to intemperance…’. 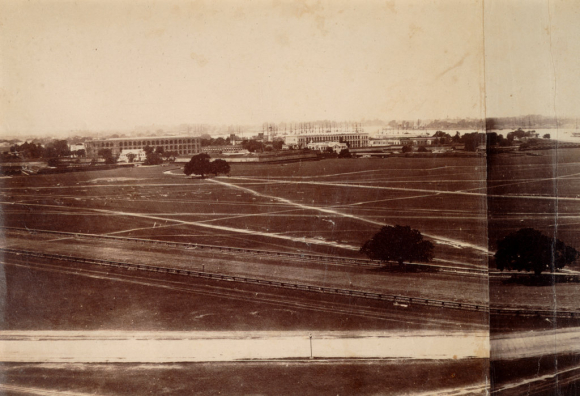 Number one on the suggested list of improvements were the privies.  A new standard plan for privies was to be introduced in the various barracks, the hospital, and places in the Garrison such as the arsenal.  In addition,  a new type of urinal was to be installed; unfortunately, a fully enamelled version could not be sourced in India, and would have to requisitioned from England.  In the meantime, a patented portable urinal could be purchased from Mr Lazarus of Cossitollah.  ‘The upper circular receiving basin is enamelled ware and empties into a strong iron Cylinder below.  Rings at the sides enable the whole to be carried away by means of a pole passing through them.  The main objection to this urinal is that the lower Cylinder – not being enamelled, rapidly corrodes.  It is however well adapted to meet the present requirements, and accordingly 100 are now being supplied for the use of the Barrack floors. Privies etc. in the Fort’. 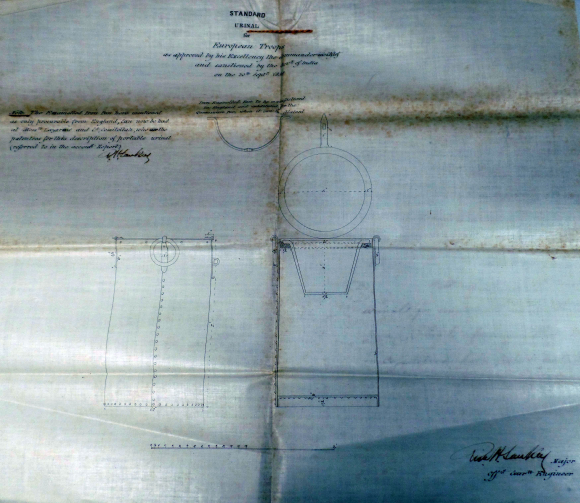 Additionally, gutter-shaped glazed tiles from Doulton and Co. of London were to be installed in the privies and urinals ‘generally wherever the offensive matter is likely to come into contact with the ground’ as they were ‘guaranteed to stand the action of the most powerful acids’.  The Committee were also keen to increase the supply of disinfectants, suggesting liberal use of both charcoal and chloride of lime.

As for excessive drinking of liquor within and without the Garrison, a carrot and stick approach was taken.  There was to be greater enforcement of the Regulations of 1850, which limited each man to two drams of spirits per day, and the number of regimental canteens supplying alcohol was to be reduced.  Gate searches were to be increased.  To prevent soldiers sneaking out, more sentries were to be posted and repairs made to the ramparts to prevent climbing; in addition glass was to be set in mortar ‘at the top of the escarp’.  There was to be investment in ‘works connected with the amusement and instruction of the soldiers in the Garrison’.  These included the provision of skittle alleys, a gymnasium, a theatre, and a Garrison library.