The British Library and London Metropolitan Archives both hold collections of papers for James Monro who served in the East India Company’s maritime service in the second half of the 18th century. The documents give a fascinating insight into Monro's professional and personal life, and the use of private trade to accumulate a fortune which would allow him to quit the sea. 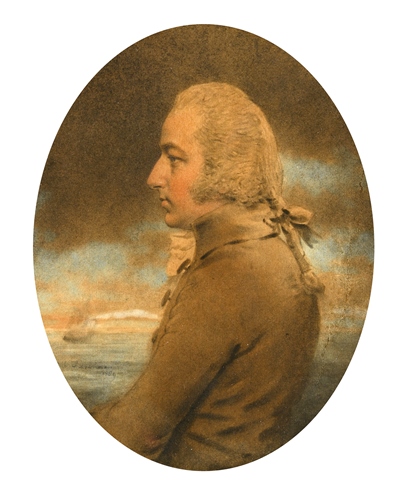 James Monro was the son of Dr John Monro, physician to Bethlehem Hospital.  He began his life at sea in 1766 at the age of just ten years, sailing to Madras and China as servant to Captain William Smith in the East Indiaman Houghton. Captain Smith was his mother’s brother.  Another uncle, Culling Smith, was one of the owners of the Houghton.  Monro made three more voyages with William Smith in the Houghton, as midshipman in 1769-1771; as 5th mate in 1773-1774; and as 2nd mate in 1777-1778.  Monro also sailed as a seaman to the West Indies and Calais, and as mate in two other East Indiamen, the Osterley to Benkulen, and the York to China.

In 1782 James Monro succeeded his uncle William Smith as captain of the Houghton, making four voyages to China and India before resigning and passing the command to Robert Hudson in 1792.  Captains were appointed by the ship owners and approved by the East India Company, and Monro’s correspondence sheds light on this system.

In April 1792, William Smith wrote to his nephew, addressing him as ‘Dear Jim’.  Smith understood that Monro had sold the command of the Houghton for 8,000 guineas, having paid him £4,000 for it.  Although Monro had not promised  him anything, Smith thought he should receive half the profit.  Smith claimed that he could have sold his command at a far higher price, perhaps as much as £7,000, but he had his nephew’s interest too much at heart to consider such offers.  He regretted the ‘disagreeable necessity’ of speaking his mind.

James Monro’s reply began ‘My dear Sir’.  He felt that he was being put in a very unpleasant position, and put forward his side as he would to someone not related.

Monro was away on board the York when it was decided that he should succeed as commander of the new Houghton which was being built to replace Smith’s ship.  On his return to England he was told to pay Smith £4,000. He had no idea that any future demand would be made on him until a chance conversation with his uncle some time later.

Both the East India Company and the owners had been trying to lessen the price given for ships, or to prevent totally the sale of commands.  If they had succeeded, would Smith have refunded part of his £4,000?  Smith had not paid for his own command but had received interest on Monro’s £4,000 for ten years.

Monro had always thought to offer his uncle £1,000 when he sold the command.  He would cheerfully give him 1,000 guineas and nothing more need be said.

Smith replied to ‘My dear James’.  He wished his nephew had told him sooner about the intention to offer £1,000.  This sum satisfied him and he asked Monro to pay it to his banker when convenient.  He hoped this business would make no difference or coolness between them, and closed by sending his best love to Mrs James and the young ones.