Living on a reduced income in 1868

In April 1868 Charlotte Francis Laing sent a petition to the India Office for financial assistance.  She had been reduced from affluence to ‘extreme penury’ when the failure of the Bank of Bombay took away her income from a holding of 180 shares. 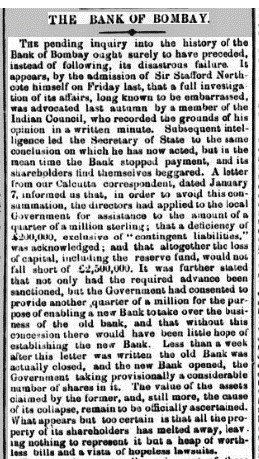 Mrs Laing stated that she was the daughter of civil servant William James Turquand, and the widow of surgeon William Christie Laing.  Both men had served the East India Company in Bengal.  Her late husband had subscribed to the Bengal Military Orphan Society for 23 years, but had ceased pay into the fund after his retirement in 1848, believing that his private means were ample for the future provision of his family.  He had died in November 1861.  Mrs Laing asked for her seven children aged between nineteen and ten to be taken onto the Orphan Society books because she was now left with just a small widow’s pension to support them.

Hoping that the suspension of dividend payments was only temporary, it was some time before Mrs Laing had realised the need to reduce her way of living to a ‘pauper scale’.  She had now moved into a 'mean house' in a poor quarter of Crediton in Devon at a rent of £17 per annum.  Although ’always hitherto accustomed to all the refinements of an English gentlewoman’s life’, she now could not afford to keep servants, except a little girl, and was reduced to performing with her own hands ‘the chief drudgery and menial service of my house’.  The family could only afford to eat animal food on alternate days and Mrs Laing had gradually sold everything of value she possessed, even clothing.  She had had to remove her daughters from school and deprive them of education at the most important period of their lives. 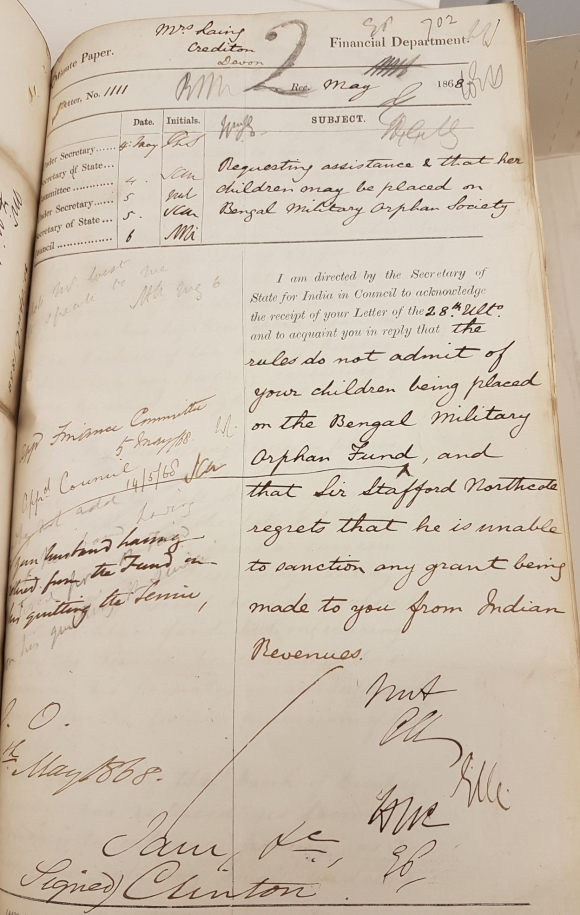 An official noted on the petition that Mrs Laing received an annual pension of £225 from the Bengal Military Fund.  A reply was sent saying that the rules did not permit the children to be admitted to the Orphan Fund, and the Secretary of State regretted that he was unable to sanction any grant to Mrs Laing from the Indian revenues. Ten years earlier, the directors of the East India Company might have responded to such a petition by making a donation as a gesture of goodwill, but in 1868 Mrs Laing encountered the new department of state operating within strict rules of governance.

Three years later, at the time of the 1871 census, Mrs Laing was living at Cowick Barton in Devon with four of her children: William Alexander Gordon, 21, who became a surgeon; Gordon Hammick, 18; Ellen Sydney, 16, and Kate Mary Christie, 12.  Charlotte Maria, 20, was working as a governess in Camberwell, Surrey.  Cordelia Margaret Frances, 10, was a scholar at Wilton House in Hackney, East London.  She and Kate also became teachers. I believe that Edward Turquand Gordon, 14, was serving an apprenticeship in the Merchant Navy.  In 1878 he enlisted as a gunner in the Royal Artillery and was stationed in India for ten years.