Robert Hubert and the Great Fire of London

Shortly after midnight on Sunday 2nd September 1666, a fire broke out at a bakery in Pudding Lane. In the days that followed, the fire proceeded to destroy around 80 percent of the old City of London. 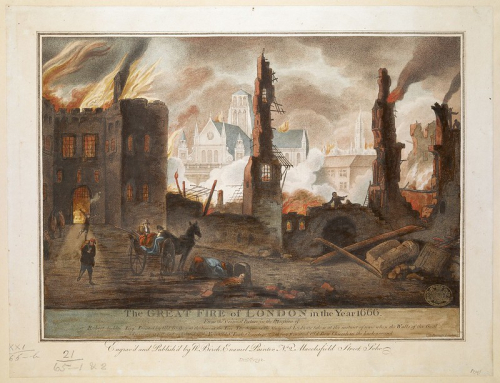 Robert Hubert (c. 1640-1666), the son of a Rouen watchmaker, later confessed to starting the fire. He was indicted at the Middlesex sessions on 16 September 1666 and imprisoned at the White Lion prison in Southwark. Just over a month later, he would be executed for a crime that he did not commit.

Alongside his alleged accomplice, Stephen Peidloe, Hubert claimed to have created a crude fire grenade by placing gunpowder, brimstone and other flammable material onto the end of a pole and pushing it through the open window of the bakery on Pudding Lane. The only supporting evidence for Hubert's confession lay in his ability to go to the site of the bakery and to describe its appearance. His claim that he pushed a fireball through a window was entirely falsified, as even the owner of the bakery maintained that it had no windows. Later, the testimony of the captain of the ship on which Hubert sailed from Sweden would further prove his innocence, by confirming that Hubert had not arrived in England until two days after the fire started. 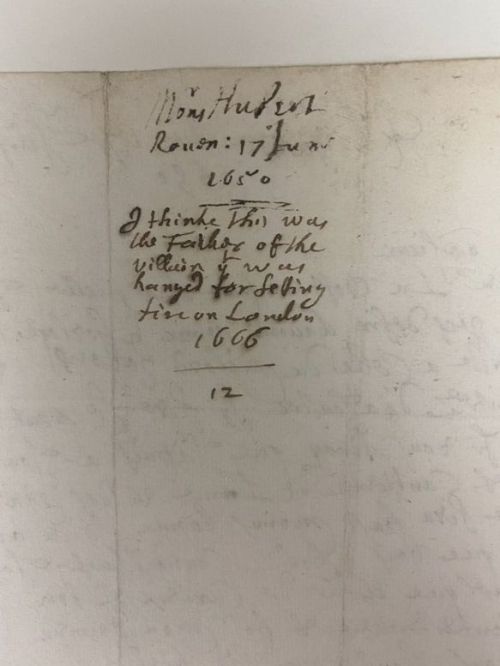 Yet in the Evelyn papers held at the British Library, we see that contemporary writer, diarist and horticulturalist John Evelyn possibly still held Hubert responsible for the conflagration. Evelyn made copious annotations of his letters in later life, and on the reverse of a letter written to him by one Estienne Hubert, written in 1650, Evelyn noted

'I thinke this was the Father of the villain [that] was hanged for setting fire on London 1666'.

Evelyn was not  alone in his belief that Hubert had deliberately and maliciously started the fire. As a foreigner, Hubert became an easy target for those seeking to explain away the many misfortunes that befell the city in the mid-17th century. Despite the fact that both he and his family were known to be Protestant, Hubert can be seen depicted on the frontispiece to Pyrotechnica Loyalana, Ignatian Fire-Works (1667), an anonymous work suggested that the Fire had been deliberately started by Catholic arsonists, acting on the instructions of the Pope. 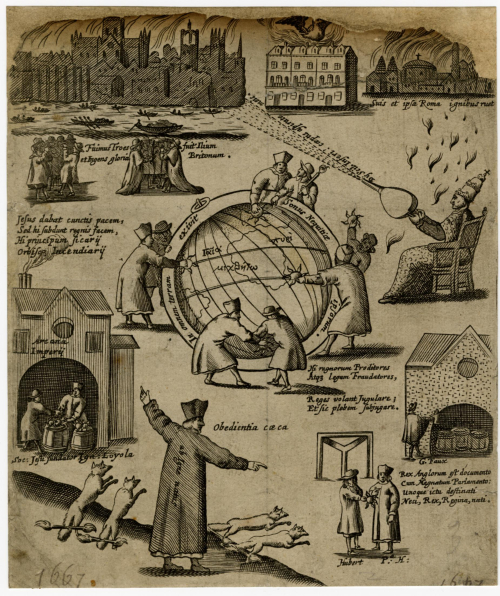 In the etching above, Hubert exchanges a hand grenade with a Jesuit priest labelled 'Pa.H'. It has been suggested that this may refer to Harcourt, a notable Jesuit priest who would later be arrested and committed to Newgate Prison on the charge of complicity in the fictitious Titus Oates plot to kill the king. A gallows is depicted behind the pair, indicative of Hubert's fate.

Although Hubert's confession was fraught with contradictions and the authorities largely accepted that the fire was an accident, Hubert had confessed to the crime and was therefore hanged at Tyburn on 27 October 1666. Hubert's motives for confessing remain as mysterious today as they were to the authorities present at his trial, although there is some evidence to suggest that the young man was suffering from mental illness. Several witnesses remarked on Hubert's state of mind during his trial, and it was Lord Chancellor Clarendon's opinion that he was a 'poor distracted wretch, weary of his life, and chose to part with it this way'.

Posted by India Office Records at 09:00:00 in Crime , Manuscripts , Religion