Sanitary technology at East India House and the India Office

In a previous post, we looked at issues of sanitation at the Fort William Garrison in Bengal, which included a description and plan for new urinals.  This is not the only reference to urinals in the India Office Records and Private Papers.  The East India Company was also concerned with improvements in sanitation closer to home.  In 1851, the Company headquarters was East India House in Leadenhall Street in the City of London, a building that had been remodelled and extended at the end of the 18th century.  By 1851, in light of new sanitary technology, improvements were required.  A report from the Clerk of Works recommended that the urinals near the General Court Room be upgraded.  They needed to be enlarged and fitted 'with enamelled slate Partitions, with the doors acting to throw a jet of water each time it is used'.  The Clerk had done his research, having viewed the urinals at the House of Lords and at the City of London Club House, but in his opinion by far the best design was those in use at the South Eastern Railway Station (London Bridge) and these he proposed be replicated at East India House.  The bill for the works, presented at a Finance and Home Committee Meeting on 18 February 1852, was for £64 16s. 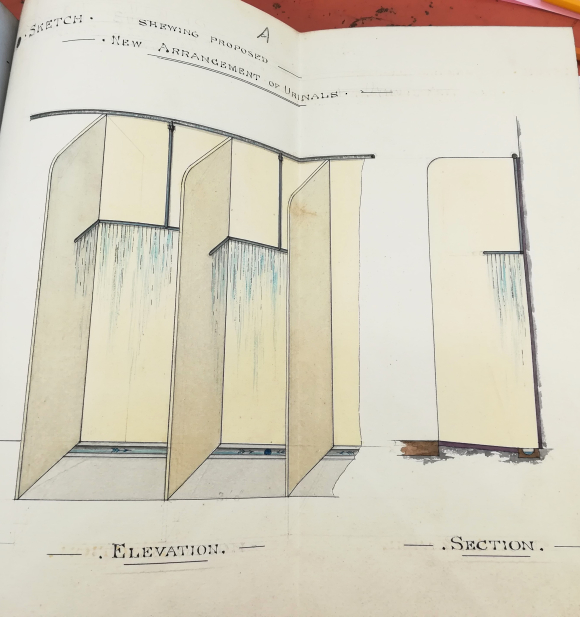 In 1858 the India Office took over from the East India Company, and the newly formed Government department moved in 1867 into a purpose built building in Whitehall designed by George Gilbert Scott.  By 1883, plans were put forward to improve the sanitary fittings, and approval was sought for initial works to be carried out on urinals in both the basement and on the second floor, as an ‘experiment’.  It was agreed that the basement was problematic, being the area 'where there is the most difficulty in securing careful usage', and as such required urinals proposed in Plan A, with a continuous water flow.  For the second floor urinals, where 'sufficient care and cleanliness in the use of the urinals can be depended on', plan B was to be used which employed an overflow system into a slate channel.  Again, the Clerk of the Works had done his homework, and Plan B was based on a similar system employed at the Bank of England.  The refurbishment was considered 'a great improvement as to cleanliness, and that [the urinals]… can more easily be kept in order and in good repair', and as such funds were authorised for works to be extended throughout the building.  In 1885, the total costs of the project were reported as £473 5s 9d compared to the original estimate of £450. 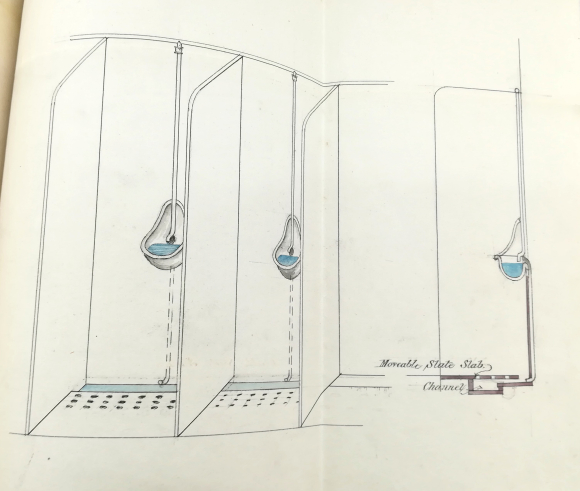 It is interesting to note that the sanitation works at the India Office included improvements in water re-use.  Waste water from the hydraulic lift system was stored in a cistern and was used for flushing both WCs and urinals.  But when the lifts were used frequently, the cistern achieved capacity and the excess water literally went down the drain at Charles Street.  Changes to the pipes and plumbing were put in place to move more of the waste water around the building and so use more of it for flushing.

On a final note, for anyone interested in researching sanitation and sanitary conditions in our records, it is always useful to search using a variety of contemporary terms.  Think ‘lavatories’ and ‘privies’ as well as ‘urinals’.  You never know what you might find.

Posted by India Office Records at 09:00:00 in Health , Innovation , Science and environment , Work