There were two kinds of soldiers’ gardens in British India: regimental and company.  Regimental gardens were worked by the men for fixed rates of pay, or by local people under supervision, and they supplied vegetables for the military commissariat department or the local market.  They were situated at a convenient distance from the barracks.  Company gardens were worked solely by the soldiers for their own amusement and benefit, and they were located in the immediate vicinity of the barracks. 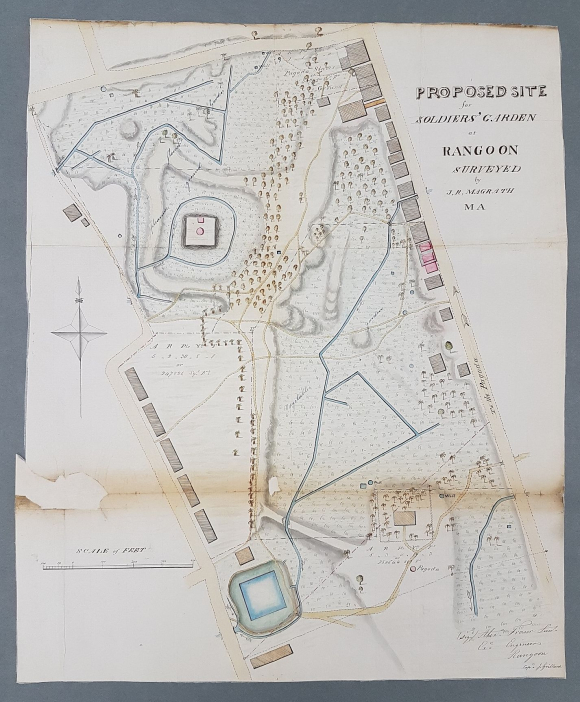 All proceeds from the sale of produce from a regimental garden were paid into a fund managed by a committee of three officers.  Working expenses were drawn from the fund – repair of tools, well gear, or walls and fences; seeds; pay for Indians to work the well.  The balance was divided between the soldiers working in the garden in proportion to their skill and industry, and the produce of their labour.  Annual accounts were accompanied by a statement giving full information about the working of the garden, the number of men employed, and the effect on their character.

The military works services ensured a sufficient water supply to irrigate the gardens.  Cattle were used to work the wells.  The ordnance department supplied garden implements at set rates.

Commanding officers submitted annual requisitions for flower and vegetable seeds to the superintendents of botanical gardens at Saharanpur, Calcutta, and Poona.  The superintendents made notes on the cover of each package of seeds – name, quantity, month for sowing.  Seed potatoes were supplied free of charge by the army commissariat.

Cash prizes for soldiers’ gardens were awarded by the government according to a scale laid down in army regulations.  The distribution was treated as a fête and a holiday for the men.  A band played and the regimental school’s children attended.  Officers were told to make a point of being present at the distribution of prizes.

When new troops moved into the barracks, regimental and company gardens were inspected, and the cost of any necessary repairs to surrounding walls, fences or tools was paid from the garden fund.  The incoming corps had to purchase the fruit trees and any crops in the ground.  One week before the march of regiment, the commissariat officer employed native gardeners to keep up the gardens.  The gardeners were discharged a week after the arrival of the new corps.

Full instructions for the cultivation of gardens in India, both in the hills and on the plains, were contained in a pamphlet written by the superintendent of the government botanical garden at Saharanpur.  Commanding officers could buy the pamphlet at the cost of one rupee per copy.

Gardens for native troops might also be sanctioned at newly occupied trans-frontier stations and remote places lacking local supplies of fresh vegetables.  In these cases, the government gave a grant of money to purchase land, tools, stock the garden with seed, and pay the wages of a mali for one year.  Commanding officers were responsible for these gardens being managed as self-supporting after the first year.

Posted by India Office Records at 09:40:00 in Leisure , Science and environment , South Asia

Posted by India Office Records at 9:40 AM