The HCLF, chatbots and balancing cats

What links chatbots with balancing cats? The Human-Computer Learning Foundation (HCLF) was founded in 1994, by computer scientist Donald Michie; psychologist Jean Hayes Michie; and television producer Rupert Macnee (son of Patrick Macnee, star of the 1960s TV show The Avengers). The HCLF was a charitable trust created for the purposes of furthering for the public benefit 'the awareness, understanding, and use of human-computer learning and artificial intelligence'. 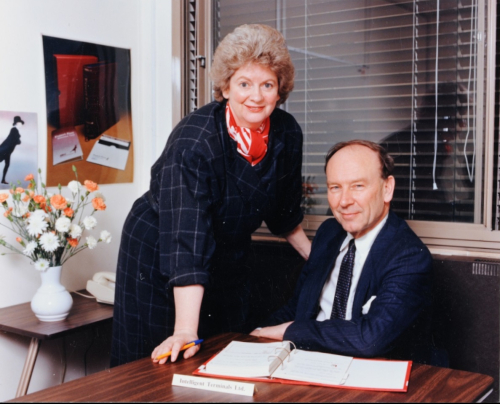 Donald Michie and Jean Hayes (Add MS 88958/5/4), reproduced with permission of the estate of Donald Michie

The HCLF defined human-computer learning to mean "that the human and computer partners both learn from each other as they go along, exchanging partly formed concepts while each assisting the other to bring nascent ideas and conceptualisation to levels difficult for either to attain alone".

The administrative papers of the HCLF were collected over the life of the organisation by Rupert Macnee, and donated to the British Library in 2020. Rupert served as secretary for the HCLF from its inception. The archive includes registration and legal documents, correspondence, accounts, meeting minutes and articles. Many are printed on the back of documents relating to Macnee's work as a television producer. 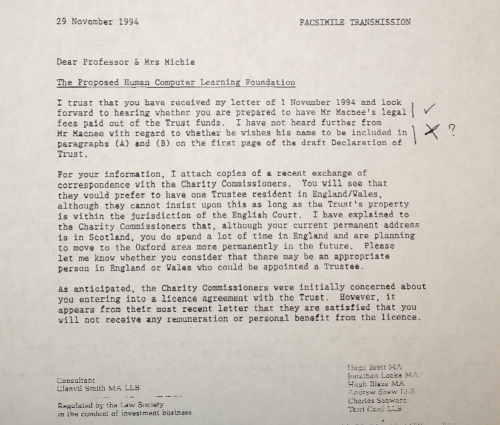 Letter regarding the charitable status of the proposed HCLF, Add MS 89496/2. Reproduced with permission of Rupert Macnee and the estate of Donald Michie.

The HCLF felt that technology and the internet's rapid development was causing people to be left behind, creating a gap in skills required to obtain jobs. The papers trace how the HCLF began developing downloadable computer games designed to build the user's perceptual and motor skills, whilst simultaneously developing the knowledge base available to the computer. One of these games involved a pole-balancing 'polecat'. An idea to try and incorporate the popular Japanese manga and cartoon chat character Doraemon to boost sales in Japan was suggested, but after actually seeing the character's appearance they deemed his design to be too round for their requirements. Some skills could be learnt using a voice instruction system developed by the HCLF, known as "Automated Voice-Over Training". Macnee provided the test voice for the system, likening it to Obi-Wan Kenobi tutoring Luke Skywalker in Star Wars. They discussed the idea of partnering with Disney or Warner Brothers to create a version for children. 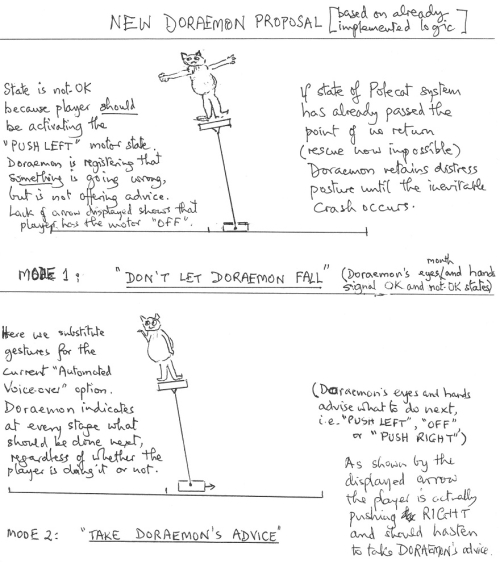 Developing the 'polecat' game with a view to incorporating the character Doraemon, Add MS 89496/3. Reproduced with permission of the estate of Donald Michie.

The archive also reveals how the HCLF developed a 'chatbot' computer program called Sophie, similar to Massachusetts Institute of Technology's ELIZA program from 1964. Sophie was presented as a casual member of staff working for the HCLF. Visitors could 'chat' to her on the HCLF website, but after a certain amount of interaction the visitor would be told that Sophie had to get back to work. As an alternative they could pay and subscribe to her Conversation Club, where they could chat for as long as they wanted. Sophie was programmed to analyse the questions she was asked and provide suitable answers. 'She' would learn from each interaction. A fictitious profile and backstory was created for Sophie, including a family, which had some amusing results. Her brother John worked for 'Woofie Bits dog-food manufacturers', and her sister Julia's religion was listed as 'nature-worship,  vegetarian'. 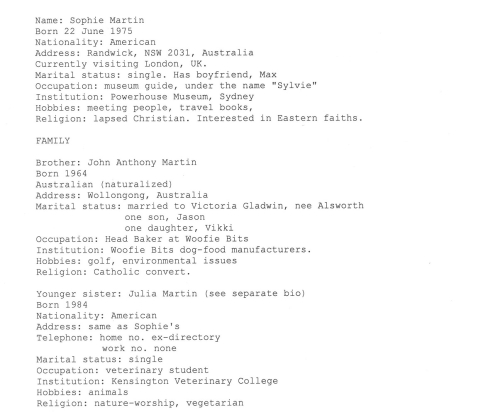 Details from the biographical profiles for 'Sophie Martin' and family members, Deposit 10206. Reproduced with permission of the estate of Donald Michie.

Tragically, Donald Michie was killed in a car crash in 2007, and the HCLF was disbanded shortly afterwards. The study, development and use of artificial intelligence for language learning, however, has continued.

Donald Michie at the British Library
The Donald Michie papers at the British Library is comprised of three separate tranches of material, gifted to the library in 2004 and 2008. They consist of correspondence, notes, notebooks, offprints and photographs, and are available to users through the Explore Archives and Manuscripts catalogue, under references Add MS 88958, Add MS 88975 and Add MS 89072.

The archive of the Human-Computer Learning Foundation can be found at Add MS 89496. For copies of agreements relating to the HCLF please see Add MS 89072/2/3.

Posted by India Office Records at 11:53:02 in Innovation , Science

Posted by India Office Records at 11:53 AM