Sale of jewels and silver by the India Office

In February 1862 a sale of jewels and silver on behalf of the Secretary of State for India was announced in the press. 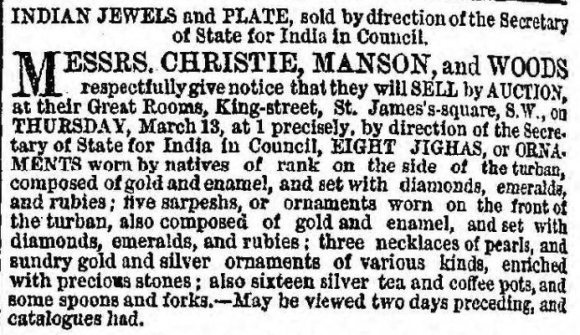 Announcement of sale of jewels and silver by Secretary of State for India  - Daily News (London) 24 February 1862 British Newspaper Archive.  Six sarpeshs were sold, not five as stated here.

The jewels and ornaments to be sold had transferred to the India Office from the East India Company.  They are included in a list made by Charles Wilkins in 1831 of items deposited with the Company Librarian.  At the beginning of 1861, the items were passed to Garrard & Co for valuation:

• Eight jighas worn on the side of the turban by Indian men of rank, and six sapeshs worn on the front of the turban, made of gold and enamel and set with diamonds, emeralds, rubies and pearls.
• Eight necklaces – pearls, diamonds, rubies, musk beads covered with gold filigree, one with a gold locket containing a picture of the King of Travancore.
• Two bracelets – pearls, diamonds, rubies, emeralds.
• Four rings – diamond, ruby and sapphire.
• A pearl tassel.
• Glass models of diamonds.
• Two gold and two silver boxes, a gold casket, and a gold and enamel snuff box with diamonds.
• A ‘curious’ gold mask.
• Two gold nuggets, one with quartz. 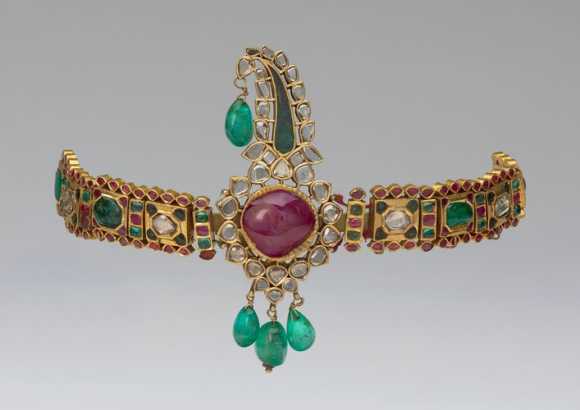 Garrard assessed the turban jewels set with precious stones and pearls to be of inferior quality and therefore of an uncertain value.  The articles without precious stones had been computed at the weight of the metal only.  The jewellers warned that values were ‘very capricious’ and that the India Office would probably realise more at a public auction than through a private sale. 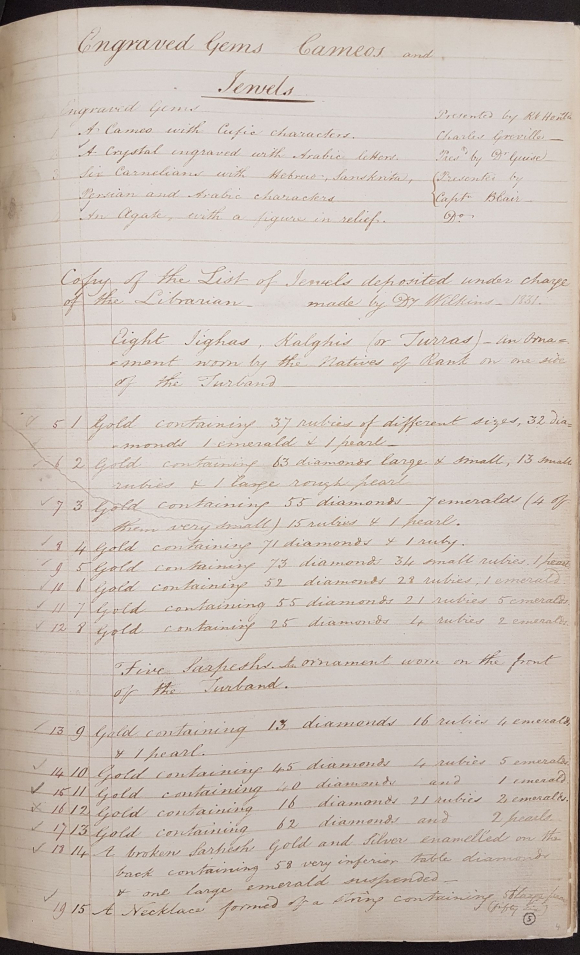 Some items sent for valuation were not included in the auction at Christie, Manson and Woods at St James’s in London:

• ‘A round silver salver of great antiquity supposed to be of Greek or Byzantine art, the period ascribed to this work is the 3rd century’.  There was speculation that this salver had been taken to India by Alexander the Great.  Garrard agreed that it was very old and very valuable.
• A gold plate beautifully enamelled with flowers and birds, and in the centre a lion and sun with Persian characters.
• Sheet gold with Burmese characters inscribed, and sheet silver.
• One small box ‘selected by Mr Mills’.

In addition, the India Office sent for auction a number of silver items which had been used by the housekeeper at East India House - tea pots, coffee pots, sugar tongs, spoons, forks, cream jugs, and a toast rack. 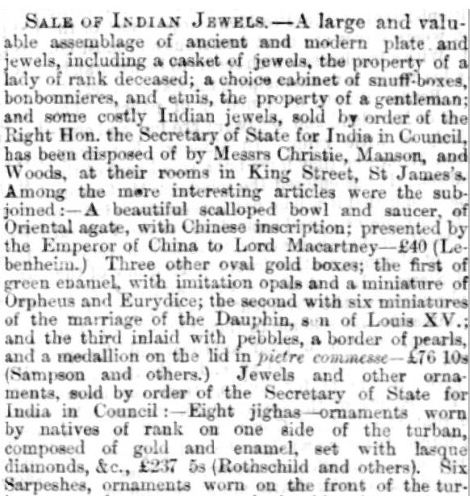 The auction on 13 March 1862 realised a total of £1160 1s 9d for the India Office, with some items returned unsold.  A deduction of £87 was made for commission and advertising, leaving a net sum of £1073 1s 9d.  According to newspaper reports, the Rothschild family purchased some of the India Office lots - a necklace of pearls, rubies, emeralds and diamonds for £119 10s, as well as turban jewels.

Posted by India Office Records at 09:00:00 in Arts and crafts , South Asia