If you thought children’s lift-the-flap books were a modern phenomenon, think again!

We recently acquired Mother Shipton: an exceptionally rare and early lift-the-flap book, with hand-coloured illustrations and a publication date of 1771. This type of book is known as a harlequinade or a turn-up book. Invented in the 1760s and inspired by theatrical pantomime, they took their name from the stock pantomime character Harlequin. They were produced specifically to amuse and entertain children, and were an important landmark in children’s publishing. 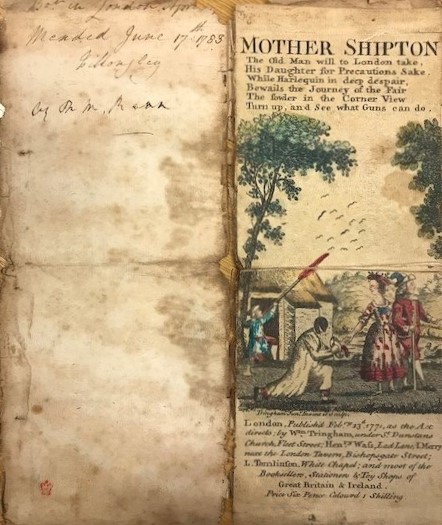 Inside front cover and title page of Mother Shipton

So how do harlequinades work?

This is the tricky bit:
They’re made up of two engraved sheets.  The first sheet is folded perpendicularly into four sections and the second sheet creates the flaps.  Together, they fold up like an accordion.  A verse and picture on each section of the flap tells the story.  When the flap is turned either up or down the reader sees that half of the new picture fits onto the half of the un-raised flap, so the act of lifting one flap after the other creates a surprise unfolding of the story.

Demonstrating how the flaps work on Mother Shipton.

What is this harlequinade about?

This harlequinade tells the traditional pantomime story of Harlequin and Columbine.  It also features Mother Shipton, a soothsayer and prophetess.  Mother Shipton became a popular folklore character from the 16th century onwards, appearing in cheap street literature such as chapbooks and ballads.

However, this little book isn’t as light-hearted as you might think. The colour illustrations depict Harlequin as a Black character.  Harlequin was a stock pantomime figure who traditionally wore a black mask but the racial connotations going on here are undeniable, particularly against the backdrop of 18th century Britain and its colonies, built as they were on a racialised system of enslaved labour.  Georgian theatregoers and harlequinade readers would’ve undoubtedly associated the black-masked Harlequin with an African identity.  In fact, some pantomimes at the time explicitly made that connection, such as Furibond, or, Harlequin Negro (1807).  Elsewhere, playwright and East India Company employee James Cobb referred to Harlequin as “the Blackamoor Gallant” in his The Hurly Burly; or, The Fairy of the Well.  The line between wearing a black mask and blackface was undoubtedly blurred, if not indistinguishable.  It is easy to see the relationship between Harlequin and the racist tradition of blackface minstrels that would develop in Britain and North America. 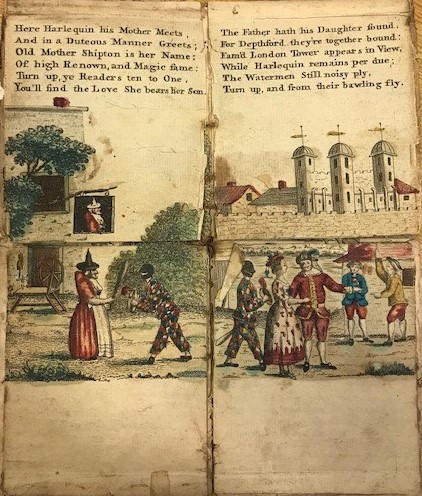 What about this particular copy?

Harlequinades were popular, cheap (6d, or 1 shilling coloured) and, with so many movable parts, it is no wonder that so few survive today.  Devoted former owners often repaired these little books at least once.  This harlequinade was patched up as early as 1783, according to a partially legible ownership inscription on the inside front cover: 'Bo[ught] in London Apr[il] [?].  Mended June 17th 1783.  Fillongley [Warwickshire?] by Th[omas?] M. Rann'.

There are only two other copies of this 1771 Mother Shipton harlequinade in existence, both in North American libraries, and this is only the third harlequinade to enter the British Library’s collections.  It is also the earliest; the other two are The Witches, or Harlequin’s trip to Naples, 1772, and The Comical Tricks of Jack the Piper, 1772 (BL C.135.f.19(1,2)).