A 'pest of skolds' and other 'unruly women' (part II)

This is part two of 'A pest of skolds' - part one can be found here.

In our previous blog on the nurses caring for sick and wounded sailors, we saw one of the more extreme courses of action available to nurses to force the navy into paying them what they were owed.

Lodging and caring for the sick and wounded could be exceedingly costly, and nurses and care workers could be pushed into poverty due to a lack of payment for their services. In a letter to Evelyn dated 9 June 1673, for example, a Mr Hannon wrote of the ‘miserable condicon’ of the people. He informed Evelyn that the quarterers had engaged their credit as far as it would go, and shopkeepers were now refusing to trust them. Consequently, they had been forced to sell and pawn their own goods to provide for the sick, with many ‘now reduced to that poverty that they have not where withal to maintiane their owne family’.

Some nurses made their superiors aware of their condition through formal petitions, as in the example below: 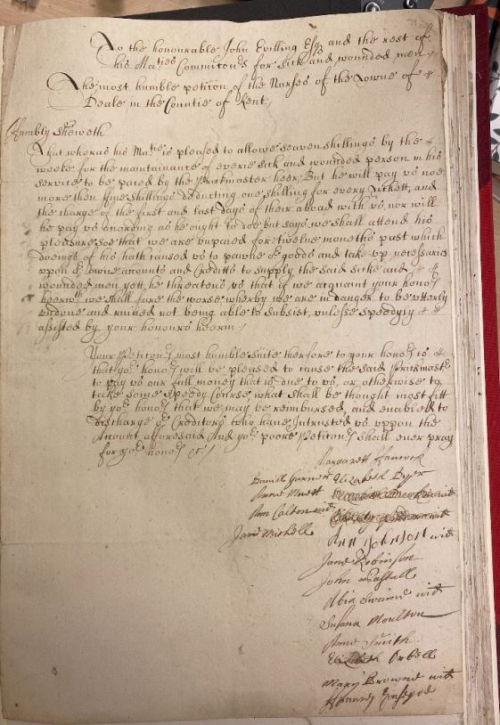 The nurses of Deal petitioned Evelyn on the basis that the crown had allowed seven shillings per week for the maintenance of every sick and wounded person, but the ‘prickmaster’ would pay them no more than five shillings. They also wrote that they had not been paid for twelve months, and were now ‘in danger to be utterly undone and ruined, not being able to subsist, unlesse speedily assisted’.

Fifteen individuals, mostly women, set their names to the petition asking Evelyn to ensure that the prickmaster paid their money in full, and allowed them to discharge their debts to their creditors.

Where petitioning failed, however, there was one further approach attempted by the nurses to recover the losses incurred whilst nursing sick and wounded seamen. This final letter records what Evelyn refers to as a ‘universal conspiracy’ amongst the nurses. He writes that his deputies had already been forced to break open doors in order to procure quarters for the sick and wounded, as the nurses had asserted that they would not receive any more until their arrears had been discharged. 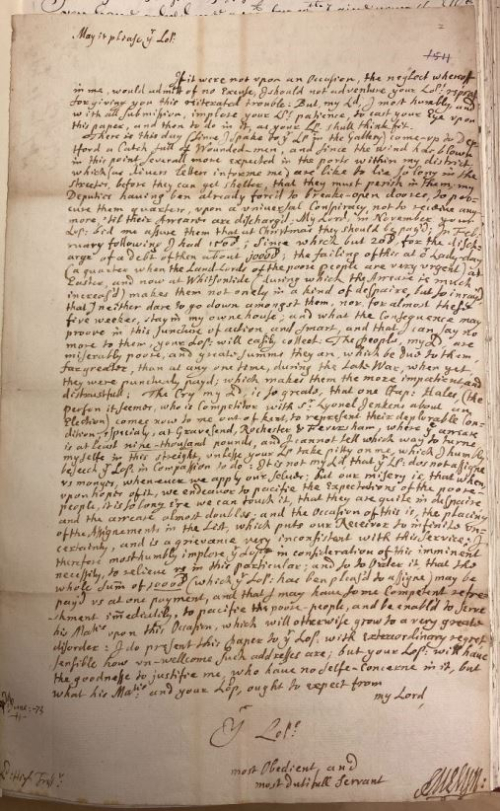 Letter from John Evelyn regarding financial pressures on the nurses, Add MS 78322, f 2.

Evelyn writes that the financial pressure placed on the quarterers ‘makes them not onely in a kind of despaire, but so inrag’d, that I neither dare to go down amongst them, nor for almost these five weekes, stay in my owne house’. At last, he requests that the sum of £1000 is paid immediately, to ‘pacifie the poore-people’, who might otherwise ‘grow to a very greate disorder’.

Together, these letters reveal the struggle that these individuals faced to be paid for their services as well as the means at their disposal to fight back. Where some opted for the more formal approach of petitioning the authorities, others channelled their frustration into action, refusing to take in the hundreds of sick and wounded arriving on their shores without payment in full of their outstanding wages. Others, as we saw in Reymes’ letter in part one, took the fight directly to the commissioner’s door, where they loudly proclaimed their struggles until the authorities were forced to respond.

These were ordinary people, many of whom lived their lives close to the poverty line. Nevertheless they remained indispensable to the success of the navy, and by uniting as one, they were able to make their voices heard.

Matthew Neufeld and Blaine Wickham, ‘The State, the People and the Care of the Sick and Injured Sailors in Late Stuart England’, Social History of Medicine Vol. 28, No. 1, pp. 45-63.

University of Leicester Library Special Collections blog, John Evelyn and the war with the Dutch