A 'pest of skolds' and other 'unruly women': caring for sick and wounded sailors in the Anglo-Dutch wars (part I)

The Anglo-Dutch wars were a series of conflicts fought between England and the Dutch Republic beginning in the mid-seventeenth century and lasting until the late eighteenth century. Contemporary writer and diarist John Evelyn was appointed Commissioner for Sick and Wounded Seamen in the autumn of 1664. Alongside his colleagues in the Commission, Evelyn was responsible for sourcing quarters where sick and wounded sailors could receive medical and therapeutic attention. 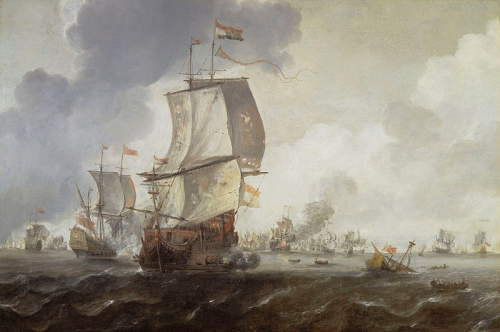 Before the great purpose-built naval hospitals at Chelsea and Greenwich were commissioned, sick and wounded sailors were cared for in a combination of private homes and alehouses throughout coastal towns such as Deal, Portsmouth and Plymouth. Landlords, landladies and alehouse keepers, also known as ‘quarterers’, would provide care and lodging on credit to the navy.

Having been for the most part neglected by historians, fresh attention was paid to the partnership between the navy and private care workers by Matthew Neufeld and Blaine Wickham in their 2014 article for Social History of Medicine. The Evelyn Papers at The British Library contain a wealth of information about the work of these individuals and their fight to be properly compensated for their efforts.

Relationships between the nurses and naval commissioners were frequently strained, as the following letter written to Evelyn in April 1665 from his colleague and fellow commissioner Bullen Reymes reveals.

‘The truth is’, Reymes wrote,

‘I have till of late boyed up our Nurses Spirits, by fayre words, and now and then a littell mony upon my account…but [especially] by promising that I would not goe hence, till I had made all even’. ‘These honest artes’, he informed Evelyn, ‘hath hitherto kept my skin whole, for Billingsgat hath not such another Pest of Skolds, as I have to doe with all’.

Reymes then provided an account of his latest encounter with the nurses of Deal:

‘It seems the other day, they had got a whisper amongst them, as if the Commissioner (meaning me) [was] going to London the next day’.

News of Reymes’ imminent departure seemed to spread quickly amongst the nurses who were concerned that the Commissioner would once again leave the town without paying them for their services. Consequently, they congregated at Reymes’ door and challenged him as he attempted to leave his home the next morning:

‘[A]s I came down the stairs to goe abrod’, he wrote, ‘my entry was barricaded with 20 or thirty of the sharpest tunged women, charging me with an outcry, or rather a jangling (for in an outcry, there may be harmony) of there several wants and nessessetys, and all at once, and that they must have their mony…before I went, and that I should not shrinke to steale away to London as I did last, and not paye them, that they were sure the Good King (god blis him) allowed us money to paye them, & we keepe it, and fed them now & then with a littell, so that their money did them no good, and a thousand other…Complaynts’.

It was not only the twenty or thirty women barricading the door who voiced their concerns, but also:

‘another Squadron of them that stood with out dorres, in the Streete took up as an echo, & redubbled  it back againe, I all this while in the midest of them Crying and Praying them to have patience a littell longer’

These ‘unruly women’, as they are later referred to, would not be satisfied, however, without a solemn promise that Reymes would see to it that they were paid in full. But this was only one of the ways in which the quarterers sought to make their voices heard. In Part II of this blog, we'll explore some more documents that reveal more of their fascinating stories.

Matthew Neufeld and Blaine Wickham, ‘The State, the People and the Care of the Sick and Injured Sailors in Late Stuart England’, Social History of Medicine Vol. 28, No. 1, pp. 45-63.

LSE staff blog, John Evelyn and the war with the Dutch