An intriguing document was recently catalogued as part of the India Office Private Papers, and is now available to view in the Asian and African Studies reading room.  This is a signed agreement between a British family in India and an Indian nanny or ayah. 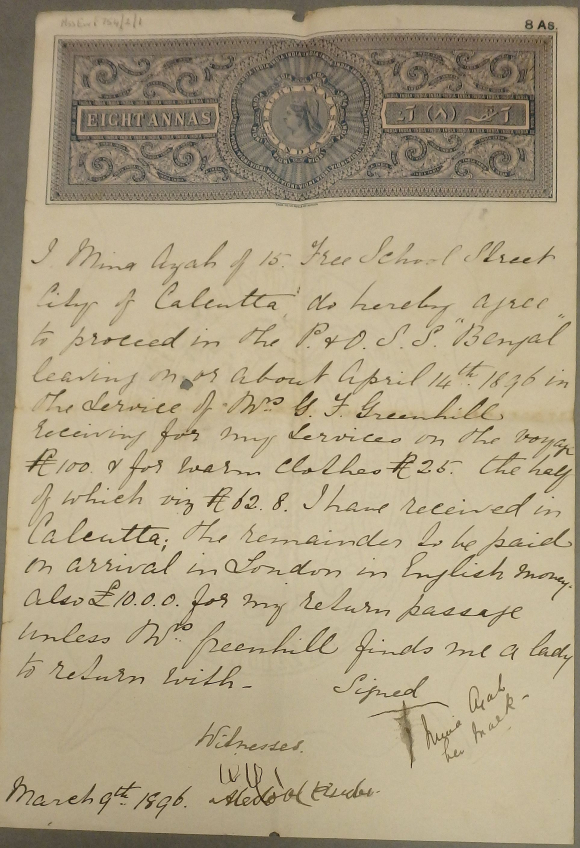 Signed agreement with Mina Ayah of 15 Free School Street, Calcutta, to travel to England in the service of Mrs G F Greenhill on the SS Bengal, 9 March 1896 - Mss Eur F754/2/1

Previous posts on this blog have highlighted the vulnerability of ayahs travelling to Britain in the employ of British families and the danger of being left stranded in London.  A written signed agreement, which specified payment, allowances and provision for a return passage, gave a measure of protection.

The agreement reads as follows:

I, Mina Ayah of 15 Free School Street City of Calcutta, do hereby agree to proceed in the P&O. S. S. “Bengal” leaving on or about April 14th 1896 in the service of Mrs G F Greenhill receiving for my services on the voyage R100 & for warm clothes R25 the half of which viz R62.8 I have received in Calcutta; the remainder to be paid on arrival in London in English money.  Also £10.0.0. for my return passage unless Mrs Greenhill finds me a lady to return with.

The agreement was signed by Mina with her mark, and is witnessed and dated 9 March 1896.

Georgiana died of cholera in Calcutta in 1908, her husband died in London in 1910.  Sadly, Thomas, a Lieutenant in the 4th Dragoon Guards (Royal Irish), was killed in action during the First World War.  He died on 11 February 1916, aged 23 years old, and was buried in the Vermelles British Cemetery in France.  Elsie died in 1955.