Over 300 volumes of East India Company Home Correspondence have recently been digitised and they are now available through an Adam Matthew Digital resource.

There are two series: IOR/E/1/1-195 letters sent to the Court of Directors 1701-1858, and IOR/E/1/196-314 (Miscellanies) copies of letters being sent out by the Court of Directors to Company agents, servants and Government departments 1688-1859.  ‘Home’ indicates that the correspondence is with individuals in Britain and Europe rather than Asia. 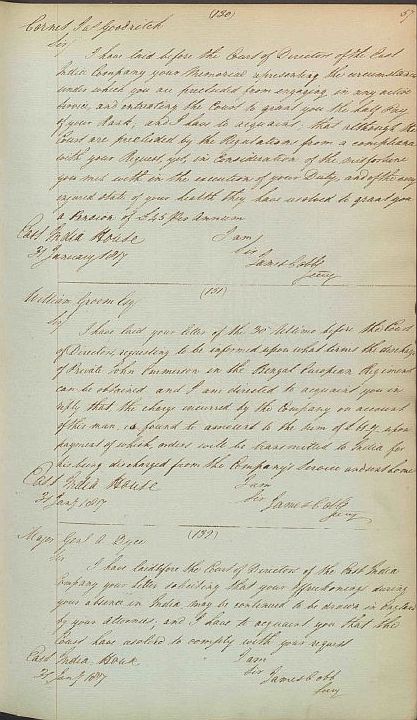 The home correspondence arriving at East India House covers a vast array of topics and subjects ranging from the day-to-day running of the Company, personal requests from employees and their families, and even unsolicited letters advertising patents, proposals and publications.

The correspondence is arranged by the date it was received at the Court, rather than the date it was sent.  The date the letter was received is recorded on the back of the letter, along with any actions taken by the Court, such as referral to a committee; read in Court; laid on the table for any interested parties to look at; or given to a specific individual to answer.  When a letter was read in Court, the Court Minutes [IOR/B] can be consulted to discover the Company’s response.

Much of the routine correspondence relates to the East India ships, including signing charterparties; appointing captains and crew; paying wages, supplies and repair bills; notifications of ship arrivals in various ports; and matters relating to the trade goods being carried on board.   Other correspondence relating to trade includes dealings with Customs officials; notifications of sales; intelligence received from agents in other countries relating to rival companies’ trade and goods; and London merchants sending money and goods to Asia in exchange for diamonds, jewels and coral. 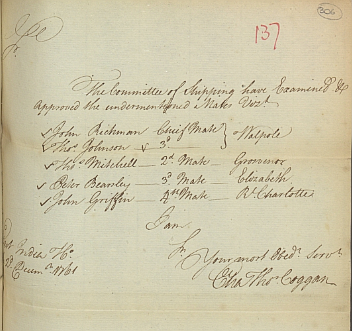 Related to matters of trade and shipping was correspondence with other Government departments, particularly the Admiralty, as Royal Navy vessels often provided escort services for East Indiamen and the ships would come to each other’s aid at sea.

Letters from the Company’s agents in places like Italy, Vienna, Madeira and the Levant also form part of this series.  These tend to relate to packets of the Company’s correspondence sent overland, and intelligence about political relations between countries which might impact the Company.  In the case of Madeira, there are bills and invoices for wine supplied to East Indiamen, the Court of Directors, and key Company employees.

There are also many letters from Company employees and their families, mostly in the form of petitions.  These include requests from employees to be considered for promotion, to extend leave in England owing to illness, or for relief or other assistance from relatives of employees who found themselves in financial distress.  Other topics include requests to send family members and servants to and from India, and the administration of deceased relatives' estates in India.  Occasionally there are letters from people trying to ascertain whether their relative overseas is still alive. 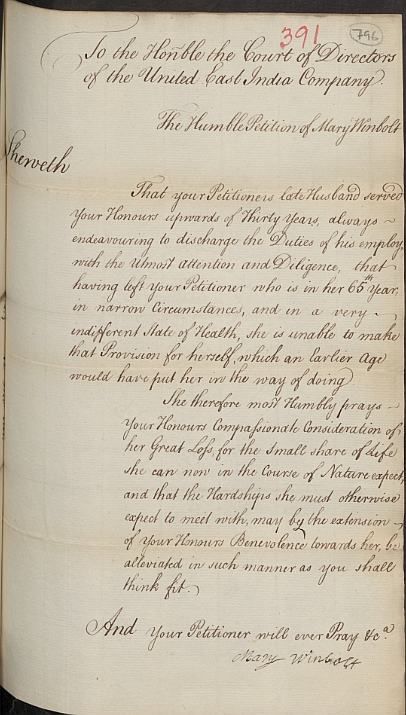 Other recurring themes are concerns about the smuggling of Indian tea into England and Scotland; arrangements with missionary societies for sending supplies to their missions in the East Indies; and letters from individuals attempting to get the East India Company to take up their patent or invention, or to purchase copies of their recently published books.