In the India Office Records are two fascinating registers of discharged soldiers for the period 1820-1882.  They record soldiers other than commissioned officers who served in the East India Company armies in Bengal, Madras, Bombay and St Helena, and in the British Army in India after 1859. 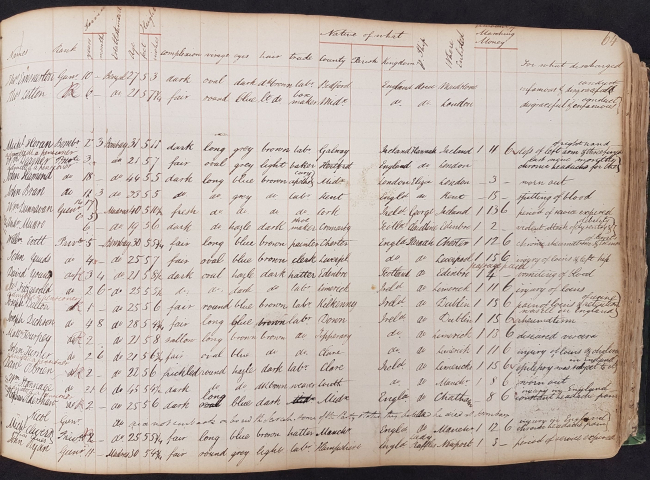 Explanations are given for why the soldiers were deemed unfit for further service.  Some examples of infirmity are broken hips; fractured knees; wounds; liver, kidney, lung, and heart disease; rheumatism; injuries to hands; loss of limbs; constant headaches; poor eyesight; epilepsy; rupture; venereal disease; alcohol problems.  Several men died before embarkation or during the passage home.  Gunners in the Artillery seem to have been especially prone to injury – ‘contracted’ fingers, deafness, being hit by horses falling on them.  In 1858, discharges because of serious injuries sustained in actions during the Indian Uprising or ‘Mutiny’ dominate the register.

Some men with mental health problems were sent for admission to Pembroke House in Hackney, for example, in 1857, Patrick Glendon and Theophilus Boyd.  Their case histories can be read in the Pembroke House register in the India Office Records (IOR/K/2/36).

There are cases of men being discharged when they needed to return to Europe to settle personal affairs .  Others were removed from the army after being involved in criminal activity such as highway robbery.  James Deer, a private in the St Helena garrison, was discharged and sent to England as an infamous character.  He had been being found guilty of burglary and sacrilege after stealing articles from the London Missionary Society at Jamestown Church on 8 December 1821.  He was spared by giving evidence for the Crown against his fellow soldier Samuel Crump who was sentenced to death.  The East India Company Court of Directors and the London Missionary Society submitted petitions to the Home Secretary Robert Peel, asking for clemency for Crump on the grounds of Christian mercy and his contrition. A royal pardon was granted on condition that Crump serve seven years’ hard labour on St Helena.

Charles Gustasson, a native of Sweden, was discharged in 1823 and granted a pension.  He had originally enlisted in 1806 for service on St Helena but ‘being a foreigner’ was moved to the Cape of Good Hope after the arrival of Napoleon on the island in 1815.

In July 1859 William Ruxton, a gunner in the Bombay Artillery returned to Dublin with a pension and a very good character after 23 years’ service.  He was discharged because of old age, loss of vital energy, and bad teeth. He was aged 45.