Following the implementation in April 1923 of the Royal Warrant 1922 a number of Indian Army Officers found their roles ‘surplus to requirements’.

One of the opportunities presented to these officers, was the opportunity to settle in the state of Victoria, Australia, with a significant plot of land for farming.

A financial agreement could be entered into with Australian Farms Limited whereby they would supply the land, tools, livestock etc. required for the officers to establish themselves in farming, and in return the officers would take out a financial loan with the company to cover the costs which would have to be paid back monthly.

The agreement also included an understanding that the gratuities these officers would be receiving from the India Office following their discharge (such as pension, annuities, bonus etc.) would be paid directly to Australian Farms Limited, who would then take their monthly payment from the gratuity received and forward the remainder of it onto the officer. Problems arose however in June 1925 when the India Office was notified that Australian Farms Ltd had gone into voluntary liquidation.  This raised questions about how the officers' gratuities would now be paid to them, as the company had in effect been acting as the agent for these individuals. 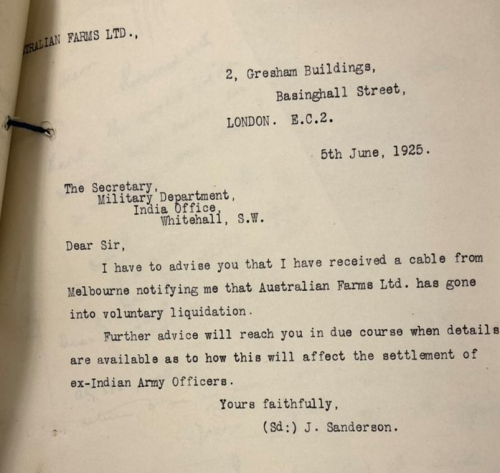 Enquiries were made with the Government of Victoria to identify how many of the 93 individuals who had originally taken out these contracts were still operating these farms, as some individuals had sold their land and bought themselves out of the agreement, whilst others had their contracts cancelled by being recalled to the Army. 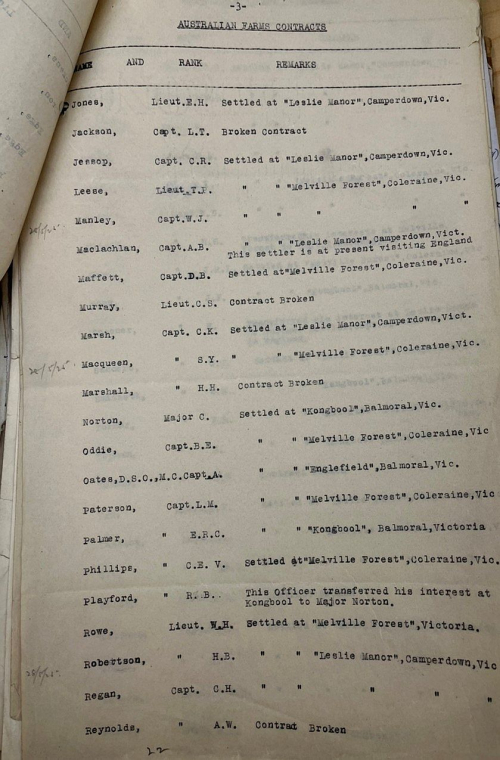 From the original list of 93 individuals, 80 were found to have chosen to remain in Australia and continue with the land and farm in June 1925.  Their contracts were re-assigned to the Treasurer for the State of Victoria, the state government having decided to take on the responsibility for the settling of the land by the officers in question.

Arrangements were therefore subsequently made for the gratuities to be paid via the Government of Victoria in future.  However any officer who was found to be in debt to Australian Farms Ltd at the time of liquidation was required to use their gratuity to pay off that debt first.

Some of the 80 individuals would later choose to sell up their land and return to England, but the vast majority settled in Australia permanently.