Football in the Gulf – some snippets from the early years

With the start of FIFA World Cup 2022 in which Qatar, Saudi Arabia and Iran will be competing, here is a look at a few mentions of football in the Gulf from the 1930s to the early 1950s from the digitised archives of the Qatar Digital Library. The Administration Report for the Bahrain Agency for 1933 reported there were ‘seven football clubs in Bahrain.'.

Apart from regular fixtures, special football matches were arranged on a number of different occasions.  In January 1935 on the anniversary celebrations of the accession of Shaikh Hamad bin Isa Al Khalifa as ruler of Bahrain, the Bahrain Sports Club arranged a fancy dress football match.  The British Political Agent, Colonel Percy Loch, wrote to the Adviser to the Bahrain Government, Charles Belgrave, that he would not be able to attend due to an afternoon reception and then Shaikh Sir Hamad’s dinner.

Football matches were also often arranged on the arrival of a British ship in port.  For example, in October 1951 the British consulate in Muscat wrote to Sayyid Tarik bin Taimur (the father of the current ruler of the Sultanate of Oman, Sultan Haitham) to ask if he would care to play in a Muscat team against a visiting team from HMS Loch Quoich. 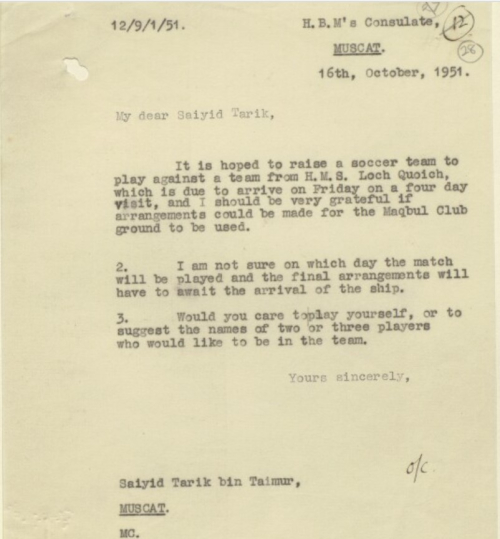 Letter to Sayyid Tarik bin Taimur to ask if he would care to play in a Muscat team against a visiting team from HMS Loch Quoich  IOR/R/15/6/301, f 28

As in contemporary times football and politics are often inextricably intertwined.  In the late 1930s the provision of sports facilities including ‘soccer fields’ featured in a report by a journalist entitled ‘IS JOHN BULL’s FACE RED’ which lampooned British officialdom for its perceived ineptitude in the handling of the oil opportunity in Bahrain.

Then, as today, the provision of facilities to play football in the Gulf can attract comment in the media both positive and negative.