Henry Evanion, born 1832 in Vauxhall, London, was a 19th-century conjuror and entertainer.  Evanion’s career began aged just 17 and throughout his life, Evanion performed across the country in small towns, entertained royalty in private performances and had a successful run at the Crystal Palace in London.  Evanion was also an avid collector of paper ephemera from an early age and amassed thousands of items during his lifetime.  The Evanion Collection represents his widespread interests, with themes including local politics, Victorian entertainment and miscellaneous advertisements for products related to everyday household life.

Are you a star baker?
Bakers in the 19th century were spoilt for choice thanks to an increase in products available for home-baking and the enduring popularity of cookery books like Beeton’s Book of Household Management (1859-1861).

In the Victorian period, the development of new ingredients meant that bakers could make quicker and cheaper puddings.  One Victorian invention was self-raising flour, which was first introduced in 1845.  By the 1880s, it had become a baking essential for households with an 1885 advert from McDougall’s (Evan.6234.), claiming that the flour was for ‘everyday use’ and that it could help to ‘avoid indigestion’. 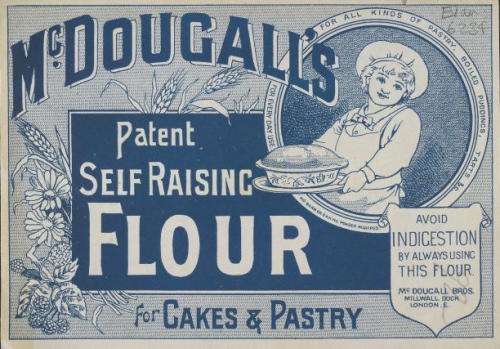 An advertisement for McDougall’s patent self raising flour (c.1885). Evan.6234

A second revolutionary development was egg powder, a cheaper alternative to using eggs in baking.  An advert from 1885 (Evan.4244.) for Freeman’s egg powder shows a  young woman surrounded by the bakes she’s made using the product.  The advert claims that Freeman’s is the ‘largest sale in the world’ and can be used for cakes, pancakes, plum puddings and Yorkshire puddings. Revolutionising Puddings?
An advertisement for Freeman’s Pudding Powder from 1886 (Evan.6504.) offered an alternative for those unable to find the ingredients to make a pudding.  The notice, titled ‘So Glad I Saw This’ tells the story of a woman who asked her friend for the recipe to make a pudding and was surprised to find that the pudding was a powder mix with added milk and sugar. This advert for the mix from 1885 (Evan.6228.) offers to send ladies one of each flavour (almond, lemon, vanilla, peach, chocolate and nectarine) for free by post for 12 stamps.  The witty advert features an image of a judge taste-testing the pudding with the caption ‘delivering judgement – delicious’.  Pudding mixes like Freeman’s revolutionised Victorian desserts because they were a cheaper and quicker alternative to traditional puddings which were labour-intensive and required lots of ingredients.

Next time you are baking a cake, watching a cookery programme or buying a sweet treat from a local bakery, think about the variety of ingredients available today and the ease of opening a tin or using a packet mix to speed up the process. These developments came from 19th-century products like the ones featured here. You can explore more 19th-century baking material via the Evanion catalogue online.