The Collier family of Bethnal Green and the East India Company

Following on from our overview of East India Company Home Correspondence, we look at a document from this collection which is the key to uncovering a wealth of detail about one East London family’s links to India.

In July 1856 Matthew Collier of Bethnal Green, a pewterer in his late 50s, sent a petition to the East India Company asking for a position.  He started by naming five members of his family who had served the Company – his father, two brothers, a nephew and a son.  Matthew said that he had been twenty years with his current employer but now felt inclined to finish his days with the Company as a firelighter or doorkeeper at East India House or in any other ‘low’ situation.  The hours would be shorter than at present and the work much easier. Matthew Collier's petition for a position at East India House - IOR/E/1/193 Letter no. 238

The Company’s Secretary wrote in August informing Matthew that Court of Directors was ‘under the necessity of declining to comply with his request’.

From the information given by Matthew in the petition, it is possible to trace details of his relatives’ service with the Company in other parts of the India Office Records.

Matthew said that his father William Delves Collier had made a voyage for the East India Company in 1790-1791.  He didn’t know the name of the ship but I have found a William Collier who was surgeon’s servant in the Hawke.  William entered the ship on 19 April 1790 and the pay book shows that he was owed wages of £7 11s for ten months and two days. That means that William left the Hawke in Bengal. What did he do then?

Next, Matthew named his eldest brother William who had died in Bombay having served as a sergeant in the European Light Infantry using their mother’s maiden name Evitt.  William Evitt, a painter and glazier, enlisted in the Company’s army in July 1821 aged 19.  In 1825 he was discharged with chronic rheumatism and tremor of the limbs and sent back to England.  He was permitted to re-enlist in 1830.  He married Catherine King at Bombay in 1835, describing himself as a widower.  Catherine, née Hardcastle, was the widow of James King, a sergeant in the Bombay Horse Artillery.  William died on 18 October 1841 and was buried at St Andrew’s Church, Bombay.

According to Matthew, his next brother John Collier was a musician on board the Earl of Balcarras on a voyage to Bengal.  The ship’s journal records that seaman John Collier died at New Anchorage Bengal on 5 July 1826.  On 31 May 1827, William Delves Collier received wages of £5 2s 3d owed to his son.

Receipt for wages of John Collier signed by W D Collier. IOR/L/MAR/B/35Q(2) Pay book for the ship Earl of Balcarras

The fourth member of the family to serve the Company was Matthew’s nephew George Richards who was a private in the European Light Infantry.  Weaver George enlisted at the age of 21 in August 1840.  He died in Aden and was buried on 7 April 1847.  In a will written on 2 April 1847, George left Rs 100 to his brother William Richards of Spitalfields and all the remainder of his estate and effects to his ‘friend and companion’ Private William Theed. 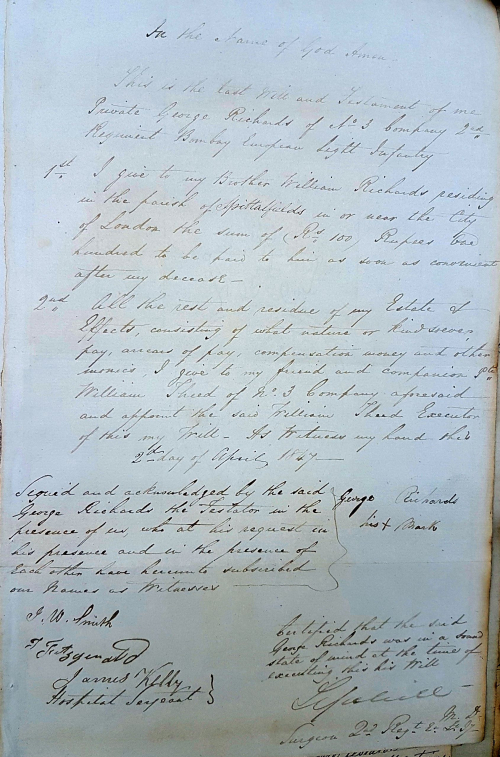 Lastly, Matthew’s son Samuel Collier was a sergeant in the European Light Infantry.  Samuel, a groom, had enlisted for unlimited service in February 1840. He died in Sind on 13 November 1855 aged 34.