On 25 December 1804 Edward Heard of Cork wrote a petition to the East India Company directors in London asking for financial assistance.  Heard had served in the Bengal Army as a young man and said he had no provision for the winter of his days.  He was unable to supply the wants of a large family of a wife and twelve children. 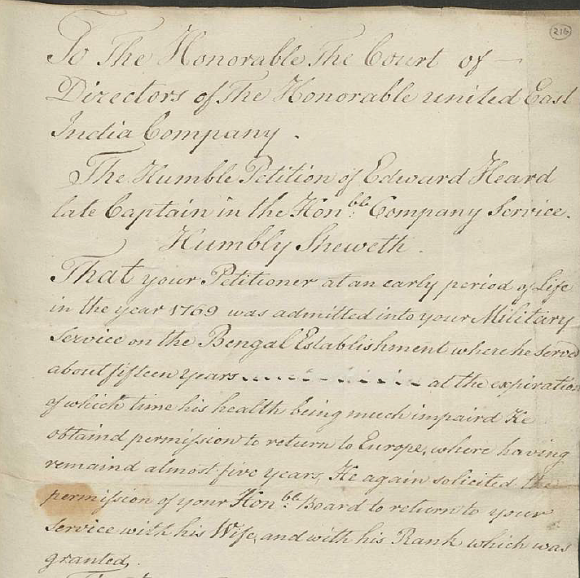 In the petition Heard gave an outline of his army service, and it is possible to flesh out this information from other records in the East India Company archive.

Heard had entered the Bengal Army infantry as a cadet in 1769 and rose to the rank of captain.  He was part of the Bengal Army detachment which marched to Bombay in 1778 as reinforcement in the First Anglo-Maratha War, and he was Adjutant General on the staff of General Goddard in Gujarat.  The detachment also included Dean Mahomed, who later gained fame as the first Indian author in English, and Dean Mahomed's patron Godfrey Evan Baker.  Baker was Heard’s army contemporary and close friend, both men coming from Cork.  Heard was later a subscriber to The Travels of Dean Mahomet, a Native of Patna in Bengal.

Heard said that his health became ‘much impaird’ after the ‘long and arduous Campaign’, and on 12 November 1783 he applied for permission to return to Europe after serving ‘faithfully’ for nearly fifteen years.  There were family matters needing his attention, but it was his ‘positive intention’ to return to his army post in India.  It was agreed that Captain Heard should be permitted to resign and proceed to Europe.  A certificate was issued to confirm that Heard had adjusted all his accounts with the military paymaster – this was necessary if he was to be allowed to return to service.

Having returned to Ireland, Edward Heard married Margaret Drew in 1786.  In November 1788 he requested permission to return to his rank in Bengal.  This was granted, but Heard explained in his 1804 petition that when he and his wife reached London on their way back to India,  Margaret’s ‘sudden severe and alarming indisposition defeated such design’.  Heard asked to remain until the coming season but the Company refused to agree to an extension of his leave of absence as he had been at home for over four years.  The Heards returned to Ireland ‘there to deplore his misfortune’.  They settled at Ballintubber in County Cork.  Heard named his estate ‘Patna’.

How did the East India Company respond to the Christmas ‘solicitations of an old Soldier unable to supply the necessitys of a numerous and helpless Family’?  The directors did not consider his case until April 1805.  After officials had informed them that there had been no communication with Heard since 1789, they resolved not to comply with his request for some mark of the Court’s bounty.

Edward Heard died at Patna, County Cork, in 1810.  The Statesman reported that Heard was ‘universally esteemed and respected’: ‘Preferring heroic fame to the accumulation of wealth, he derived nothing but his laurels from the service, and returned to his hereditary estates in the evening of life’.