In the winter of 1897, Reynolds's Newspaper launched a Christmas Fund for the sandwichmen who carried advertising boards through the streets of London.  This was the brainchild of its editor W. M. Thompson.  The paper appealed to its readers to contribute towards a treat for ‘one of the most hopeless classes in the community- the sandwichmen, or living advertisers’.  These men struggled to earn a few pennies every day to keep themselves out of the workhouse.  A good sum to provide a Christmas dinner for them could be accumulated if readers gave just a penny each.

Donations arrived from all parts of the world.  The newspaper published lists of the donors’ names and the amount given, as well as letters sent from well-wishers.  Lord Rosebery gave £5 and Messrs Rothschild and Sons £21.  The Prince of Wales donated £10.  Queen Victoria sent her warm sympathy and was criticised by a widow from Clifton, Bristol, for not contributing: ‘I see the old girl of Windsor has not got it in her to give a mite, although she is a widow and praised up to the skies as such.  I think myself as good as her, although I have not had as many farthings as she has had pounds.  If she had to scrub and wash for twenty-five years, sixteen or eighteen hours a day, she would tell another tale.  Poor old men – it shows they have one good friend.  I wish I could give more, but it all tells up’.

A travelling showman sent 5 shillings for the noble effort ‘to let in a gleam of sunshine upon the clouded lives of this helpless class of the community’.  Children contributed small amounts from their money boxes. Eight-year-old Leonard Lumer sent four penny stamps ‘hoping they will have a good feed’.  H. S .Persse & Co donated a case of ten-year-old Galway whiskey, the same as supplied to the House of Commons.  Liptons gave tea, Cadbury sent cocoa.  New and second-hand clothes and boots were received. 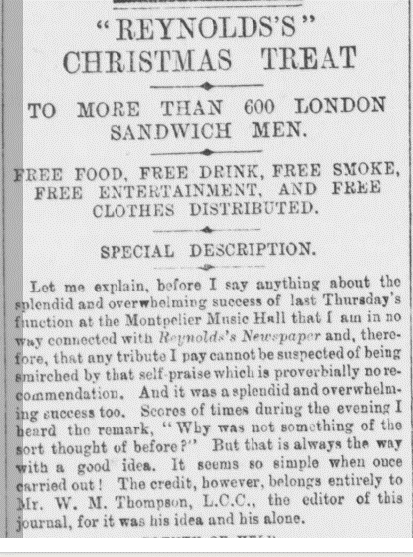 The Boxing Day edition of Reynolds's Newspaper carried a report on the Christmas treat.  More than 600 sandwichmen, both young and old, had gathered at the Montpelier Music Hall where ‘ladies and gentlemen’ were eager to act as amateur waiters and general helpers.

The men were cheery and chatty, drowning out the sound of the grand piano.  ‘What life-histories and tragedies were there represented’ – some had been reduced from a comfortable life-style to tramping the streets advertising the playhouses they could not afford to enter.

After the meal, the men were given pipes of tobacco to smoke whilst enjoying the entertainment provided by music-hall artistes for free.  W. M. Thompson addressed them: ‘Friends, this is not a charitable gathering, it is a family party’.  Thompson hoped that even more could be done for the men the following year.

On leaving, each man was given a Christmas box of one shilling and a pair of socks.  Some also received a package of tea, and 200 bottles of whiskey were distributed.

Reynolds's Christmas Fund for sandwichmen continued into the 20th century.  The last reference which I can find to it in the British Newspaper Archive is in December 1915.