On 11 February 1918 workers from the Chinese Labour Corps based on the front lines in France took a day off from their work and celebrated the Lunar New Year.

The Chinese Labour Corps had been created in 1916 and comprised of over 100,000 men recruited from China to provide support to the British Army during World War One.  They were brought to the front lines of the War in France and Belgium to help with work including building tanks, digging trenches and burying the dead.  Labour Corps workers signed employment contracts for three years and most returned to China after the war.

The Illustrated War News ran several features looking at life on the front lines for members of the Chinese Labour Corps in January and March 1918, and on 6 March 1918 it featured their New Year celebrations in a double page spread. 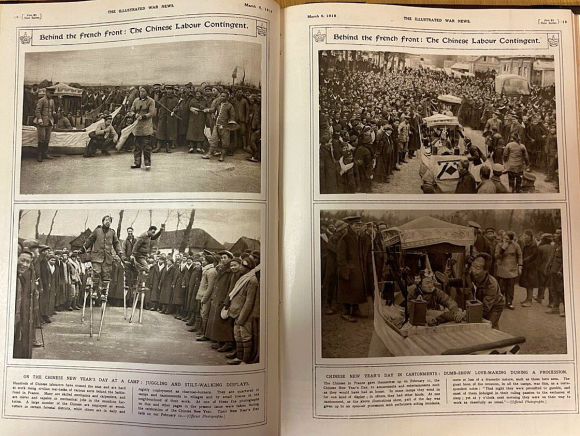 The feature showed Chinese Labour Corps workers based in camps and cantonments across various neighbourhoods in France celebrating the Lunar New Year on 11 February 1918.  The celebrations included entertainments and amusements similar to those they would have taken part in back in China and ranged from jugglers and stilt-walkers to shows and processions.

The celebrations were organised by each neighbourhood with every camp within it staging a different entertainment or show to provide an opportunity for the workers to be able to visit the other camps, enjoy all the festivities and see everyone.

Members of the Chinese Communities in Britain were also able to get involved in supporting the Labour Corp workers celebrations by making financial donations to the Chinese Legation in London for the purchase of gifts to be sent to those on the front lines. 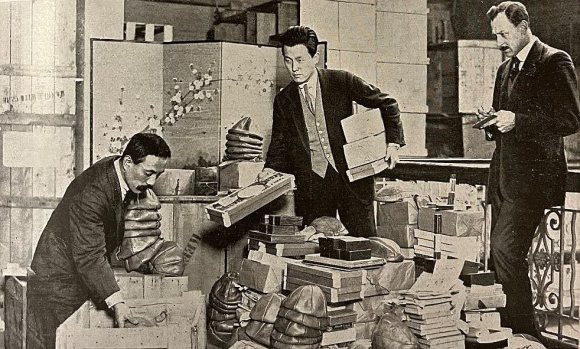 Chinese Legation in London packing crates of New Year’s gifts to be sent to the workers in France and Belgium - The Illustrated War News. London, 1918. Wq7/4518 Vol.7 p.39

Another image featured in The Illustrated War News on 2 January 1918 showed several gentlemen from the Chinese Legation in London packing crates full of the New Year’s gifts that had been purchased to be sent to the workers in France and Belgium.

The Lunar New Year celebration images from The Illustrated War News March 1918 are included In the British Library’s Chinese and British exhibition, which is now open until 23 April 2023.  The exhibition features the invaluable contributions which Chinese Labour Corps workers made to the British war effort, with images and objects including trench art items made by individual members of the Chinese Labour Corps.