From India to destitution in Glasgow Part 1

In July 1873, the India Office received a letter from P. Beattie, Inspector of Poor at Glasgow, regarding a woman named Helen Maria Phillips who was destitute in the city.  The India Office frequently received letters on the subject of individuals who had fallen on hard times, but what was a little different in the case of Helen was that the Inspector quoted a specific piece of legislation in asking the India Office for help. 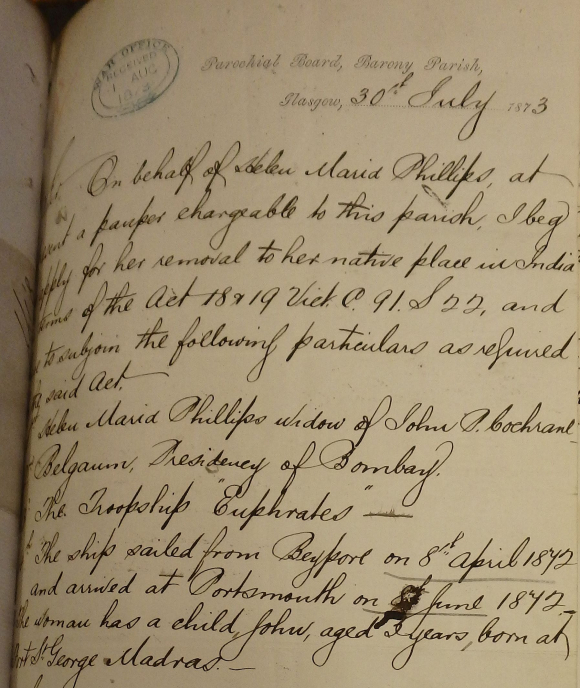 The legislation quoted was Act 18 & 19 Vict, Cap 91, Sec 22, which stated that: ‘It shall be the duty of the East India Company to take charge of and send home or otherwise provide for all persons, being lascars or other natives of the Territories under the Government of the said Company, who are found destitute in the United Kingdom’.  The Act also required the Company to repay any money spent in looking after the destitute person.  It instructed the overseer of the individual to send certain information to the Company, which the Glasgow Inspector of Poor included in his letter:

• Name of the Person: Helen Maria Phillips, widow of John P Cochrane, a private in H.M. 45th Regiment.  This was a British Army infantry regiment, the Sherwood Foresters.
• The place in India that she professed to be from: Belgaum, Bombay Presidency.
• Name of the ship in which she was brought to the UK: troopship Euphrates.  This was one of five ships built after 1866 by the Royal Navy on behalf of the Government of India for the purpose of carrying troops, including family members to and from India.
• Place abroad from which the ship sailed, the place in the UK at which the ship arrived, and date of arrival: sailed from Beypore on 8 April 1872, arrived at Portsmouth on 8 June 1872.

The Inspector also included the information that Helen had a child named John who was 3 years old, born at Fort St George, Madras.  Her father was George Phillips, a general merchant at Camp Belgaum, Bombay.  The Inspector asked that Helen be returned to India. 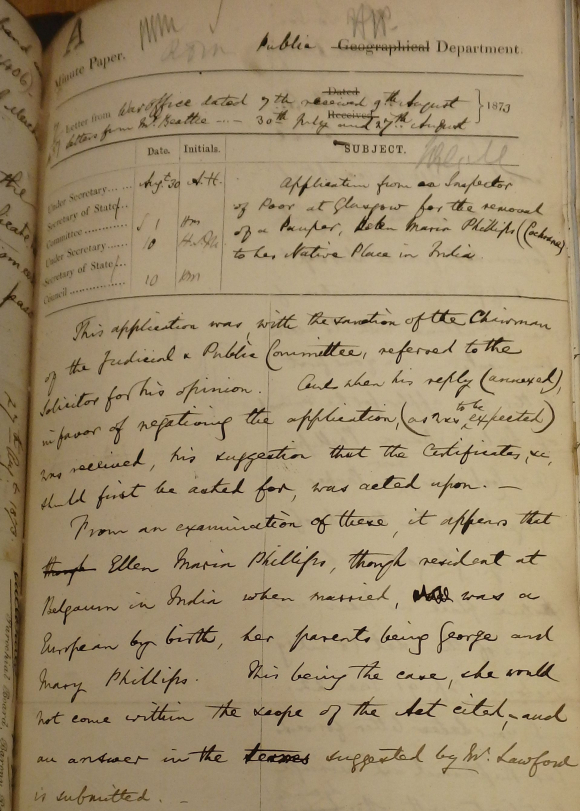 The India Office forwarded the request to their solicitor, Henry S. Lawford, for advice.  They also requested more information from the Glasgow Inspector about Helen.  He duly sent various certificates and documents, which sadly are not in the file having been later returned to him.  An enquiry to the War Office also confirmed that Private Cochrane’s connection with the Army had ceased in 1872 on his discharge from the Service.  From an examination of all the documents, it was concluded that although Helen (or Ellen) had been resident at Belgaum in India when she married, she was European by birth.  This meant that she did not come within the scope of the Act.  On 13 September 1873, the India Office wrote to Mr Beattie declining to comply with his request.

What else might there be in the India Office Records about Helen/Ellen and her family?  Our next post will reveal all!

Further Reading:
Application from an Inspector of Poor at Glasgow for the removal of a pauper, Helen Maria Phillips (Cochrane) to her native place in India, 1873, shelfmark IOR/L/PJ/2/53 file 7/437.