The working lives of Victorian women in England were apt to be hidden, rarely referenced in contemporary publications.  This term could be doubly applied to gifted artist Winifred Arthur (b. 1864 in Lancashire) whose work was literally hidden.  Winifred created ingenious paintings on the fore-edges of books.  The edges were then coated with gilt, thus concealing the image until the pages were fanned out.

Rimmer’s Rambles around Eton and Harrow (shelf mark C.188.a.525.) bound by Fazakerley of Liverpool with a fore-edge picture of Windsor Castle by Winifred Arthur. Image copyright Cooper Hay with thanks.

The Library has recently acquired a copy of Rimmer’s Rambles around Eton and Harrow (shelf mark C.188.a.525.) bound by Fazakerley of Liverpool with a fore-edge picture of Windsor Castle by Winifred Arthur.  Fore-edges are difficult to photograph and Winifred’s signature can be challenging to distinguish.  She signed using her initials W A, visible above on the lower left corner, somewhat resembling a five legged spider.  Specialist Jeff Weber believes it is likely Winifred signed all her fore-edges, other practitioners did not always do this.

Winifred Arthur's initials on the fore-edge

Hiding such decoration was not a new procedure.  'Royal’ examples were made in the 18th century by bookbinder John Brindley for Queen Caroline, Consort of George II.  They were unique and were often included to personalise a book or to enhance presentation copies. Winifred’s edge paintings also had regal recipients, in her case the Princess of Wales, the Duchess of Teck and even Queen Victoria herself. 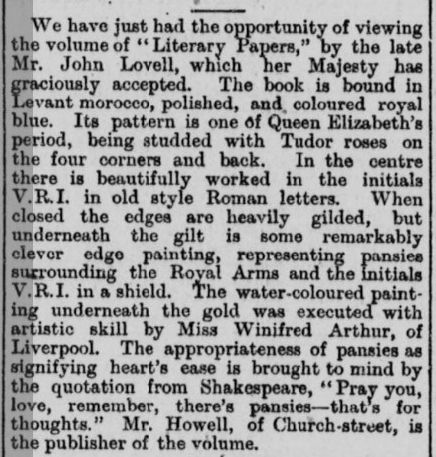 At the age of 16, Winifred was described as ‘Art scholar’ in the 1881 census.  She may have received instruction at the Liverpool school of art and design, which was not far from the family home in West Derby and admitted women students from 1832.  By the 1891 census, Winifred was listed as ‘Artist in watercolours’, implying that she worked on her own behalf.  There is no record of her adult sisters’ employment but her brothers were clerks or assistants.

Winifred was fortunate in that she could conduct business via commissions through the bookshop (and publisher) Howell's of Liverpool (which was founded by her grandfather Edward Howell).  Winifred’s father John Sanderson Arthur managed the shop, as did her brother Edward subsequently.  Without such connections, she would have found it difficult (as a woman) to sell her work.

Winifred’s art appeared in newspapers from time to time.  The Western Mail reported upon the 1898 exhibition of the ‘ladies’ (defined as amateurs) of the South Wales Art Society; 'There are, while perhaps nothing very remarkable, few really bad specimens this year'.  The first contributor named was Winifred Arthur.  The review was mostly positive, though the tone appears tooth-grindingly patronising to the modern ear.  One study was ‘charming’ and ‘admirable’ and another titled ‘Sweet Hawthorn’ was a 'sweet little bit of colour'.  A final sentence concluded that two of her landscapes 'were not so good'.

According to the 1911 census, Winifred lived with her widowed father in Toxteth Park.  He died in 1917.  The 1921 census shows Winifred living in Edge Lane, Liverpool ,with Sara Evelyn Seckerson, her widowed younger sister, and her teenage nephew Richard Arthur Seckerson.  Winifred died on 6 July 1934 at Braddon on the Isle of Man.