Among the books on loan from the British Library to an exhibition of Miniature Books at Newcastle City Library (until 13 March 2022) are Curiosities in the Tower of London (1741) and two small volumes from The Infant's Library (ca. 1800). These little books can be seen alongside The Jan Pienkowski Fairy Library (1977) and a tiny giveaway edition of The Borrowers (ca. 1980) from the Seven Stories Collection housed in Newcastle City Library. They were all designed to be easily held in little hands for the delight and amusement of young children. These historical books made for children are on display together with miniature books made by primary school children in Newcastle and across the UK in 2020 and 2021. 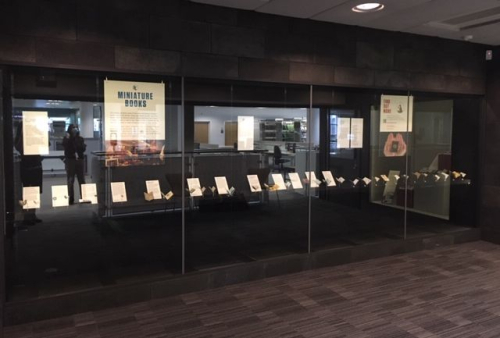 Curiosities in the Tower of London was one of 10 miniature titles produced by Thomas Boreman between 1740 and 1743, at a price of 4 pennies each. Boreman wanted his books to ‘join instruction with delight’ and so he focussed on entertaining children.

Curiosities in the Tower of London was published in two volumes, the first volume contains a description of the Royal menagerie at the Tower. Lively accounts of the wild animals – the lionesses Jenny and Phillis, the lion Marco with his ‘frightful teeth’, and the porcupine, ‘one of the strangest animals in the world’ – and the charming woodcut illustrations all made these little books very attractive to their child readers.

A list of young subscribers is included. However as the cost of the book (4d.) would have represented around one third of a labourer’s daily wage, these children were probably from much more affluent families. 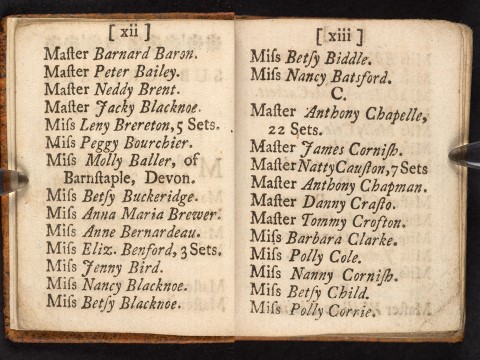 List of subscribers in Curiosities in the Tower of London.

Boreman’s books were unlike other 18th century publications for young children that sought to improve their moral conduct through stories that carried a stern and overtly moral and religious message. Instead Boreman wished to improve his young readers’ minds by inspiring them with a sense of wonder and amusement. This unusual approach marked a turning point in the history of children’s literature.

John Marshall, printer and bookseller, issued 17 small volumes in The Infant’s Library at the end of the 18th century. These little books were intended to be educational, and the collection includes a picture alphabet, a short history of England and a description of scenes of everyday life. However Marshall advertised them as both ‘for the instruction and amusement of young people’. Like his other libraries for children that include The Doll’s Library and The Book-Case of Instruction and Delight, The Infant’s Library offered a practical system of learning through play.

Books 9 and 13 give us a particularly charming glimpse into some popular games for boys and girls. Each double page opening shows a few lines of clearly printed, simple text accompanied by a hand-coloured woodcut illustration of children at play. 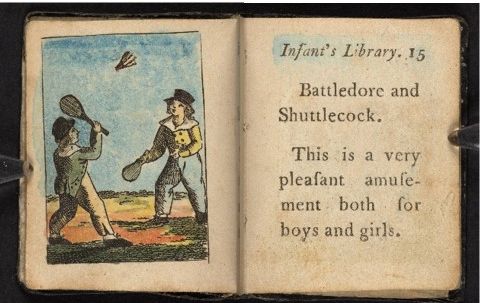 It is interesting to see that while Marshall wanted children to use his books as amusing playthings, his text is not without a corrective moral tone. Girls’ games carries a firm warning about playing on the swing as 'this is a very dangerous play and very improper for young ladies'. 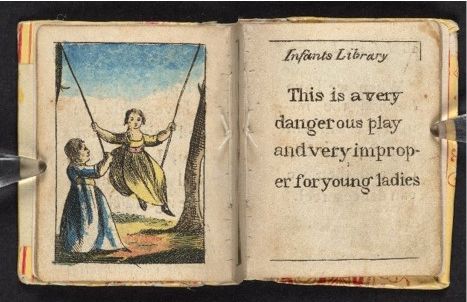 Further images from these volumes can be found on the Discovering Children’s Books website:

Miniature Books – an exhibition of items from the collections of the British Library and Seven Stories is open at Newcastle City Library until Sunday 13th March, 2022.

This is a guest post from Clodagh Murphy, written in 2019 while undertaking a placement with the British Library Modern Archives team as part of the KCL Early Modern English Literature MA: Text and Transmission.

18 July 2020 marks the 300th birthday of Gilbert White (1720-1793), a parson and pioneering naturalist, whose work has been credited with establishing ecology and natural science as we know it today.

White was born at the Vicarage at Selborne, and in 1728 moved with his parents and siblings to The Wakes in Selborne. White enjoyed ‘a childhood immersed in the wisdom of hanger, beech, and stream’, and developed an interest in the natural world that he was to sustain all his life. The Wakes was to become the place where White would establish the ecological practices and methods that would eventually form his most revered work: The Natural History and Antiquities of Selbourne (1789).

After graduating from Oxford in June 1743, White embarked on a series of curacies, travelling around the country until he turned his attention back to Selborne, after the death of his Grandmother in 1759 left The Wakes in his possession. White began to develop a ‘formal study of the garden’ at The Wakes, and started to log his observations in a journal titled the Garden Kalendar, which includes entries on such operations as the growth of melons and cucumbers. In 1767, White’s correspondent Daines Barrington devised a new notebook that he called the Naturalist’s Journal; a record-keeping design which appealed to White, who subsequently set aside his Garden Kalendar and begun this new journal. White’s Naturalist’s Journal was eventually published alongside his Natural History of Selbourne, and is held in the British Library. 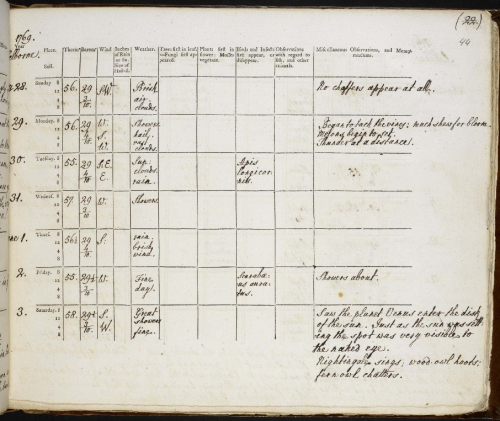 White’s interest in the natural world at Selborne continued to develop until ‘reaching maturity’ in Flora Selborniensis (1766). This volume, consisting of further recordings of the garden at Selborne, was published in 1911 under the title A Nature Calendar and ‘convincingly demonstrates one of White’s principal strengths as a naturalist—an openness to enquiry’.

This curiosity led to White’s ‘principal accomplishment’: The Natural History and Antiquities at Selbourne. 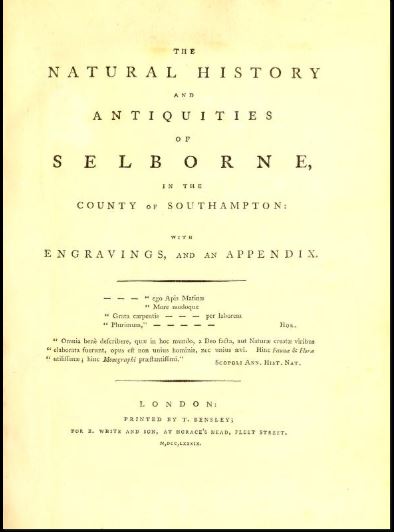 Title page of the Natural History of Selborne

White’s Natural History was published by his brother, Benjamin, in 1789 and is comprised of a series of letters between White and two other naturalists: Thomas Pennant and Daines Barrington. The Natural History was an immediate success and is considered one of the earliest contributions to natural science.

Gilbert White manuscripts at the Library

The original manuscript is kept at the Gilbert White museum in Selborne, but the Western Manuscripts collection at the British Library holds thirty letters from White to Pennant that contain the original form of most of the first part of White’s Natural History (Add MS 35139). The library also holds White’s Garden Kalendar (Add MS 35139), and a printed edition of Alexander Pope’s translation of Homer’s Iliad that given to White by Pope in 1743. The edition contains autograph inscriptions, such as “Given to me by Mr. Alexander Pope on my taking the Degree of B.A. June 30th 1743” and ‘the sole authentic likenesses’ of White in two sketches: one labelled ‘Portrait of G. W. penned by T. C.’ and another of White wearing an academic cap.

Posted by India Office Records at 10:00 AM in British Library Treasures , Manuscripts , Science and environment | Permalink