Libraries are renowned for being quiet places but you should have heard the excited cries of 'Housey Housey!' when we recently acquired a copy of the Saint Albans Chronicle printed in London by Wykyn de Worde in 1520.  Its acquisition means the British Library can now, uniquely, provide access to the complete sequence of printed editions of this English Chronicle. 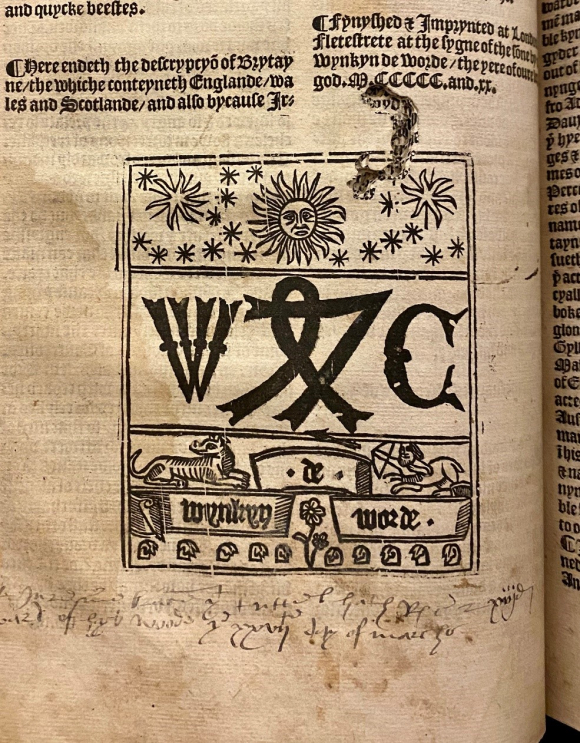 The distinctive Printer’s Device used by Wynkyn de Worde on the last printed leaf of the Descrypcyon of Englande bound before his 1520 edition of The English Chronicle.
British Library shelfmark: C.194.b.430.

Originally Anglo-Norman, the ‘Brut chronicle’ refers to a collection of medieval works on the history of England that incorporate the mythological founding of Britain by Brutus of Troy. It became the most popular vernacular historical chronicle and its wide circulation in manuscript made it an obvious contender for the early printing press.  It saw thirteen editions between 1480 and 1528, the first by William Caxton, and the last by Wynkyn de Worde. 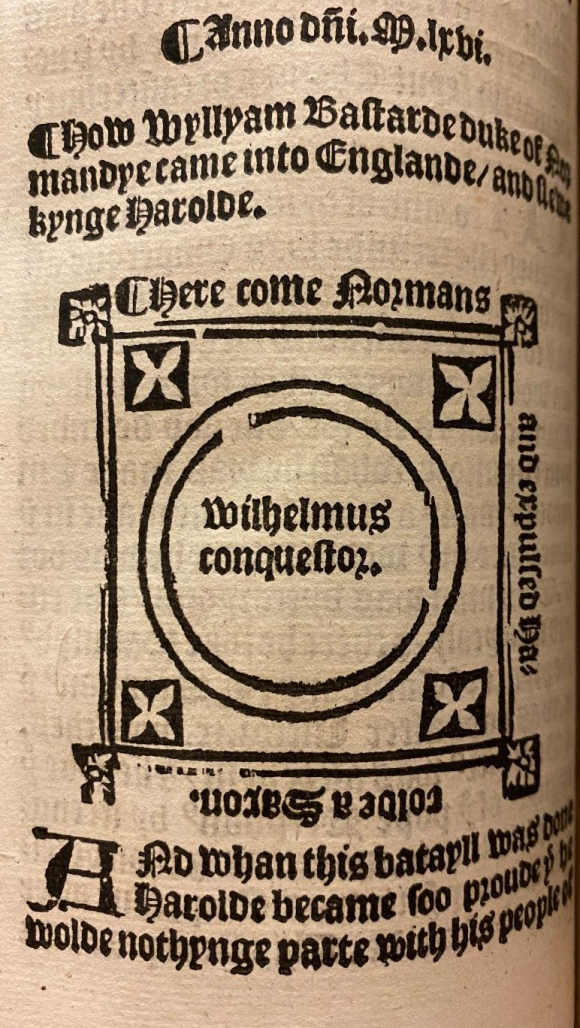 'Here come Normans'! The book’s decorative start to the Norman conquest in the 1520 edition of The Chronicle.

Just as its many scribal forms were embellished and supplemented, the English Chronicle’s printed versions were treated to additions also.  In just the two years between Caxton’s first and second editions the vocabulary of the text was modernized and punctuation increased.  Spacing was improved and the breaking of words was avoided (i.e. gen- | till became Gentille; des ||| turbaunce became dysturbbauce).  Caxton introduced additions using ‘many dyverse paunflettis and bookys’ he had at his disposal and so the Brut was brought up to the times of Edward IV.  Caxton also responded to the growing interest in geography amongst ordinary readers by printing a Description of Britain but his information was lifted from Ralph Higden’s Polychronicon, a 14th-century text badly in need of updating.  The Chronicle and the Description became frequently bound together or printed together in later editions. 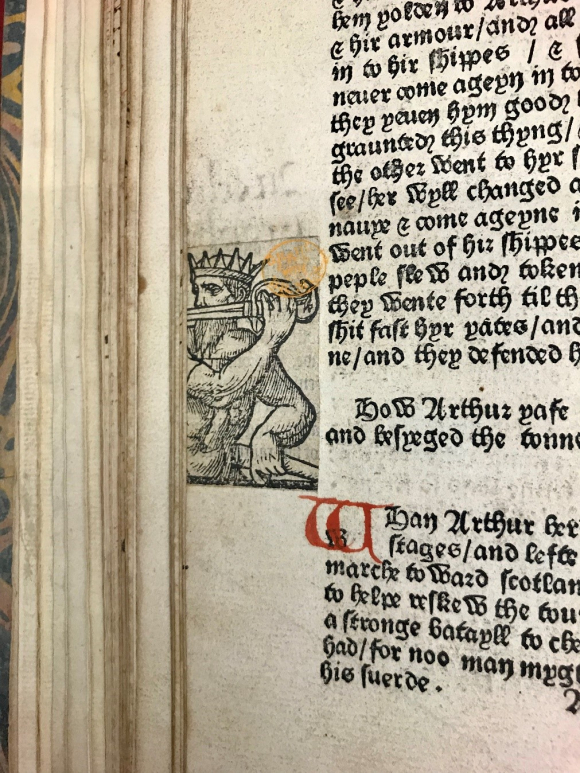 This copy of Caxton’s second edition (1482) has a lovely feature of intervention by a past reader; 35 cuts from the 1577 edition of Holinshed’s Chronicles have been inserted in the margins at an early date. British Library shelfmark C.10.b.4.

In 1486 the work was edited and expanded by the so-called ‘Schoolmaster of St Albans’.  It was given a new prologue, a summary of the lives of the Popes (pre-Reformation of course and destined, as with the newly acquired copy to have occurrences of the word ‘Pope’ censored and scored through) and was generally made more readable.  It also saw the introduction of woodcut illustrations; Biblical and topographical: Tower of Babel, Rome and London.  In 1497 the St Albans text was selected by Wynkyn de Worde for a new edition.  Using more popular illustrations like battle scenes, Kings, and mythological curiosities such as the fabled wrestling match between the giants Gogmagog and Coryn, de Worde published five editions of the Chronicle.  Another London printer, Julian Notary, introduced eye-catching illustrations of Adam and Eve, Noah, and Abraham in his 1504 and 1515 editions.  These illustrate developments in how books were becoming tailored for a wider, more popular audience.  Yet no more than a dozen copies of this 1520 edition survive.  The copy acquired comes with noteworthy English provenance having been in the Library of the Earls of Macclesfield at Shirburn Castle in Oxfordshire since the 17th century. 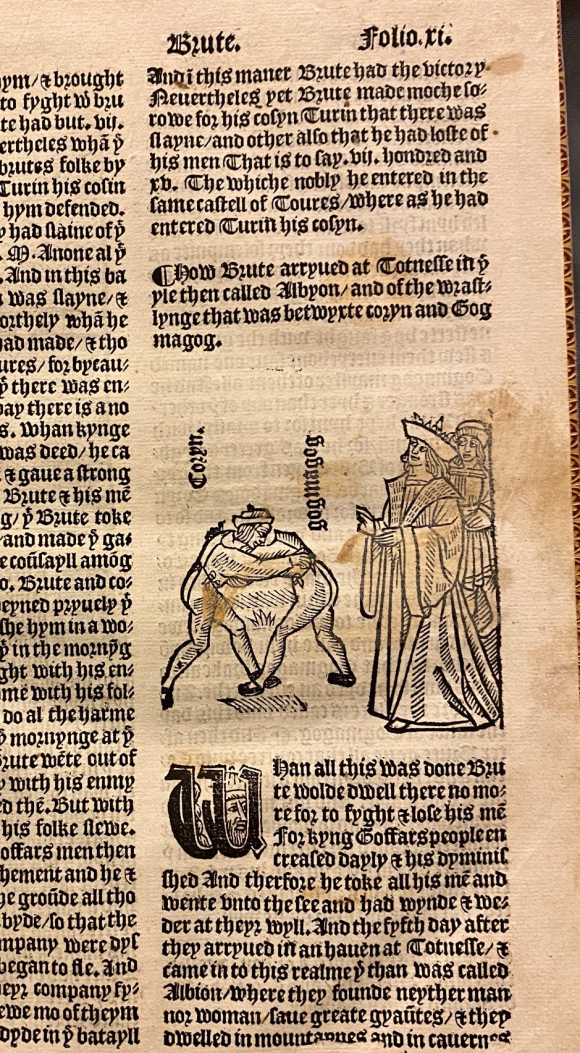 'How Brute arryued at Totnesse in the yle of Albyon / And of the / bataylle that was bitwene Coryn / and Gogmagog.'  This battle is believed to have took place on Plymouth Hoe (where commemorative figures of the two giants were cut into the turf up to medieval times). Coryn defeated Gogmagog by tossing him upon the rocks below.

For library workers it is an especial pleasure to be able to provide readers with examples of the entire printed representation of a particular work - all in one place under one roof – a ‘Full House’ so to speak in Library Bingo lingo! 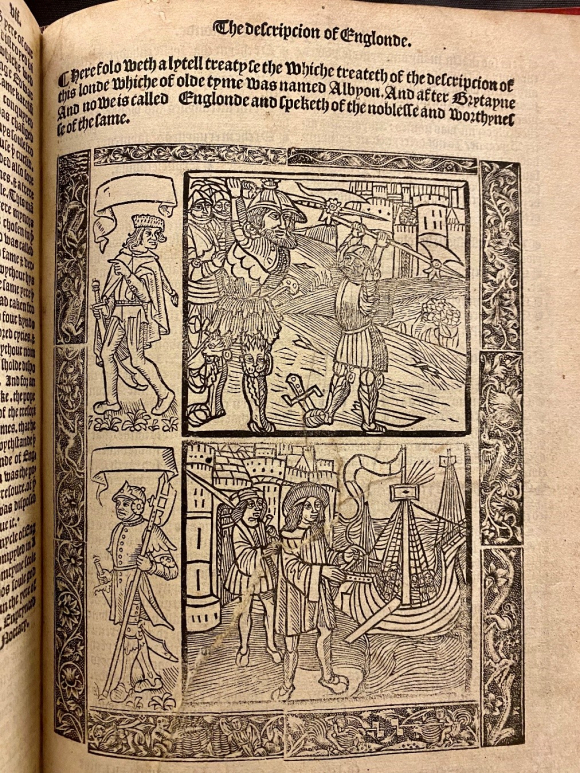 A glorious woodcut illustration depicting violence and ships, both of which feature prominently in the English Chronicle!  Printed by Julian Notary, in 1504. British Library shelfmark: G.5994

'Eyes down for a full house!' All thirteen printed editions of the Brut chronicle held at the British Library.

Posted by India Office Records at 9:00 AM in Medieval history , Rare books | Permalink

The singing priest, William Skeyte, suffered the misfortune of losing a ‘job for life’ not just once but twice, first in consequence of the Dissolution of the Monasteries, and again within ten years as the English Crown drove the Reformation yet harder with the abolition of chantries and free chapels. 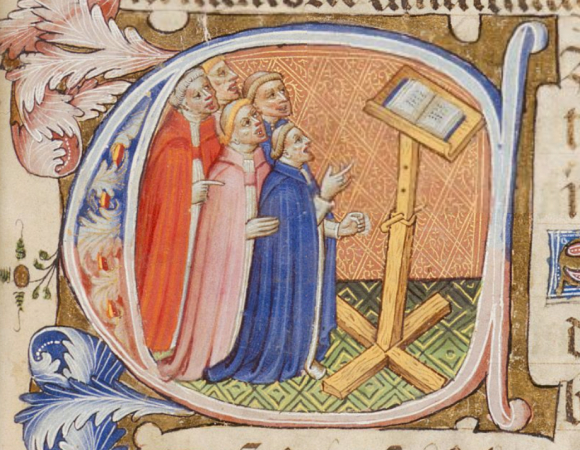 Christchurch Priory (then in Hampshire, now Dorset) was surrendered to the Crown in November 1539 (its cartulary survives at the British Library in Cotton MS Tiberius D VI).  The life pension of £6 subsequently granted to William Skeyte was typical of those received by all of the Priory’s former canons: in modern terms, this might be equivalent to annual income of about £33,000.

The manorial free chapel of St Anne at Hinton Admiral, just three miles from Christchurch Priory, is absent from the Taxatio Ecclesiastica of 1291-2 (Harley MS 591), and so was probably established after that date.  Its endowment in 1448, by the foundation of a chantry within the chapel, provided a salary of 63s 4d for a cantarist, and Skeyte is likely to have taken up this post only after his duties at the Priory had been abolished.  In order to reduce the time they would spend in purgatory, Skeyte would be required to sing daily prayers for the souls of a long list of founders and their family, friends, and benefactors, but primarily for the souls of Elizabeth St. Omer and her third husband, John Syward.  The psalter pictured above was produced initially for a member of her family, and it was from Elizabeth’s second husband that their daughter, Joan, inherited the manor of Hinton Admiral in 1394. 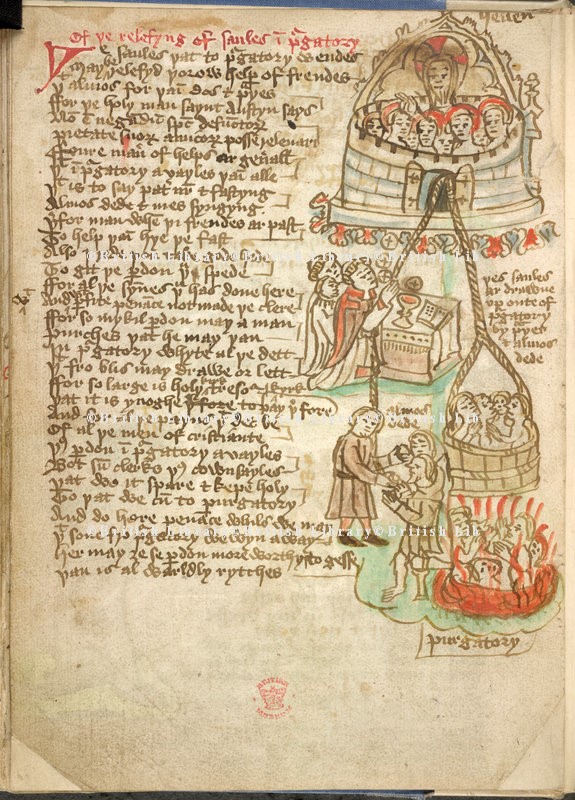 After the closure of the chantries on Easter Day 1548, Skeyte continued to receive his salary in the form of an additional life-pension.  The chapel itself was turned to other uses within the manor.  Its assets, seized by the Crown, amounted to no more than ‘one litle Belle’ weighing about 20 pounds and valued at just 2 shillings, together with ornaments valued at 9 pence and plate at 2 pence. 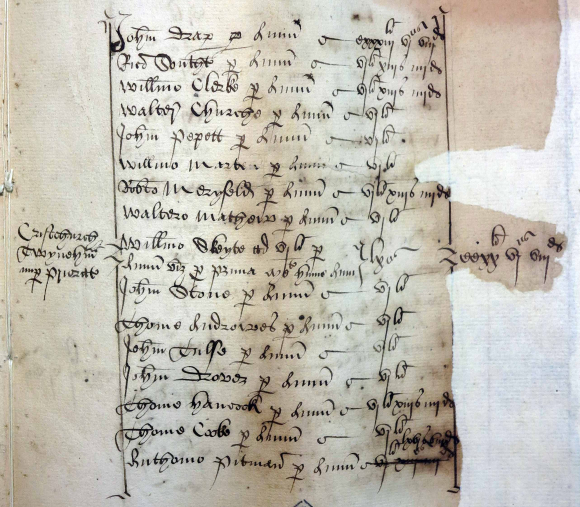 Among Skeyte’s possessions, listed in an inventory taken after his death in January 1551 by the mayor of Christchurch, were a surplice, and a saddle and bridle, all of which had presumably been in daily use for his visits to Hinton.  Curiously, he also owned a sword and spear.  Administration was granted to his brother, Thomas Skeyte, a husbandman of Downton, Wiltshire. 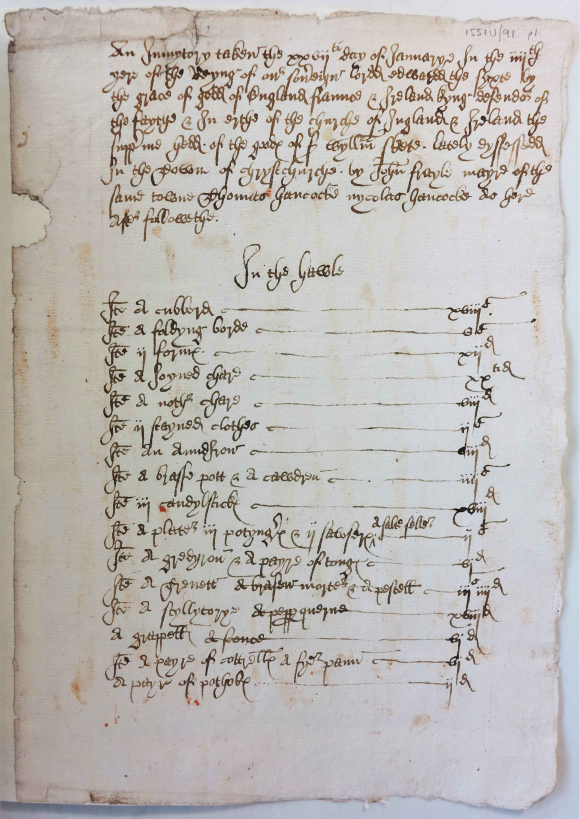 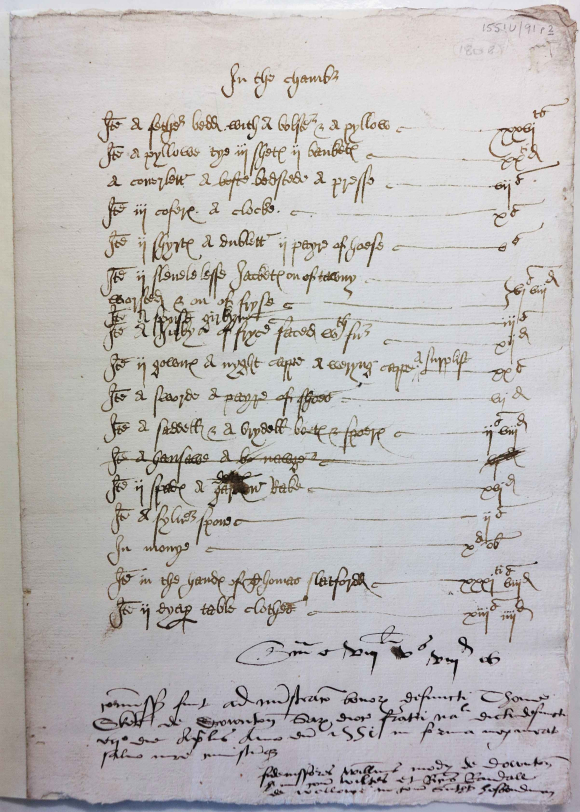 Inventory of the Goods of William Skeyte [Hampshire Record Office: 1551U/091]

The chapel is the subject of ongoing research, which has already established that its structure may have survived until the early 19th century, close to the site of the present-day war memorial at Hinton Admiral.  A century earlier, the manor house across the road was replaced by another elusive building, Hinton Place.

Further reading:
Alixe Bovey, Death and the afterlife: how dying affected the living
Cotton Ms. Cleopatra E v, f.142: Bishop of Worcester's writing on purgatory, with notes by Henry VIII
Crown and Church: How did reforms in religious practice in the mid 16th century affect the people of Britian?
A broader picture and a list of source material is given by Alan Kreider, English chantries: the road to dissolution (Harvard University Press, 1979)
Details of the elaborate dining and shaving routines of the canons in Christchurch Priory before its dissolution can be found at Cotton MS Tiberius D VI, II ff.67-68, published in Katharine A. Hanna, ed., Christchurch Priory Cartulary, (Winchester, 2007).
The Digital Image Archive of Medieval Music has a growing collection of music of the sort that would have been familiar to William Skeyte.

Posted by Margaret.Makepeace at 9:00 AM in Manuscripts , Medieval history , Reform , Religion | Permalink

The Battle of Agincourt was fought between the English and French armies 600 years ago on 25 October 1415, St Crispin’s Day.

And gentlemen in England now a-bed
Shall think themselves accursed they were not here,
And hold their manhoods cheap whiles any speaks
That fought with us upon Saint Crispin's day.
(Shakespeare’s Henry V Act 4, Scene 3) 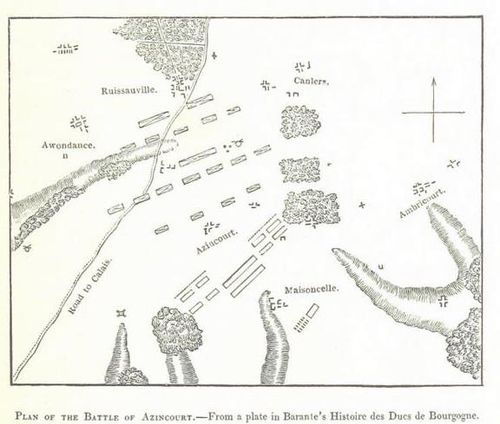 Plan of the Battle of Agincourt from The Chronicles of E. de Monstrelet (London, 1840) BL flickr

St Crispin is the patron saint of shoemakers, cobblers, and leatherworkers.  In the third century two brothers, Crispin and Crispinian, went from Rome to France where they preached Christianity and worked at night making shoes.  The Roman governor had them put to death and they were made saints having been martyrs for their faith. 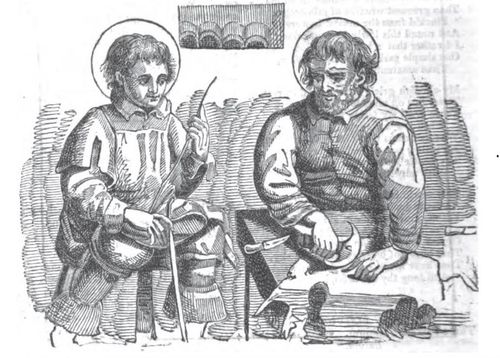 Shoemakers traditionally celebrated St Crispin’s Day with a day off work and much merrymaking. Newspapers often published stories of shoemakers ‘on the drink’ as they kept St Crispin’s Day. An old rhyme ran:

The twenty-fifth of October,
More Snobs drunk than sober.

If it rained on 25 October, St Crispin was said to be helping shoemakers by sending weather that made people think of buying new shoes and galoshes.

William Hone tells the story of Emperor Charles V roaming incognito in Brussels when his boot needed mending.  He found a cobbler but it happened to be St Crispin’s Day.  The cobbler refused to leave the jollities to carry out the repair in spite of being offered a handsome tip by the Emperor: ‘“What, friend!” says the fellow, “do you know no better than to ask one of our craft to work on St. Crispin?  Was it Charles himself, I’d not do a stitch for him now; but if you’ll come and drink St. Crispin, do and welcome: we are as merry as the emperor can be.”’ Charles accepted the offer.  The cobbler guessed that Charles might be a courtier and drank a toast to the Emperor. Charles asked if he loved the Emperor: ‘“Love him!” says the son of Crispin; “ay, ay, I love his long-noseship well enough; but I should love him much better would he but tax us a little less”’. The next day, Charles summoned his host to court.  When the man realised whom he had entertained the previous day, he feared his joke about the Emperor’s long nose would cost him his life. However Charles thanked the cobbler for his hospitality and as a reward ordered that the cobblers of Flanders should bear arms of a boot with the Emperor’s crown upon it, and that the company of cobblers should henceforward take precedence over the company of shoemakers in processions. 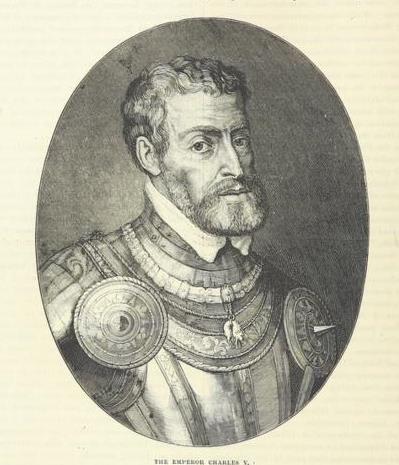 So we wish you a Happy St Crispin's Day!

Ho! workers of the old time styled
The Gentle Craft of Leather!
Young brothers of the ancient guild,
Stand forth once more together!
Call out again your long array,
In the olden merry manner!
Once more, on gay St. Crispin's day,
Fling out your blazoned banner!

From 'The Shoemaker' by John Greenleaf Whittier

Posted by Margaret.Makepeace at 9:00 AM in Journeys , Medieval history , War , Work | Permalink | Comments( 0)