Stamps are important symbols of national identity. Kuwait had first issued its own postage stamps in 1923, and by the beginning of 1933, the Ruler of Bahrain, Sheikh Hamad bin Isa Al Khalifah, had decided that he wished to do likewise.

The Sheikh accordingly communicated his request to the British authorities in the Gulf. The issue would be in the form of standard British Government of India stamps, which were already in use in Bahrain, overprinted (or ‘surcharged’) with the word ‘Bahrain’. A similar format had been used for the Kuwait stamps.

However, there was a problem. Iran (still commonly referred to as Persia) had a long-standing territorial claim to the Bahrain Islands, and the issuing of something as symbolic as a set of postage stamps bearing the name of Bahrain would be likely to provoke protests from the Persian Government.  The British agonised between their desire to meet the wishes of a loyal ally on the one hand, and on the other, their desire not to offend Bahrain’s great neighbour on the opposite side of the Gulf.  Eventually, Britain gave the go-ahead for the issue, the surcharged stamps were produced in India by the Indian Posts and Telegraphs Department, and they went on sale in Bahrain on 10 August 1933. 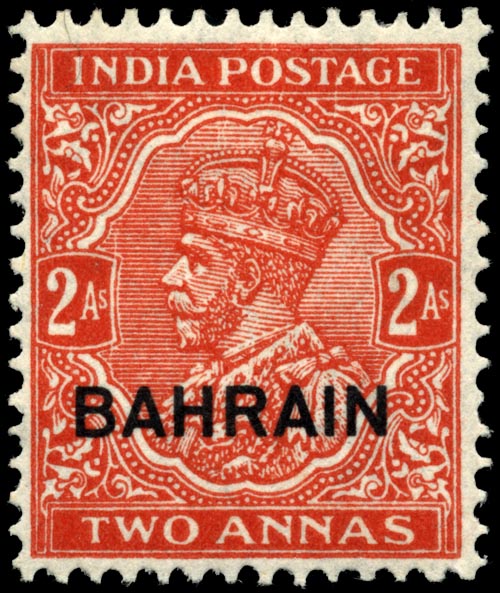 When Sheikh Hamad saw the stamps, he was not impressed. For one thing, he was disappointed that the overprinted word ‘Bahrain’ was in English, not Arabic. He had also expected that his own head would appear on the stamps, not that of the British monarch, King George V. However, a few days later, the Sheikh had cheered up, and given his Adviser, the British-born Charles Belgrave, instructions that a commemorative set of the stamps should be sent to the best known philatelist in the world - King George V himself. 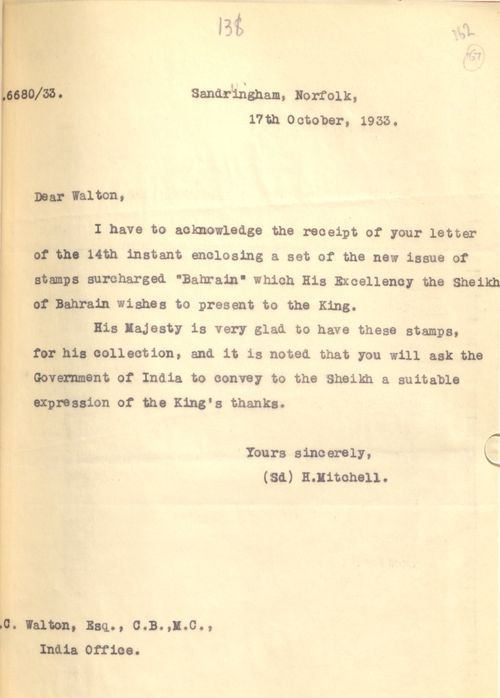 The issue of the stamps produced a predictable response from the Persian Government, which ordered its postal service to treat items bearing the surcharged Bahrain stamps as though no postage had been paid on them whatsoever. The Persian Government had earlier that year made a complaint to the International Bureau of the Universal Postal Union at Berne in Switzerland, asserting the Persian claim to Bahrain. The British now followed this up by having a letter published in four philatelic journals, explaining that Bahrain was ‘like Kuwait, an independent Arab State on the Arabian littoral of the Persian Gulf’. Both sides had also made representations to the League of Nations. 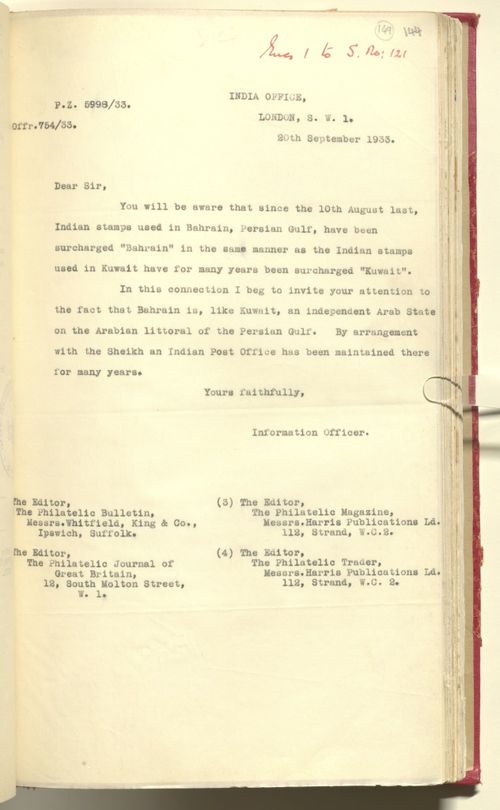 The issue, after being passed from pillar to post, eventually faded away, leaving the Sheikh’s stamps securely affixed for the future.

Posted by Margaret.Makepeace at 9:00 AM in Middle East , Philatelic , Qatar | Permalink | Comments( 0)