History is arbitrary (if we let it)

[A guest post from Jim Boulton (@jim_boulton), reflecting on digital archaeology and why we preserve the history of the web. His exhibition Error 404 is on at Digital Shoreditch at Shoreditch Town Hall. Free entry from 25th to 31st May, 10am – 7pm.]

The Web was born in 1991. In its short life, it has transformed our lives. Yet, due to the transient nature of websites, evidence of the pioneering years of this new medium is virtually non-existent.

The story of the first webpage is typical. It was continually overwritten until March ’92. A record of that monumental point in history has been lost forever. This is not an isolated case. Most sites from the 90s and early 2000s, that shaped how we now work and play, can no longer be seen. Hardware has become obsolete. Media has become redundant. Files have been lost. The fact that digital content is so easy to duplicate means that copies are not valued. Worse, the original version is also often considered disposable.

Archiving websites is not the only challenge. A book displays itself, a website cannot be displayed without a browser. These too need preserving. Throw in the hardware and this makes web preservation a three-part puzzle.

But why archive websites at all?

Take the work of Deepend. Founded in 1994, while their contemporaries were pushing the technical possibilities of the Web, Deepend explored its aesthetic potential. Deepend’s sites for clients including Volkswagen Beetle, Hoover and the Design Museum set the standard that the rest of the industry aspired to. In 2001, Deepend fell victim to the dot-com crash. Its groundbreaking work disappeared with it.

Archiving ensures the historical record is accurate and accessible. Without broad evidence, history is arbitrary, something I was surprised to discover first-hand. It’s frequently stated that the Shoreditch creative tech scene started with fifteen companies in 2008. This is just not true. My digital agency, Large, moved to Shoreditch in 2001 and there were plenty of creative tech companies already there. The convenient assertion is based on a playful Tweet made five years ago. To his credit, the author of the Tweet has done his best to clarify the situation but the myth remains. 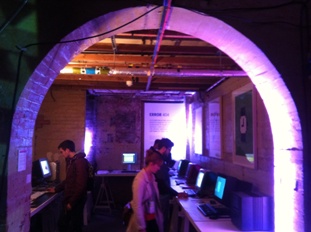 My latest project, an exhibition called Error 404, does its bit to set the record straight. Currently showing at Digital Shoreditch, Error 404 showcases the work of influential Shoreditch-based agencies, including De-construct, Deepend, Digit, Hi-ReS!, Lateral and Less Rain, on the hardware and software of the day. Alongside this culturally important work is an early version of the first webpage, reunited with the first browser and shown on a NeXTCube. The show also includes artwork by pioneering iconographer Susan Kare.

Over the last 20 years we have been privileged to witness the birth of the Information Age. We have a responsibility to accurately record this artistic, commercial and social history for future generations. Long live the archive.

Posted by Peter Webster at 2:14 PM

The new NHS: a reform you could see from space?

[A guest post by Jennie Grimshaw, Lead Curator for social policy and official publications at the British Library.]

The controversial Health and Social Care Act 2012 ushered in the most radical reform of the National Health Service since its launch in 1948. On April 1st 2013, the main changes set out in the Act came into force, and most parts of the NHS will be affected in some way.

Clinical commissioning groups (CCGs) replace primary care trusts (PCTs) and are the cornerstone of the new system. There are 211 CCGs in total, commissioning care for an average of 226,000 people each. Each of the 8,000 GP practices in England is now part of a CCG. These groups will commission the majority of health services, and in 2013/14 will be responsible for a budget of £65bn, about 60% of the total NHS budget. CCGs will be accountable to and supported by NHS England, formerly the NHS Commissioning Board, which will also directly commission primary care and specialist services. NHS services will be opened up to competition from providers that meet NHS standards on price, quality and safety, with a new regulator  (Monitor) and an expectation that the vast majority of hospitals will become foundation trusts by 2014.

In addition, local authorities will take on a bigger role, assuming responsibility for budgets for public health. Health and wellbeing boards will have duties to encourage integrated working between commissioners of services across health, social care and children’s services, involving democratically elected representatives of local people. Local authorities are expected to work more closely with other health and care providers, community groups and agencies, using their knowledge of local communities to tackle challenges such as smoking, alcohol, drug misuse and obesity

Finally, the Local Involvement Networks (LINks) were replaced by 152 Local Healthwatch operating under the leadership of a new consumer champion, Healthwatch England. Each local Healthwatch is part of its local community, and will work in partnership with other local organisations to ensure that the voices of consumers and those who use services reach the ears of decision makers.

The Coalition government’s radical reform of the NHS has attracted criticism on various grounds: of cost and disruption; backdoor privatisation; introduction of price competition, which risks decisions being made on the basis of price rather than clinical need; and determined opposition from health professions.

The scope of the collection

In the light of this debate, the British Library has chosen the NHS Reform of 2013 for its first themed collection of archived websites under the new Non-Print Legal Deposit Regulations which allow it to gather and preserve all sites in the UK web domain. For this collection we have hand-selected the sites of:

Behind the scenes, this intensive crawl of a relatively small number of sites is going on alongside the general crawl of the whole UK domain which we blogged about last week. These sites are being crawled more frequently than would be typical for the domain crawl, but for a three month period.

The collection will be available for onsite access at the six legal deposit libraries for the UK from this summer. We hope that it will present a balanced view of the impact of the reform, and the debate surrounding it. We'll be blogging again nearer the time with a review of the archive.