As curator for sport in the British Library I have had a pretty exciting time in recent years, with plenty of sporting mega-events hitting the headlines in the UK, including the London Olympic Games and recently the Tour de France starting In Yorkshire.

The latter was celebrated by the Library in a number of ways: several members of staff actually biked from St Pancras to our Yorkshire site in Boston Spa (a two-day; 200 mile journey); while I (taking the train!) helped to create a small exhibition of cycling-related collections items in cases close to the newly refurbished Boston Spa reading room. Here I am with my colleague Robert Davies in front of the exhibition.

As with most of the significant events taking place in this country, the web archiving team wanted to make a record of the Tour of Yorkshire’s online presence for future researchers, so I was given a watching brief for relevant websites. 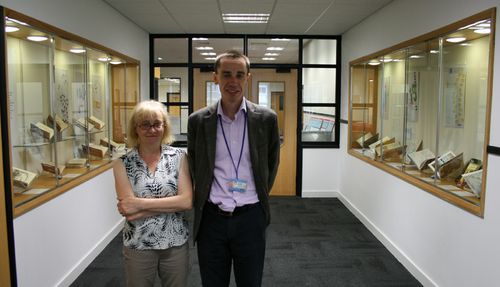 The Grand Depart
Everyone now knows that the Grand Depart was a resounding success in attracting enthusiastic spectators all along its route from Leeds to the Mall in London. The Tour organisers expected three million people to line the roads; they achieved more than double that! I anticipated a great response (similar to the success of the torch relay in 2012) so I was very keen to ensure that we archive the many different websites of the local councils and tourist offices through whose boroughs and counties the tour would pass. Many of these web sites had huge amounts of information on them, from details of local campsites, guest houses and B&Bs to special brochures with interactive maps and lists of events connected to the Tour. Opportunities for future tourism were clearly being optimised.

A mega event
It had to be borne in mind that the Grand Depart was not just a special event for the UK but formed part of a larger sociological and anthropological phenomenon: i.e., the mega-event, a phenomenon which is a growing area of research in a number of subject areas – not only in sport, where the development of organisations like the IOC and FIFA are of interest to sports sociologists and historians – but to economists and cultural observers. The local activity encouraged by such events, like the Tour-associated cultural festivals, and educational projects bear witness to their wide-ranging social impact.

Which websites to archive?
So all this had to be recorded if possible. Add to this the day-by-day; hour-by-hour reports of media organisations like broadcasters and newspapers and there were clearly a large number of websites waiting to be gathered. One aspect did seem to be missing, and that was the protest sites, which tend to be much in evidence with events like the Olympic Games. Contrary to this, most Tour websites were celebrating the Tour in every way possible. Where they did echo the Olympics was in their keen embracing of the successful outcomes of the latter - such as volunteering - with Asda sponsoring a volunteering website which called for route and crossing marshals, ‘dignitary managers’ and coordinators of all kinds.

The riders
The websites of the riders themselves proved problematic at first, as it was not clear until almost the last minute who was going to ride. In the end, as we know, Sir Bradley Wiggins bowed out, but we made sure that we kept a close eye on Chris Froome and Mark Cavendish, as well as the UK based teams like Team Sky, The British Cycling Organisation and the Tour de France organisation itself. It was a huge disappointment to see British hopes being dashed by falls but we can now follow Chris Froomes twitter feed, from his original expressions of excitement to his reports on his MRI scans ‘confirmed fractures to the left wrist and right hand’. While on his Facebook page, Mark Cavendish displays a picture of himself fresh from the operating theatre! Sad, but interesting, times.

The collection
Websites are marvellous research sources for the study of sport in particular. With their aid you can observe events as they take place from day to day, and get a marvellous feel for the atmosphere surrounding these exciting occasions. The process of archiving the Tour sites is not over. In the aftermath of such events the sites will often sum up their experiences, and others may even spring up in response to what has taken place. So the watching brief is certainly not over!