Jen Aggleton is a PhD candidate in Education at the University of Cambridge, and is completing a work placement at the British Library on the subject of digital comics.

If you are a digital comics creator, publisher, or reader, we would love to hear from you. We’d like to know more about the digital comics that you create, find out links to add to our Web Archive collection, and find examples of comic apps that we could collect. Please email suggestions to Jennifer.Aggleton@BL.uk. For this initial stage of the project, we will be accepting suggestions until the end of August 2017.

I definitely didn’t apply for a three month placement at the British Library just to have an excuse to read comics every day. Having a number of research interests outside of my PhD topic of illustrated novels (including comics and library studies), I am always excited when I find opportunities which allow me to explore these strands a little more. So when I saw that the British Library were looking for PhD placement students to work in the area of 21st century British comics, I jumped at the chance.

The reason I hadn’t noticed was because I hadn’t specifically picked up a printed comic or gone to a dedicated webcomic site every day (many days, sure, but not every day). I was however reading comics every day on Facebook, slipped in alongside dubiously targeted ads and cat videos. It occurred to me that lots of other people, even those who may not think of themselves as comics readers, were probably doing the same. 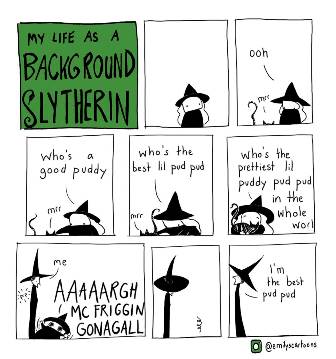 This is because the ways in which we interact with comics have been vastly expanded by digital technology. Comics are now produced and circulated through a number of different platforms, including apps, websites and social media, allowing them to reach further than their traditional audience. These platforms have made digital comics simultaneously both more and less accessible than their print equivalents; many webcomics are available for free online, which means readers no longer have to pay between £8 and £25 for a graphic novel, but does require them to have already paid for a computer/tablet/smartphone and internet connection (or have access to one at their local library, provided their local library wasn’t a victim of austerity measures).

Alongside access to reading comics, access to publishing has also changed. Anyone with access to a computer and internet connection can now publish a comic online. This has opened up comics production to many whose voices may not have often been heard in mainstream print comics, including writers and characters of colour, women, members of the LGBTQ+ community, those with disabilities, and creators who simply cannot give up the stability of full-time employment to commit the time needed to chase their dream of being a comics creator. The result is a vibrant array of digital comics, enormously varying in form and having a significant social and cultural impact.

But digital comics are also far more fragile than their print companions, and this is where the proper serious work part of my placement comes in. Comics apps are frequently removed from app stores as new platform updates come in. Digital files become corrupted, or become obsolete as the technology used to host them is updated and replaced. Websites are taken down, leaving no trace (all those dire warnings that the internet is forever are not exactly true. For more details about the need for digital preservation, see an earlier post to this blog). So in order to make sure that all the fantastic work happening in digital comics now is still available for future generations (which in British Library terms could mean ten years down the line, or five hundred years down the line), we need to find ways to preserve what is being created.

One method of doing this is to establish a dedicated webcomics archive. The British Library already has a UK Web Archive, due to the extension of legal deposit in 2013 to include the collection of non-print items. I am currently working on setting up a special collection of UK webcomics within that archive. This has involved writing collections guidelines covering what will (and won’t) be included in the collection, which had me wrestling with the thorny problem of what exactly a digital comic is (comics scholars will know that nobody can agree on what a print comic is, so you can imagine the fun involved in trying to incorporate digital elements such as audio and video into the mix as well). It has also involved building the collection through web harvesting, tracking down webcomics for inclusion in the collection, and providing metadata (information about the collection item) for cataloguing purposes (this last task may happen to require reading lots of comics).

Alongside this, I am looking into ways that digital comics apps might be preserved, which is very proper serious work indeed. Not only are there many different versions of the same app, depending on what operating system you are using, but many apps are reliant not only on the software of the platform they are running on, but sometimes the hardware as well, with some apps integrating functions such as the camera of a tablet into their design. Simply downloading apps will provide you with lots of digital files that you won’t be able to open in a few years’ time (or possibly even a few months’ time, with the current pace of technology). This is not a problem that can be solved in the duration of a three month placement (or, frankly, given my total lack of technical knowledge, by me at all). What I can do, however, is find people who do have technical knowledge and ask them what they think. Preserving digital comics is a complicated and ongoing process, and it is a great experience to be in at the early stages of exploration.

And you can be involved in this fun experience too! If you are a digital comics creator, publisher, or reader, we would love to hear from you. We’d like to know more about the digital comics that you create, find out links to add to our Web Archive collection, and find examples of comic apps that we could collect. Please email suggestions to Jennifer.Aggleton@BL.uk. For this initial stage of the project, we will be accepting suggestions until the end of August 2017. In that time, we are particularly keen to receive web addresses for UK published webcomics, so that I can continue to build the web archive, and do the proper serious work of reading lots and lots of comics.