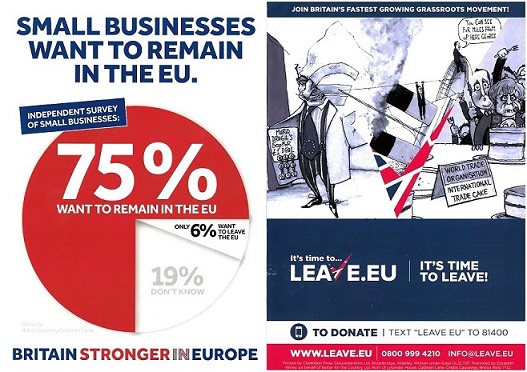 Pictured: Official EU referendum campaign leaflets – Remain (left hand side) and Leave (right hand side). Do you see any similarities?

My name is Alexandra Bulat and I am a PhD student at the School of Slavonic and East European Studies, University College London. My research is on attitudes towards EU migrants in the UK, based on fieldwork in Stratford (London) and Clacton-on-Sea.

The 2016 EU referendum campaign represents an important period when attitudes towards the topical ‘uncontrolled EU migration’ were shaped, expressed, and passionately debated. In this context, websites and social media played a key role in presenting the public with arguments about EU migrants and migration. Can we find the same campaign information today by browsing web resources? Some campaign websites have since been amended, renamed, redesigned, or simply disappeared from the visible online space. Here is where the UK Web Archive can help researchers like me who analyse particular events in history, such as the EU referendum.

In June 2017, I started a three month placement with the British Library Contemporary British Collections. The project is titled Researching the EU Referendum through Web Archive and Leaflet Collections. I use the EU referendum web archive and 177 digitised leaflets and pamphlets (available in the LSE Digital Library ‘Brexit’ collection) to answer the following research question: Who is speaking about EU migration and how?

In the first stage of research, I created a spread sheet for the leaflets and pamphlets, recording basic information such as title, organisation, and their position in the campaign. I also included all the content about freedom of movement, migrants, refugees, and closely linked topics. Overall, almost two thirds of the materials supported remaining in the EU, with only five categorised as ‘neutral’ and the rest arguing for leaving the EU. Just under half of these materials mentioned immigration, with more ‘Leave’ than ‘Remain’ sources. About a fourth of the items were clearly targeted to a specific region or town/city, the most common being London, Cambridge and various locations in Wales.

The second stage involved using the UK Web Archive to search for the websites and social media (in particular, Twitter handles) that were explicitly mentioned in the printed material, or that I could easily infer from the information available. Only six leaflets did not mention an online presence and I was unable to find it any evidence of it. However, the large majority of them had website(s) or social media mentioned in the printed publication. I ended up with a list of 49 main websites and social media presence for over half of them. Almost all those websites were archived, so I could see the exact information which had been live during the referendum. Most websites were available in the UK Web Archive, but some archived copies were only found in the Internet Archive. For comparison purposes, I looked at the latest record each website had before June 23rd. For some this was as close as 22 June, offering a real snapshot of the debate right before the polling day, but others were not archived in 2016 at all (but had earlier records).

There is a variety of websites, from the official Vote Leave (www.voteleavetakecontrol.org) and Britain Stronger In Europe (www.strongerin.co.uk), to less familiar campaigns such as University for Europe (www.universitiesforeurope.com) and The Eurosceptic (www.eurosceptic.org.uk). A majority of these websites are in the Library’s ‘EU Referendum’ special collection, which brings together a range of websites such as blogs, opinion polls, interest groups, news, political parties, research centres and think thanks, social media and Government sources, who all wrote about the Referendum. Nevertheless, some smaller campaigns, or websites that are not necessarily dedicated to the Referendum but included some content about it, were not included the special collection.

One example of the importance of archiving the web is www.labourinforbritain.org.uk . Although this is a rather well known campaign (which even has its own Wikipedia page, where this website is quoted), its website is not ‘live’ anymore. 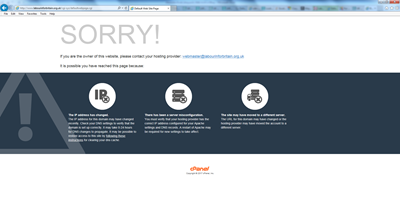 The UK Web Archive only started making records of it in 2017, but it had already displayed an error message. However, the Internet Archive has snapshots from before it disappeared from the live web. The Labour In campaign is an important resource for my research – it is one amongst a small number of sources making a more positive case about EU migration, which is essential to compare and contrast to the less favourable arguments made by other campaigners. Although the main Labour Party website had a tab about the Referendum, it did not include the same content as this campaign website, entirely dedicated to referendum issues. In addition to finding information that is not ‘live’ anymore, the web archive helps to contextualise the leaflets and complement the information provided in those printed campaign materials. The Bruges Group webpage is a good example in this sense. The digitised leaflet collection has four different leaflets from them. However, a comprehensive list of viewable leaflets is available on the archived website. In this case, the information was still on the live web when I last checked (apart from a slight change in formatting). However, no one knows for how long it will remain there, particularly after ‘Brexit’ is not anymore in the public debate.

By helping recover seemingly ‘lost’ information, complementing other datasets, contextualising the research and possibly many other roles, web archives are valuable resources that researchers should be encouraged to explore in greater depth. To mark the end of my PhD placement, I am helping to put together a roundtable discussion at the British Library with EU referendum collection curators and academics from a number of institutions, to create the space for conversation around future use of web archives in academic research and beyond.