Between 2003 and 2013 – before the Non-Print Legal Deposit regulations came into force – the UK Web Archive could only archive websites by explicit permission. During this time, the Web Curator Tool (WCT) was used to manage almost the entire life-cycle of the material in the archive. Initial processing of nominations was done via a separate Selection & Permission Tool (SPT), and the final playback was via a separate instance of Wayback, but WCT drove the rest of the process.

Of course, selective archiving is valuable in it’s own right, but this was also seen as a way of building up the experience and expertise required to implement full domain crawling under Legal Deposit. However, WCT was not deemed to be a good match for a domain crawl. The old version of Heritrix embedded inside WCT was not considered very scalable, was not expected to be supported for much longer, and was difficult to re-use or replace because of the way it was baked inside WCT.1

The chosen solution was to use Heritrix 3 to perform the domain crawl separately from the selective harvesting process. While this was rather different to Heritrix 1, requiring incompatible methods of set-up and configuration, it scaled fairly effectively, allowing us to perform a full domain crawl on a single server2.

This was the proposed arrangement when I joined the UK Web Archive team, and this was retained through the onset of the Non-Print Legal Deposit regulations. The domain crawls and the WCT crawls continued side by side, but were treated as separate collections. It would be possible to move between them by following links in Wayback, but no more.

This is not necessarily a bad idea, but it seemed to be a terrible shame, largely because it made it very difficult to effectively re-use material that had been collected as part of the domain crawl. For example, what if we found we’d missed an important website that should have been in one of our high-profile collections, but because we didn’t know about it had only been captured under the domain crawl? Well, we’d want to go and add those old instances to that collection, of course.

Similarly, what if we wanted to merge material collected using a range of different web archiving tools or services into our main collections? For example, for some difficult sites we may have to drive the archiving process manually. We need to be able to properly integrate that content into our systems and present them as part of a coherent whole.

But WCT makes these kind of things really hard.

If you look at the overall architecture, the Web Curator Tool enforces what is essentially (despite the odd loop or dead-end) a linear workflow (figure taken from here). First you sort out the permissions, then you define your Target and it’s metadata, then you crawl it (and maybe re-crawl it for QA), then you store it, then you make it available. In that order. 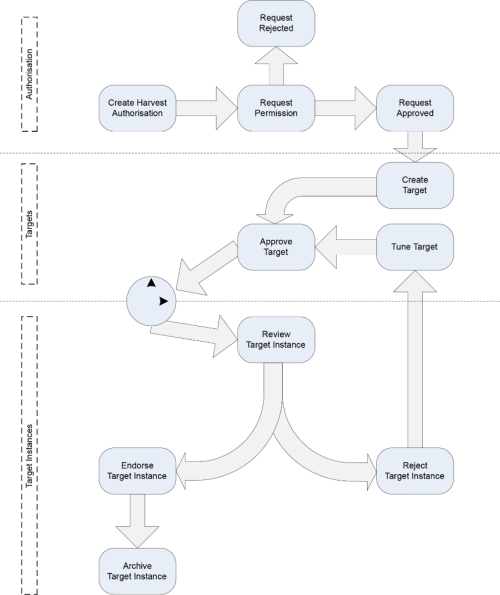 Looking at WCT, the components we needed were there, but tightly integrated in one monolithic application and baked into the expected workflow. I could not see how to take it apart and rebuild it in a way that would make sense and enable us to do what we needed. Furthermore, we had already built up a rather complex arrangement of additional components around WCT (this includes applications like SPT but also a rather messy nest of database triggers, cronjobs and scripts). It therefore made some sense to revisit our architecture as a whole.

So, I made the decision to make a fresh start. Instead of the WCT and SPT, we would develop a new, more modular archiving architecture built around the concept of annotations…