Trains, Tea, Depression and Cats – what do UK Interactive Fiction writers write about?

Background
Works of Interactive Fiction (IF) are stories that allow the user to guide or affect the narrative by making choices, clicking links or otherwise navigating the text. As part of the 'Emerging Formats project', I’ve been investigating UK Interactive Fiction (IF) in order to help determine potential collecting priorities, and attempting to collect works for the UK Web Archive. This has allowed me to discover who is creating interactive fiction, what kinds are they creating, and what tools they’re using.

As might be expected, IF creators come from a wide variety of backgrounds and create works for a wide variety of reasons. Some create interactive fiction to educate, to experiment with particular IF tools, to create portfolio pieces to support their professional writing and design careers, to sell their work, or simply to share an idea or story. Both the tools used and the approaches to using these tools are extremely diverse, as were the genres and topics covered by the works (see fig 1) However, as I studied the 200+ items found during the course of the project, several recurring themes began to emerge. 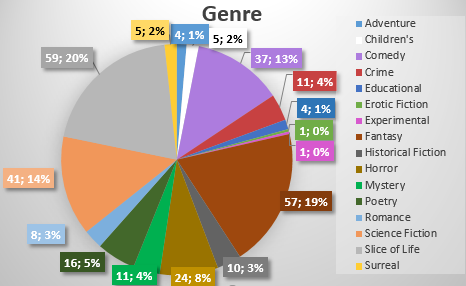 Themes
Public transport features in a number of works, but trains are represented particularly strongly. In both Eric Eve’s, Nightfall and Jonathan Laury’s Ostrich trains are indicative of wider problems in society. Nightfall is a thriller where an unknown threat lurks in the city and that threat is made all the more ominous by the fact that the protagonist’s only means of escape – the train, is cut off at the opening of the story. In Ostrich, much of the scene-setting takes place on the protagonist’s commutes to and from work. As a totalitarian regime gradually takes over, who is and isn’t on the train, and how they behave during the journey becomes increasingly crucial. (Ostrich was created following the British Library’s Interactive Fiction Summer School in 2018).

In Journey Through Your Final Dream by Sammi Narramore and Awake the Mighty Dread by Lyle Skains, trains are presented as a dreamlike (or nightmarish) liminal space. Both works play around with the idea of falling asleep on a train and awaking disoriented and unsure whether the dream is truly over.

Many of the works live up to a particularly British stereotype by foregrounding tea. Joey Jones’ Strained Tea asks the user to perform the simple task of making a cup of tea. However, as this is a parser-based piece, the only commands available are to ‘take’, ‘put’ and move using the compass directions, turning this everyday act into a fiendishly difficult puzzle. Tom Sykes’ Fog Lights and Foul Deeds is a Lovecraftian tale set on a narrowboat, where the player-character and his crew must face the horrors lurking in the canal as they struggle to reach their destination. Tea serves as a resource which bolsters the crew’s resolve, increasing their morale and improving their chances of survival. Providing enough tea to keep the team sane, while also ensuring supplies don’t run out before journey’s end is a careful balancing act throughout the piece. Damon Wakes’ Lovely Pleasant Teatime Simulator begins as a very civilised affair where the reader-player may take tea with scones and compliment their host’s décor, but as the tea keeps coming and the banal chitchat loops around and around, new choices begin to emerge which will end the tea party in a variety of scandalous ways.

A huge number of the works deal with personal issues and experiences, with gender and sexuality occurring often, but mental health being the most prevalent topic. Many creators use the interactive affordances available to them to help convey how it feels to suffer from mental health issues. Joseph J Clark’s Depression Simulator is a short, looping piece in which no matter what option is chosen, text appears which reads: ‘You can’t. You are too sad’. Miles Aijala’s Fatigue takes a similar approach in that when the option ‘go out’ is selected, the text changes to ‘haha yeah right’ becoming greyed out and unselectable. Emma Winston’s What it Feels Like in Here is a poetic, meditative piece in which the reader-player guides a somewhat abstract avatar through a series of rooms which become smaller and smaller and darker and darker, echoing the feelings of anxiety, depression and claustrophobia discussed. 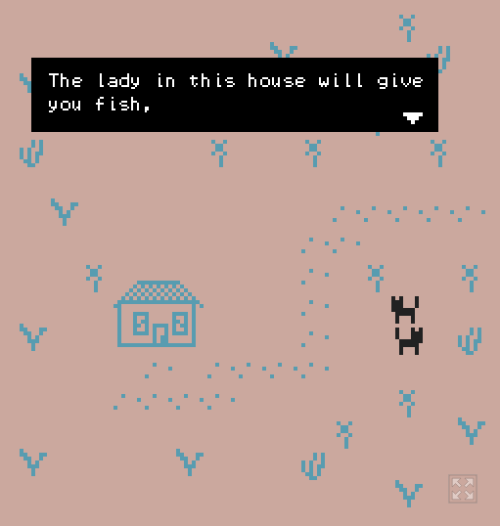 Since these works live on the internet, it’s perhaps no surprise that many are replete with cats. Creator Ben Bruce’s work is very cat-oriented, with highlights including Bedtime, Kitties, Said the Witch, where a gathering of talking felines pester their witch owner for a bedtime story, and Something That a Cat Once Told Me About Midnight, a legend translated from the original cat about why time behaves strangely around midnight. Freya Campbell’s Pépito incorporates the Twitterbot @PepitoTheCat into a Bitsy story to imagine a day in the life of an internet cat and reflect on the death of her own pets.

Finally, many of the works are self-reflexive and describe either the experience of writing interactive fiction, reading it, or being involved with its community. The Cat Demands by Adam Hay not only features an attention-seeking cat, it’s also about a Twine author’s struggles to complete their latest piece. A Short Journey by Cameron Home critiques the structure of many interactive narratives and questions whether what they’re offering can really be considered ‘choice’.

While the works themselves may offer only an illusion of choice, the collection as a whole offers a genuine range of works to choose from. I hope you’ll explore them via the UK Web Archive, and Webrecorder, or in their original locations using the links in this blog post. (Please note that as this is an experimental project, some works may not be fully accessible via the Web Archive. For the best viewing experience, visit the live versions of the sites).