15 Years of the UK Web Archive - The Early Years

Think back 15 years to the beginning of 2005. Future Prime Minister David Cameron wasn't yet Leader of the Conservative party and Google Maps, Twitter and the iPhone all had yet to be launched. It was, however, the year that we started collecting copies of UK published websites for permanent preservation and access. 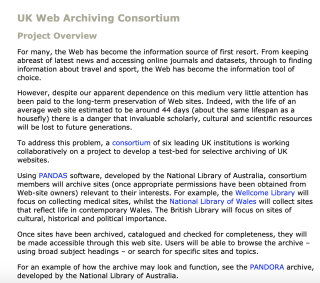 A multi-disciplinary team was formed to look into the many challenging technical and curatorial issues involved in archiving websites. The learning curve in this field can be steep and was especially so then. At the time only a few other organisations were in this field, including the Internet Archive and the National Library of Australia (NLA). In fact, initially, it was a tool developed by NLA - Pandas software - that we used in those early days. Later on we switched to using Heritrix to collect the web (and still do).

One of the special elements of archiving the web is that whilst it can be difficult, this very challenge encourages co-operation and partnership. We have been very grateful for all of the input and help along the way.

What to archive?
In this early era of web archiving, website 'targets' were carefully selected by curators and the owners were asked for permission for us to archive and publicly display them. If the website owner refused, which is very rare, or didn't respond then the website couldn't be archived.

Overall, the responses that we received from website owners were overwhelmingly positive and led to the formation of key early collections such as the 2005 General Election and the 7 July London terrorist attacks. 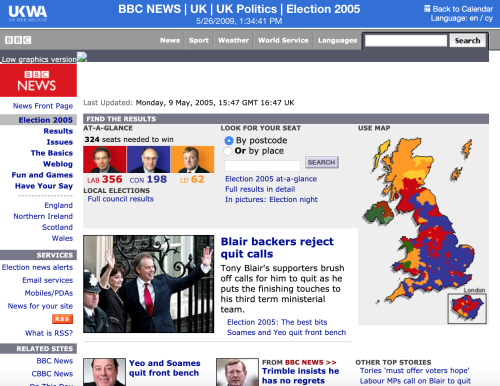 Where next?
By early 2005 the first websites were being captured and stored, however, it wasn't until May 2005 that we first displayed them to the public.

The evolution of the UK Web Archive website and how we developed a growing number of 'special collections' (as they were initially known) will be the subject of future blog posts over the next few months.