In all, there are six awards, which are presented every two years. 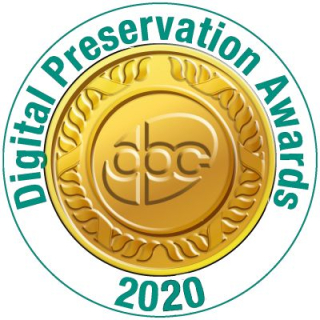 ‘The National Archives (UK) Award for Safeguarding the Digital Legacy celebrates the practical application of preservation skills to protect at-risk digital objects, drawing attention to the concrete efforts to ensure important elements of our generation’s digital memory can remain available for future generations. It is also for demonstrating a deep understanding of the risks that digital objects face and (the winner) should be an exemplar of digital preservation best practice and why preservation matters.’

The winners were announced by judge April Miller, from the World Bank Group, who invited Ian Cooke, the British Library’s Head of Contemporary British Published Collections, to give an acceptance speech.

‘It’s a huge honour for us to be recognised in this way, and to have been among such excellent finalists, such amazing projects, really inspiring ones.

‘We always say it’s not possible to understand the 21st century without the archived web, and we’ve been posting to our blog all week about the diversity and variety of our collections.

‘I’m personally always amazed and incredibly proud of the work Andy Jackson and Nicola Bingham lead for the Web Archive, and also for our whole team, both at the British Library and across the UK legal deposit libraries, and the friends we work with – the International Internet Preservation Consortium, an incredible community – and everyone we’ve worked with around the world for the past 15 years for digital preservation access and development.

Thank you so much.’

The UK Web Archive (UKWA) was formed in 2003 as a response to growing awareness of an urgent digital preservation need, to collect and preserve communication using the web.

Read more about the last 15 years of UKWA in these blog posts: