For two years, I have been studying the media coverage of London and Rio’s Olympic legacies. See the previous posts, where I explained the project’s main objective of understanding and conceptualizing the meaning of the word legacy based on the news coverage of the Games. I have also written about how controversial the word 'legacy' can be once it is a term under dispute by several actors in the political arena. In the most recent post, I introduced the use of SHINE as a platform for exploratory analysis of news events and I briefly described how it was a useful tool for my research project. The Approach
In this post, I aim to discuss the different approaches taken by news organisations, government websites and activist blogs to the legacy of the London Olympics. Although my initial interest was mainly focused on understanding the journalistic framing of legacy, looking at other sources has proved to be beneficial in a comparative perspective. For this purpose, I searched for articles on ‘Olympic legacy London’ via SHINE and selected, among the 10 domains provided by the platform, three news websites (bbc.co.uk, guardian.co.uk and independent.co.uk), one official government website (uksport.gov.uk) and one activist blog (gamesmonitor.org.uk).

The Research
Texts were collected, processed, cleaned and filtered using Python scripts and combined with articles extracted from the live web. The data was ranked and the top 50 bigrams (co-occurrence of two words) mentioned in the texts were transferred to a spreadsheet using the Natural Language Toolkit (NLTK) - a suite of Python libraries for linguistic analysis. The list of trends was then used in a first distant reading to give a sense of the most discussed topics and then combined later on with a more qualitative approach of close reading for a deep understanding of context. 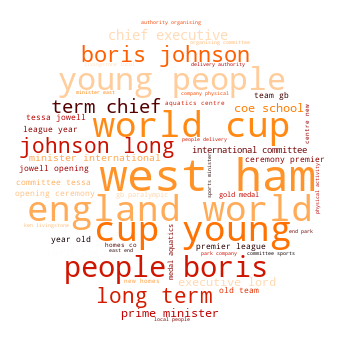 Findings
These bigrams have revealed a significant difference in the way the Olympic legacy of London was approached by different sources from 2004 to 2020. Among the most cited bigrams by news publishers are ‘young people’ and ‘school sport’, both referring to the promises included in the legacy plan of London published in 2008 by the Department for Culture Media and Sport (DCMS). Promises number 1 and 3, entitled ‘making the UK a world-leading sporting nation’ and ‘inspiring a generation of young people’, included the engagement of young people in physical activities by increasing the offer of high-quality sports. The drop in the number of 16 to 25-year-olds playing sport after the games was one of the main topics highlighted by the media.

While both ‘young people’ and ‘school sport’ are a response to the legacy plan published by the DCMS, the most mentioned bigram in the list of texts analysed did not receive much attention in the document: ‘west ham’.

The destiny of the Olympic Stadium became one of the most controversial events around the Olympic legacy of London. Initially, the disagreement on whether it should remain as an athletics venue or be handed over to West Ham United drew the attention of the media with important voices like the Olympics Minister Tessa Jowell and ex-London mayor Ken Livingstone supporting the opposition against the football club. The dispute between West Ham and Tottenham for the Olympic Stadium and the threat of becoming a ‘white elephant’ - a recurrent fear in recent Olympic history shed light on the place as a symbol of London’s Olympic legacy.

The media coverage of London’s legacy contrasts with the much more abstract and broader bigram found in the texts published by the British government: ‘international inspiration’. Articles published by uksport.gov.uk have revealed as focused mainly on The International Inspiration programme, a project to promote sports in ‘some of the most disadvantaged communities in the world’. While the media seemed to be looking for internal issues, the government was targeting international audiences. The choice of the word ‘inspiration’ references a much more immaterial and abstract idea of legacy that contrasts with the very concrete discussion around the Olympic Stadium hosted by the media.

Looking at the bigrams obtained from activist blogs, the concerns are shown to have been more local, targeting primarily challenges faced by citizens of East London. Among the main bigrams are ‘Stratford City’, ‘new jobs’ and ‘public housing’. The community-focused approach highlights a significant discrepancy between the framing of the event. These are preliminary steps to understand the multiple ways in which London’s legacy has been understood and narrated. The different perspectives indicate a distance between immediate public interest and government official communication regarding the most important sporting event in the world.

The Summer Olympic Games are hosted every four years by a different global city bringing together its promises to be an urban development catalyst and also the past events frustrations. Understanding the communication processes around the Olympics is fundamental for the future planning of effective legacies that correspond to the interests of the nations’ citizens.

*This post summarizes the preliminary results presented in my talk at ‘Documenting the Olympics and the Paralympics’, an event organised and hosted by the British Library in collaboration with the British Society of Sports History (BSSH), the International Centre for Sports History and Culture at De Montfort University (ICSHC) and the School of Advanced Study (SAS).

**This research is part of the CLEOPATRA Innovative Training Network, funded by the European Union’s Horizon 2020 research and innovation programme. It has been conducted under a PhD developed at the School of Advanced Study, University of London. For more information: cleopatra-project.eu.