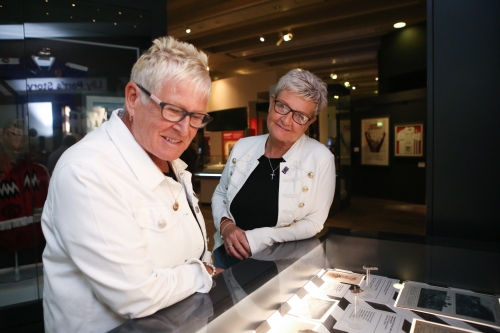 The UK Web Archive has been collaborating with the UEFA Women’s EURO 2022 Arts and Heritage Programme to develop the UEFA Women's Euro England 2022 web archive collection. In this guest blog post, we hear about the wider arts and heritage programme around the tournament from Caterina Loriggio.

The £3m programme was supported by National Lottery players through Arts Council England and National Lottery Heritage Fund grants and through funding from the Host Cities. It included four arts commissions, eight museum/archive exhibitions, eight outdoor exhibitions, heritage outreach and education programmes, 45 memory films and new online content covering the history of the women’s game. The project also researched for the first time the full line-up of all the women who have played for England over the past 50 years. Many of those women will be honoured at Wembley Stadium on October 7th in front of a sell-out crowd when they will take a lap of honour during half time in the England USA match.

It was the first time The FA had ever delivered a cultural programme. A key priority for The FA is to establish female role models for both girls and boys. When Host City partners requested a cultural programme to support the tournament the Association saw that this could be a great opportunity to further fulfil this objective. It was also clear that partnering with cultural organisations in Hosts Cities, and national institutions such as the UK Web Archive and British Library would also be a great way to promote the UK’s cultural sector and would be a very effective tool to capture, for the first time on a national scale, the hidden history of women’s football.

Prior to writing funding applications, I led, with the support of the Football Supporters’ Association, four online fan consultations to ensure the programme spoke to the wants of women’s football fans. We also commissioned the organisation ‘64 Million Artists’ to lead half-term virtual workshops for young people aged 12 – 18 in Host Cities (many of whom played football). The fans and young people’s feedback was shared with artists, archivists and curators and was clearly reflected in all elements of the programme. The fans were clear that they could ‘never get enough history’.

Archives and contemporary collecting played an important part in the heritage programme. It was apparent many stories of women’s football (fans as well as players) had been lost already and that women who had played during the ban (1921-1970) were of an age that if we did not collect their stories now, then there was a real risk that they might never be captured. As well as collecting physical objects for museums and archives like caps, pennants, and programmes, there was a significant degree of online archiving. Many of the Host Cities created online exhibitions, hosted films, and imagery on digital archive platforms and digitally captured objects which retired footballers were happy to loan but not donate. Nationally we made 36 memory films live on The FA website. These will be moved to EnglandFootball.com in time for the 50th Anniversary of the Lionesses in November, plus there will be some new content made especially for the anniversary. We were greatly supported in our programme by The National Football Museum and Getty Images who gave us access to their photography archives, which greatly enriched all our work. We also sought to create content for the future by commissioning Getty photographers and by running fan and young people’s photography campaigns to capture the atmosphere of match day and the fan experience beyond the pitch. Some of these images will be shared in an online Getty Images Gallery to be launched in November.

It is hoped that the learnings from this programme will help to secure cultural content in future UK bids for major sporting events. I hope that archiving and collecting will remain important components in all these future projects.

Related Links
This is the ninth blog post published so far about the women’s Euros, the others can be found on the UK Web Archive blog under the 'sports' tag.

There is still an active call for nominations for the UEFA Women's Euro England 2022 web archive collection. Anyone can suggest UK published websites to be included in the archive by filling in our nomination form.